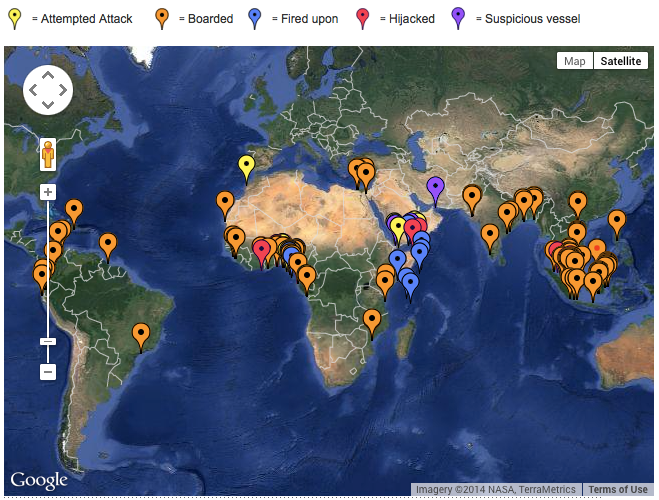 
Global piracy at sea fell to the lowest level in six years in 2013, largely because of an international crackdown on pirate gangs that once operated with impunity off the coast of Somalia, a maritime monitoring organization reported on Wednesday.

“The single biggest reason for the drop in worldwide piracy is the decrease in Somali piracy off the coast of East Africa,” Pottengal Mukundan, the director of the International Maritime Bureau, said in a statement.
He attributed the drop in Somali piracy to greater deterrence by international naval vessels deployed near Somalia; toughened security measures aboard many formerly vulnerable vessels, including the use of private armed guards; and a relative improvement in the political stability of Somalia, a country torn by years of dysfunction, anarchy and jihadist militancy.

Piracy off West Africa, however, which has been increasing in recent years, showed no sign of easing, mostly because of a surge in Nigerian pirate gangs.
They accounted for 31 of that region’s 51 reported attacks, many of them targeting vessels serving Nigeria’s oil industry.
The report said Nigerian pirates also ventured farther from home, attacking vessels off the coasts of Gabon, Ivory Coast and Togo.

A report last June by the International Maritime Bureau and two other piracy monitoring groups, Oceans Beyond Piracy and the Maritime Piracy Humanitarian Response Program, said that in 2012 the number of ships and sailors attacked by pirates off West Africa exceeded those attacked off Somalia for the first time.