Director Paul Greengrass says he thought the film would feel more authentic if it was all shot at sea.
He had personal motivations, too: "My father was in the Merchant Marine and was at sea all his life so I wanted to explore his world," he says.

“Captain Phillips,” a movie that insistently closes the distance between us and them, has a vital moral immediacy.
It was directed by Paul Greengrass, the British filmmaker who quickened the pulse of contemporary action cinema with the second and third installments in the Bourne franchise, features that proved yet again that big-screen thrills and thought need not be mutually exclusive.
Kinetic action and intelligence are similarly the driving forces in “Captain Phillips,” which, like Mr. Greengrass’s Bourne movies, shakes you up first with its style and then with its ideas.

The story is based on shivery, true events that unfolded in early April 2009, when four armed Somalis seized the Maersk Alabama, an American container ship under the command of Richard Phillips.
The ship, with an unarmed crew of just 20 sailors, was hauling tons of cargo in hundreds of containers, including food from the United Nations World Food Program designated for African countries.
To the Somalis, the ship apparently looked like a floating jackpot.
What happened next played out in world news, and Captain Phillips went on to write, with Stephan Talty, a plodding, straightforward book with the telegraphing title “A Captain’s Duty: Somali Pirates, Navy SEALS, and Dangerous Days at Sea.” 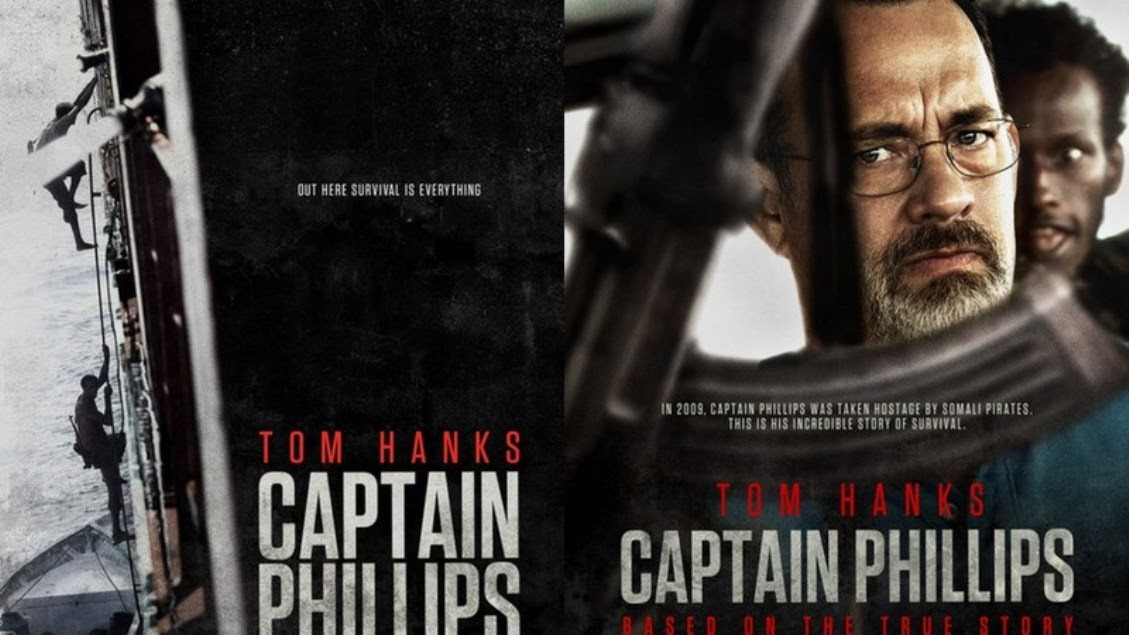 “Captain Phillips” is based on “A Captain’s Duty,” and while they trace a similar narrative arc and share numerous details, they’re worlds apart in terms of sensibility.
Written by Billy Ray (whose credits include “Shattered Glass”), it opens with a postcard-perfect shot of a white Vermont house.
Inside, Captain Phillips (Tom Hanks) is packing up and checking his route.
He and his wife, a nurse, Andrea (Catherine Keener, who’s there to underscore Phillips’s decency), are soon on their way to the airport and murmuring about their children, the future and a fast, scarily changing world.
There’s a stiltedness to their talk — and Mr. Hanks leads too hard with a broad Boston accent — yet the scene’s intimacy, and the couple’s vulnerabilities, immediately humanize Phillips.

Mr. Greengrass likes to work fast.
One minute Phillips is hugging his wife at the airport and the next he’s walking the decks of the Maersk Alabama, testing its unlocked security gates and running his crew through a safety drill. Almost as soon as the crew finishes the exercise, it’s confronted with a real-world threat: two rapidly approaching skiffs.
Phillips and the crew dodge the skiffs by increasing their speed (the real ship’s speed topped out at 18 knots, or about 21 miles per hour) and shifting course to churn up destabilizing waves.
Badly rocked, their jerry-built engines sputtering, the skiffs turn back, but the next day, one returns with four heavily armed Somali men.
Led by Muse (the newcomer Barkhad Abdi, very, very fine), the Somalis board the Alabama, initiating a harrowing siege.

At the time of the hijacking, a lot of the news reports focused on Captain Phillips and the nominal exoticism of a 21st-century piracy that had nothing to do with illegal downloads, football or Johnny Depp swashbuckling through a Disney franchise.
The existential realities that inform contemporary Somali piracy turn out to be one of the unexpected themes of “Captain Phillips,” which begins as something of a procedural about men at work and morphs into a jittery thriller even as it also deepens, brilliantly, unexpectedly, into an unsettling look at global capitalism and American privilege and power.
Phillips is unambiguously a heroic figure, but he’s scarcely the sole point of interest in a movie that steadily and almost stealthily asserts the agonized humanity of his captors.

This humanization hits you like a jolt.
The shock isn’t that the pirates are people, however corrupted.
But that even as the movie’s rhythms quicken along with your own — Mr. Greengrass works you over like a deep-tissue pugilist with smash cuts, racing cameras and a propulsive soundtrack so you feel the urgency as well as see it — an argument is being created.
There is, you realize, meaning here beyond the plot, meaning in the barren Somali hamlet in which Muse and his companions congregate under warlord gunpoint and in the razored angles of their startling, gaunt faces.
There’s meaning, too, in the wild eyes and stained teeth of men who never eat, but stuff their thin cheeks with khat, the amphetaminelike plant that, among its uses, helps suppress the appetite.
After the Somalis take over the Alabama, the action downshifts and the story settles uneasily into a tense standoff with Muse and Phillips now staring warily at each other across the ship’s bridge rather than across the water through binoculars.
Mr. Hanks is one of the few movie stars who, like Gary Cooper once upon a Hollywood time, can convey a sense of old-fashioned American decency just by standing in the frame.
There’s something so unforced about him that it can seem as if he’s not delivering a performance, just being Tom Hanks.
This feeling of authenticity, however well honed and movie made, dovetails with Phillips’s gruff likability to create a portrait of a man trying to keep himself, his crew and his ship together even as the world he knew comes violently undone.


That reality grows progressively more uneasy with the arrival of the American military, which descends with expected might in warships that loom over the crisis like idled, waiting giants.
Throughout “Captain Phillips,” Mr. Greengrass plays with scale, proportion and camera angles to underscore the differences at play in the story; there’s an early aerial shot of Phillips walking on the deck of the Alabama and dwarfed by a ship that in turn drifts like a speck on the water.
Later, these extremes accentuate the paradoxes of the story — the tiny Somalis scrambling aboard an enormous American ship — that grow more pointed and political, as when a group of hugely muscled Navy personnel arrive and begin gearing up for a finale in which there seem to be many Goliaths but no David.
What comes after isn’t a surprise, even if “Captain Phillips,” which revs you up with frenzied action and violent spectacle, does surprise by denying you the usual action-movie high.
Because just as the movie races toward its foregone conclusion, it also begins siphoning off the excitement it has been building up all along.
The big men with the big guns do their part, but the skin-prickling, carnal excitement that almost inevitably comes with certain types of screen violence never manifests, replaced instead by dread, anxiety, a shaking man and whole a lot of blood.
It’s the kind of blood that most movies avoid and that, Mr. Greengrass suggests, is what remains unseen in global traumas like this.
Some viewers may pump their fists but, I think, he wants this victory to shatter you.

This footage was shot by real pirates, off the coast of Somalia.