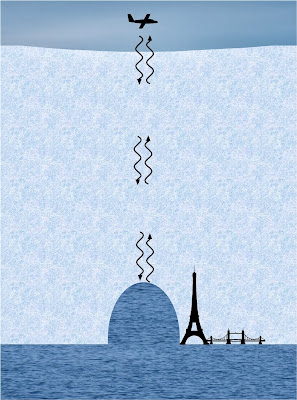 One channel was nearly as tall as the Eiffel Tower — about 820 feet (250 meters) high and 985 feet (300 m) wide.
The team's next step was to create a computer model to predict how the ice would respond to an underground, streamlike water flow where it transitions from land to sea.
The modeling results suggest that long, linear features like the meltwater channels would appear, Le Brocq said.
"We need to think about water flowing under the ice sheet in more focused channels than in a thin layer," Le Brocq said.
"Because these features meander, we can also see how the nature of the exit point moves over time."
While scientists agree that the meltwater channels in ice shelves are long-lived features, the level of detail available in the Antarctic surveys used in the study leaves a lot of uncertainty, said Eric Rignot, a glaciologist at NASA's Jet Propulsion Laboratory in Pasadena, Calif., who was not involved in the study.
"We can see a few of the big channels, but the maps are still very crude," Rignot said.
"We really don't have the level of detail of the bed beneath the ice sheet to say much about water flowing at a steady rate. I think they've put their finger on the case a little more strongly, but they still come a little short in proving it."
Posted by Peio at 1:37 AM