The bedrock beneath Antarctica.
Our understanding of what lies beneath the world's biggest ice sheet has taken another leap forward. This video strips away Antarctic ice to reveal a new, and much more detailed map of the bedrock below.
This map, called Bedmap2, was compiled by the British Antarctic Survey and
incorporates millions of new measurements, including substantial data sets from NASA's ICES at satellite and an airborne mission called Operation IceBridge.
Credit: NASA's Goddard Space Flight Center

Buried under miles of ice, Antarctica's mysterious mountain ranges are coming into sharper focus thanks to a new map.

Created by the British Antarctic Survey, Bedmap2 drew upon millions of new measurements of the frozen continent's surface elevation, ice thickness, and bedrock topography from a wide variety of sources collected over several decades.

Due to technological advances, Bedmap2 is also higher in resolution, more precise, and covers more of the continent than the original Bedmap, produced more than ten years ago, according to Charles Webb, deputy program scientist for cryospheric sciences at NASA headquarters. Earth's frozen regions are collectively called the cryosphere.

For example, the original Bedmap relied mostly on ground-based measurements, which limited the scientists in terms of how much land they could cover, Webb noted.

But a NASA program called Operation IceBridge sends out airplanes that fly over the entire continent.
The airplanes are equipped with lasers that measure the surface mountains' heights and other features, as well as ice-penetrating radar that maps subglacial bedrock—"giving [scientists] a more 3-D picture of the ice sheet itself," Webb said. 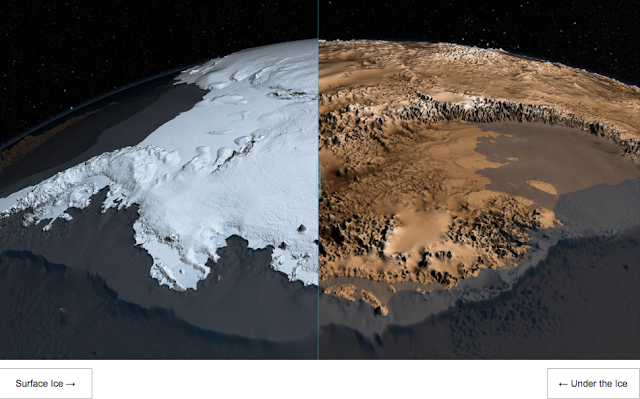 These images depict the differences between Antarctica's ice sheet with its underlying topography.
(Vertical scale has been magnified by a factor of 17 to make terrain features such as mountains and valleys more visible.)

In addition, the new data has revealed several smaller features—both on Antarctica's surface and buried under the ice—that were missed in the previous Bedmap effort.
(Also see "First Detailed Pictures: Antarctica's 'Ghost Mountains.'")

To Webb, "the piece that's exciting is that the increased resolution ... gives us better insight into what drives the flow of the ice."

For instance, scientists want to know the shapes of mountains and rocks to model how fast ice will move across these features on its way to the ocean, where the ice can melt and contribute to sea level rise, he said.

Overall, loss of polar ice has contributed about 11.1 millimeters (0.03 feet) to global sea levels since 1992, research shows. Sea levels are currently rising at a rate of 3.2 millimeters a year.