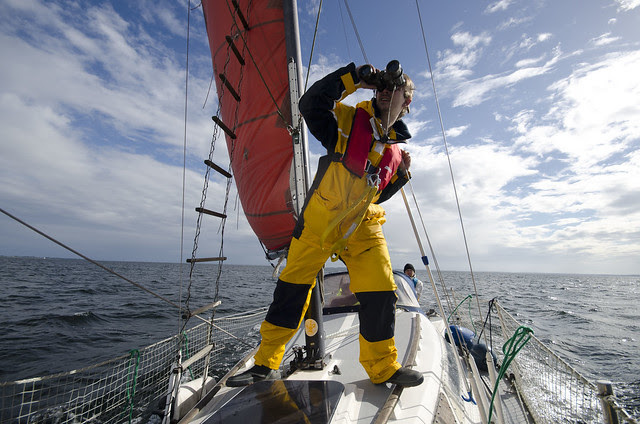 Hackerfleet is a Berlin-based collective of volunteer computer hackers, software developers and programmers crafting a new generation of ultra-smart sailing software on their own sailing yacht out in the middle of the ocean.
(photo : ijon-hackerfleet)

From CNN
Resting on the icy cool surface of the Baltic Sea, a rickety old boat of hardy sailors works long into the night.
Eyes strained, minds stretched, many have gone days without sleep.
But this is no ordinary vessel of sea-faring adventurers battening down the hatches as they get set to navigate stormy waters.
This is Hackerfleet -- a Berlin-based collective of volunteer software developers and programmers burning the midnight oil as they craft a new generation of ultra-smart sailing software.
"We work on a ship because it's fun and everybody likes that," said "Ijon" (an online pseudonym) the organization's co-founder.
"You can't leave ... [and] everyone is very focused. It's intense and we get very little sleep but the method is overwhelmingly beneficial as a source of ideas," he added. 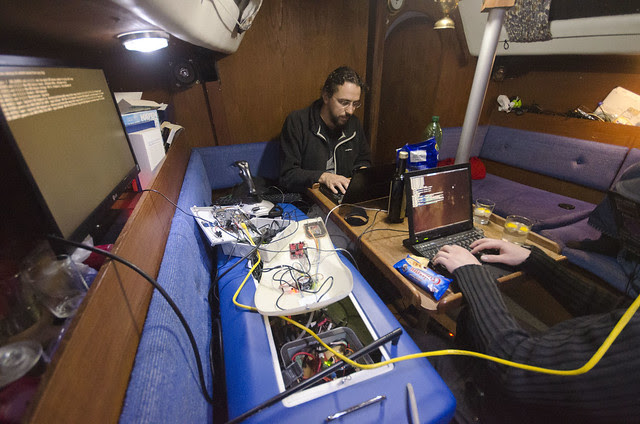 Founded by the covertly named Ijon and Riot, the group set sail to carry out their work at sea when they can.
Most cruises last between three and five days and can be attended by as many as 15 to 20 people depending on the scale of the work expected to be done.
(photo : ijon-hackerfleet)

Founded in the summer of 2011 by Ijon and his business partner "Riot", Hackerfleet offers a mariner's twist on the long-popular hackathon concept.
Groups of programmers and engineers gather to share skills, knowledge and embark on intense code writing sessions, casting off from shore when they can to carry out their work.
Most "Hacker Cruises" last between three and five days and can be attended by as many as 15 to 20 carefully selected people, Ijon said.
Each crew-member generally has a specialist skill or area of technical expertise.
This means they offer something unique and worthwhile to the project.
"It's an unusual workspace," said "Keyboardsurfer", a volunteer computer hacker and expert in android platforms. "(But) we're pushing each other to create something that amazes everyone."
"The possibility to communicate with every participant whenever it's needed makes the work on sea very effective," he added.
So far Hackerfleet's voyages have produced an android app that charts the location of buoys and sea-signs as well a "virtual helmsman" that can autonomously hold the course of any ship.
The group's ultimate aim, though, is to create a completely new type of sailing software that will connect all boats at sea -- essentially transforming them into floating data-collection devices.
This mass connectivity will enable Hackerfleet to gather, store and ultimately transmit back out to sea vast amounts of important marine information.

Some of the most detailed depth charts, maps, weather measurements, ocean safety warnings and wildlife monitors ever created are all within the realm of possibility should the plan come to fruition, Ijon claims.
"We want to develop the biggest database on oceans and sea information that is imaginable and theoretically possible," he said.
"If every ship (both commercial and recreational) shares what it knows then we can centralise this data at one point in the database allowing us to calculate things much more accurately.
"We can then send out this information to all ships that have our systems installed." 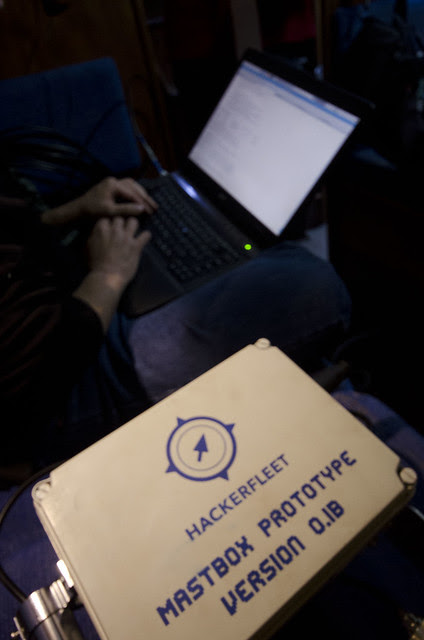 The group's ultimate aim is to popularize its Mastbox technology -- a completely new type of sailing software that will connect all boats at sea, essentially transforming them into floating data-collection devices.
(photo : ijon-hackerfleet)

Ijon says he expects the first consumer-ready prototype version of this "Mastbox and Shipbox" technology to be available by early 2014.
Commercial deployment is then expected to follow in either 2015 or 2016.
Popularizing the software once complete however will likely provide a whole new set of challenges, each requiring more than just a clever code or hack to address.
The user-generated nature of the technology means it will have to be adopted by vast numbers of boats to fulfil its full potential -- although a chunk of data the system relies on is already publicly available and used by other on-board computer systems. 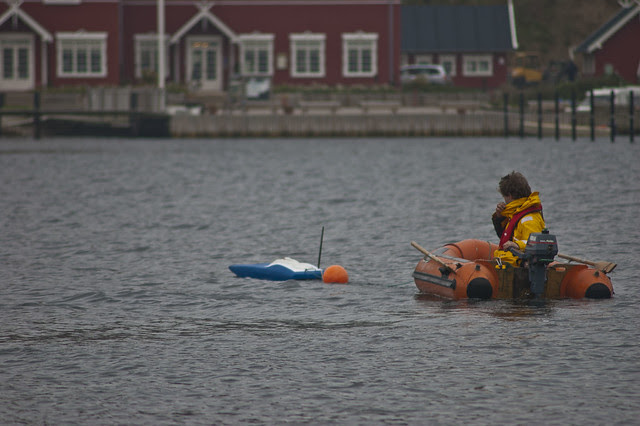 The MS 0x00 is our first autonomous ship.
Currently very limited in its engine power, it serves us as testing and benchmarking platform for hardware and software.
A member of Hackerfleet follows the MS0X00 as it makes its maiden voyage, ensuring no mishaps occur.

Ultimately though, Ijon maintains that commercial success is not a primary concern of the Hackerfleet.
The organization remains an operation run by friends with a mutual passion for the seas and technology.
As such, all software is currently given away for free and any code developed remains open-sourced.
"Essentially, it's less about earning money and more about getting the seafarer and his ship on the next technological level in the 21st century," Ijon said.
"We expect to be paid for our work at some point but we want to do this in the right way, the morally correct way," he explained.
"This (technology) could potentially give us the best information stock for crews and captains to decide on ... and for us that is what's most important for now."