﻿
This short documentary illustrates the descent of Jacques Piccard, the Swiss oceanographer who dove to the bottom of the Mariana...
From Wired

Fifty-one years ago this Sunday, Swiss engineer Jacques Piccard and Navy oceanographer Don Walsh descended to the bottom of the Mariana Trench, seven miles below the sea’s surface.

It’s the lowest point on Earth, and deeper than any human had gone before — or since. 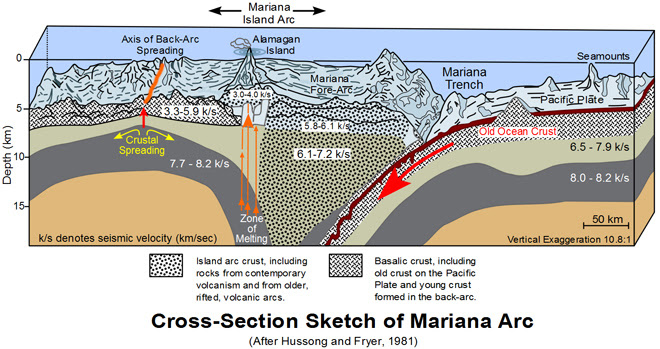 Diagram of the Mariana Trench and its subduction-powered formation.
/Wikipedia/Vanessa Ezekowitz
Above is a new video chronicling the explorers’ journey, weaving animation with audio from an interview granted by Piccard in 2005, three years before his death.
The interview was conducted by New York writer Victor Ozols, but went unpublished and eventually ended up on his blog.
There it was found by German design student Roman Wolter, who made the film.

“Piccard’s story has been told in encyclopedic format before, but never before like this,” wrote Ozols in an e-mail to Wired.com.

Piccard and Walsh performed their descent Jan. 23, 1960, inside the bathyscaphe Trieste — a closet-sized metal sphere joined to a giant gasoline-filled buoyancy tank, built with the assistance of Piccard’s father.
Since then, only two remotely operated robots have made the journey.