Autosub6000, a robot sub for charting nearly every inch of the ocean

As the world awaits Curiosity’s arrival on Mars, an alien landscape 227 million kilometres closer to home remains woefully unexplored.
To chart the vast depths of the ocean, the UK has developed an unmanned sub capable of diving miles beneath the sea.

It’s called the Autosub6000. This 5.5m, 2.7-tonne, titanium-clad Autonomous Underwater Vehicle is the latest in a long line of independent deep sea explorers developed by the National Oceanography Centre, Southampton.
As the name implies, the Autosub is pressure-rated to a staggering 6000 metres — deep enough to explore 90 per cent of the word’s oceans.

Rather than being tied to its mothership via a 6km umbilical for power and control, like conventional ROVs, the Autosub free-dives.
Its flight path is pre-programmed before the submersible is launched.
In the water, up to 12 rechargeable lithium-ion polymer battery packs on a five-hour charge provide enough juice for 60 hours or 350km of operation.
While this is a huge improvement over previous Autosub models that ran on regular D batteries — 5500 of them to be precise — the NOC hopes to double the operational capacity on future UAV models.


Launching and recovering Autosub6000, our underwater robot, on its missions exploring the depths of the Cayman Trough in search of deep-sea volcanic vents.

Since the Autosub works without human intervention, it employs GPS navigation when on the surface and an Ixsea PHINS fibre Optic Gyro (FOG) based Inertial Navigation System, coupled to a RD Instruments 300kHz Acoustic Doppler Current Profiler, which allows the sub to maintain a constant height above the seafloor as the terrain changes. 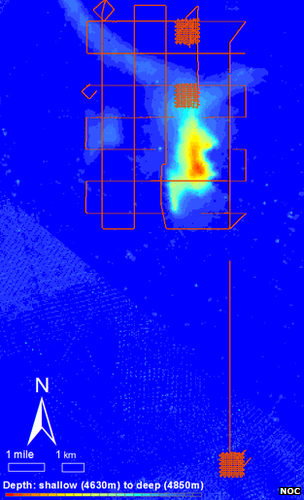 As a sensor suite loaded into the watercraft’s nose collects scientific data, it also uses forward-facing collision-avoidance sonar to avoid running into reefs, black smokers, cliffs and other obstacles. “Apart from the correct functioning of the vehicle during the trials at extreme depths, what particularly pleased me was that we have now developed the control and obstacle avoidance systems such that we have the confidence to send the AUV into a hostile and rugged terrain. This will lead to more challenging and interesting scientific campaigns in the future,” said Steve McPhail, Autosub6000 project leader.