What was life like for sailors during the Battle of the Atlantic? 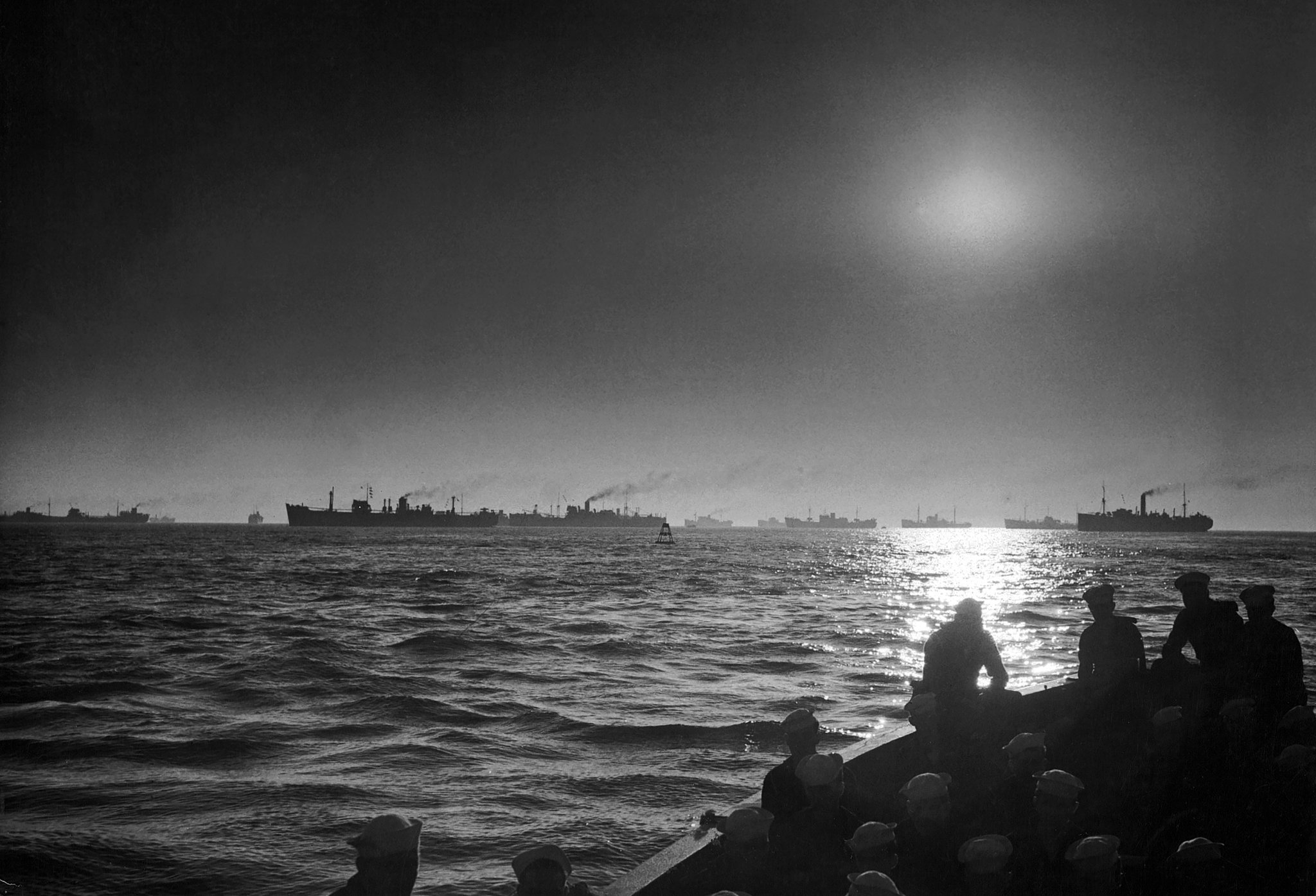 An Allied convoy crossing the Atlantic in 1942.
The Battle of the Atlantic was the longest naval campaign of the war, running from 1939 to 1945.
Credit U.S. Coast Guard

From NYTimes by James G. Stavridis

For those fighting the longest naval campaign of World War II, weather and German U-boats were constant threats.

In the latest article from “Beyond the World War II We Know,” a series by The Times that documents lesser-known stories from World War II, James Stavridis, a retired United States Navy admiral and former commander of the United States European Command looks back on the lives of sailors during the long Battle of the Atlantic.

In the winter of 1994, I was sailing off the coast of Norway in the guided-missile destroyer U.S.S. Barry — my first stint as a ship’s captain.
Even given the ship’s 8,000-ton size — vastly larger than the corvettes (small warships) and destroyers of World War II — we were pitching and rolling viciously in the harsh winter seas.
As I walked the unstable decks and talked to my sailors standing the long night watches, I told them about the Battle of the Atlantic.

These waters had been the scene of the most difficult and longest naval campaign of the war, with over 100,000 deaths from both sides and close to 5,000 vessels sunk in hundreds of combat encounters. Most of my sailors were in their early 20s, and barely remembered the recently concluded Cold War, let alone the ancient history of World War II.
Yet as a destroyer sailor, I knew that you could drop a plumb line from the thousands of North Atlantic voyages of 1939-1945 directly to my young team struggling to keep their dinner rations down in the churning waters half a century later.
While the conditions were challenging for us, they were far better than those faced by those brave crews.
So what was a day like for those hardy mariners of the turbulent and pivotal Atlantic battle?

First and foremost in every sailor’s mind was the looming presence of the sea and weather — in many cases their most dangerous foe.
Sailors would be shaken awake in the middle of the night for the long, dark midwatch, from midnight to 4 in the morning, tumbling out of canvas bunks jammed by the dozens in tiny sleeping compartments.
Every man in the ship would have an intuitive sense of the weather after rising, feeling the pitch and yaw of the ship in the harsh seas.
But most would check with the quartermaster — the ship’s on-duty navigator and meteorologist up on the bridge — to get a sense of whether the barometer was rising or falling, and what the next day or so would bring.
If they could snatch another hour of sleep after the midwatch, they would count themselves lucky indeed, as the exhausting quality of the ever-present seas hung over every task. 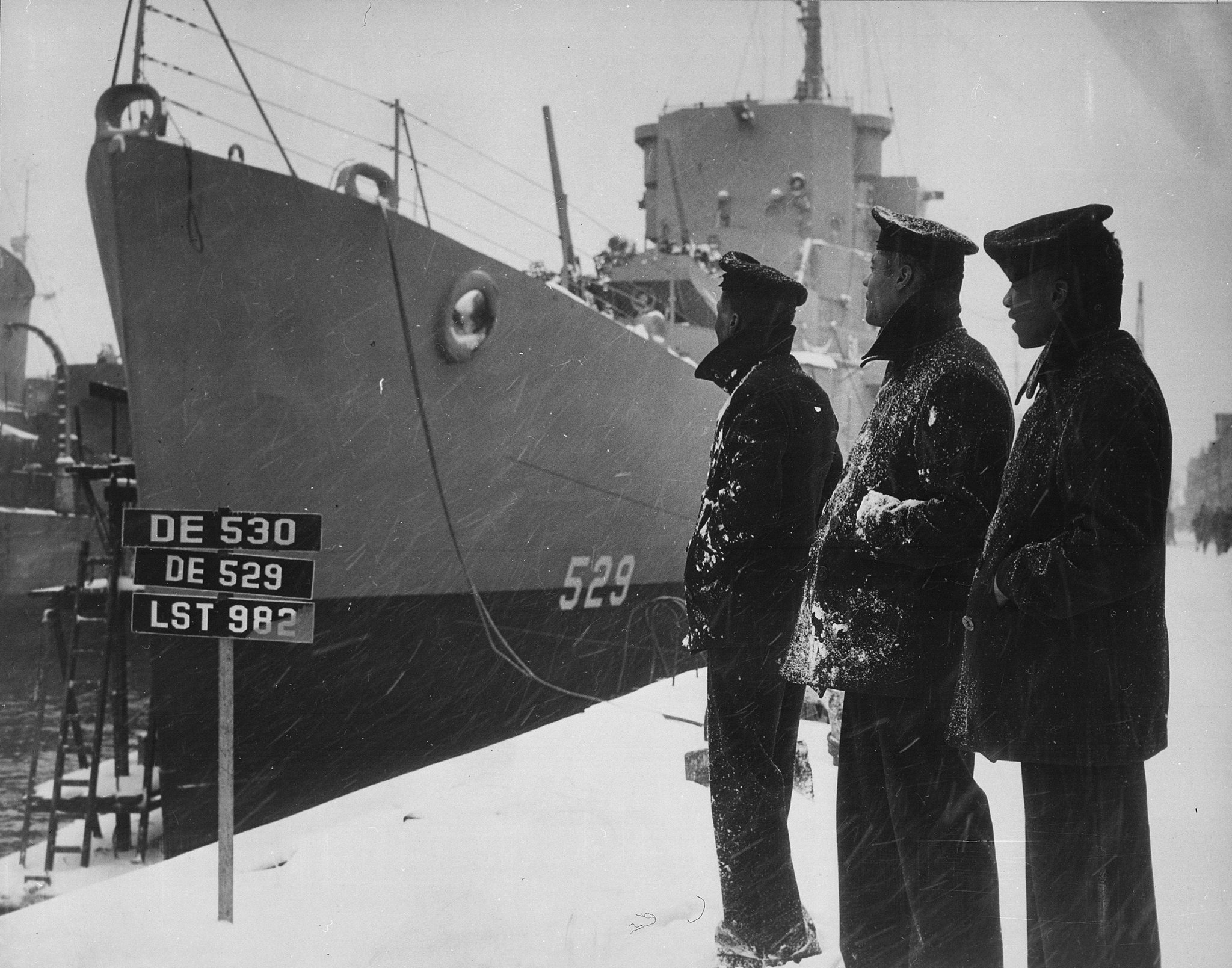 The U.S.S. Mason was commissioned at Boston Navy Yard before engaging in the Battle of the Atlantic in 1944.
It was the first American ship to have a predominantly black crew.
Credit...National Archives 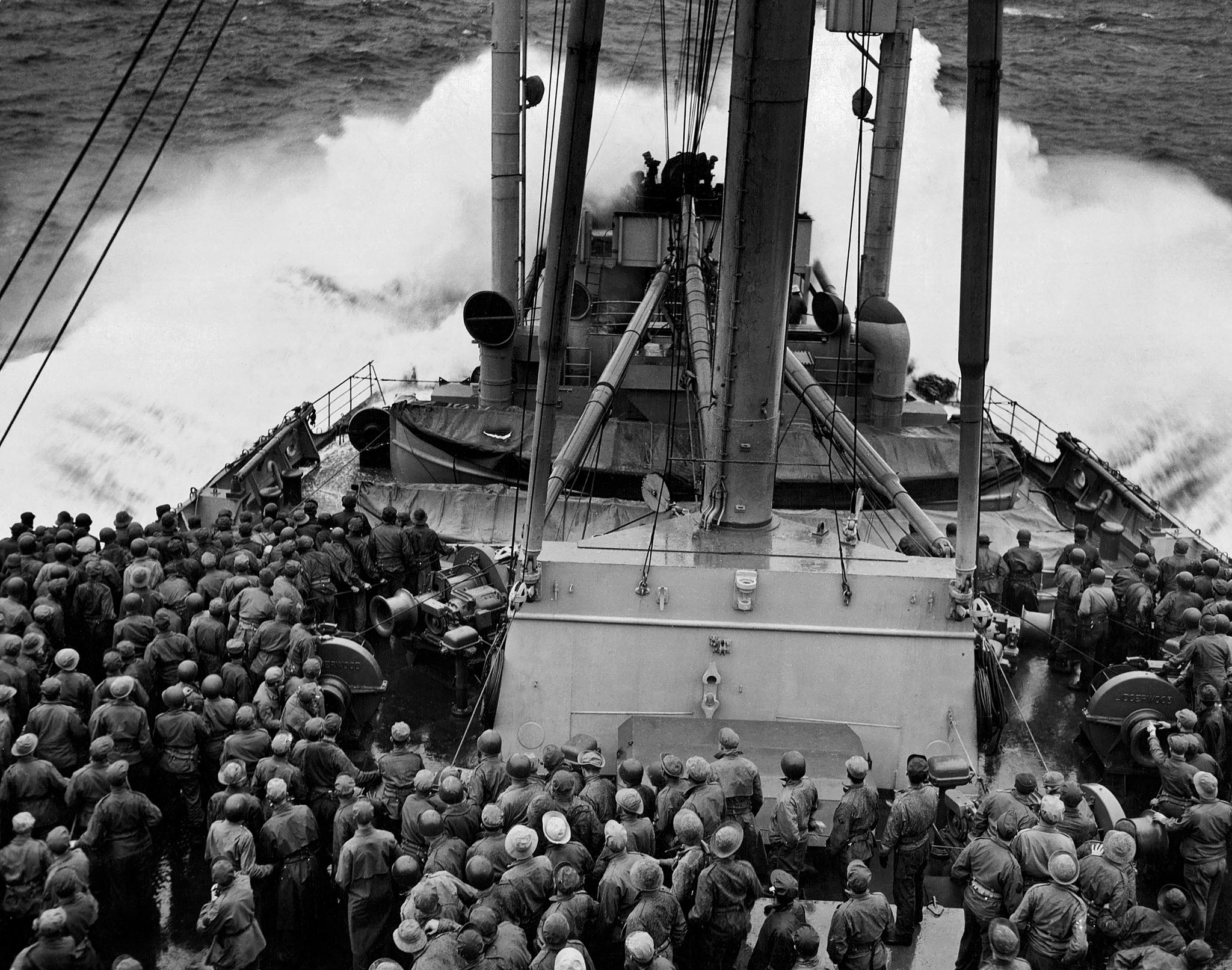 This Coast Guard ship faced rough conditions in the North Atlantic in 1944.
Weather was an ever-present challenge during the battle.
Credit...U.S. Coast Guard 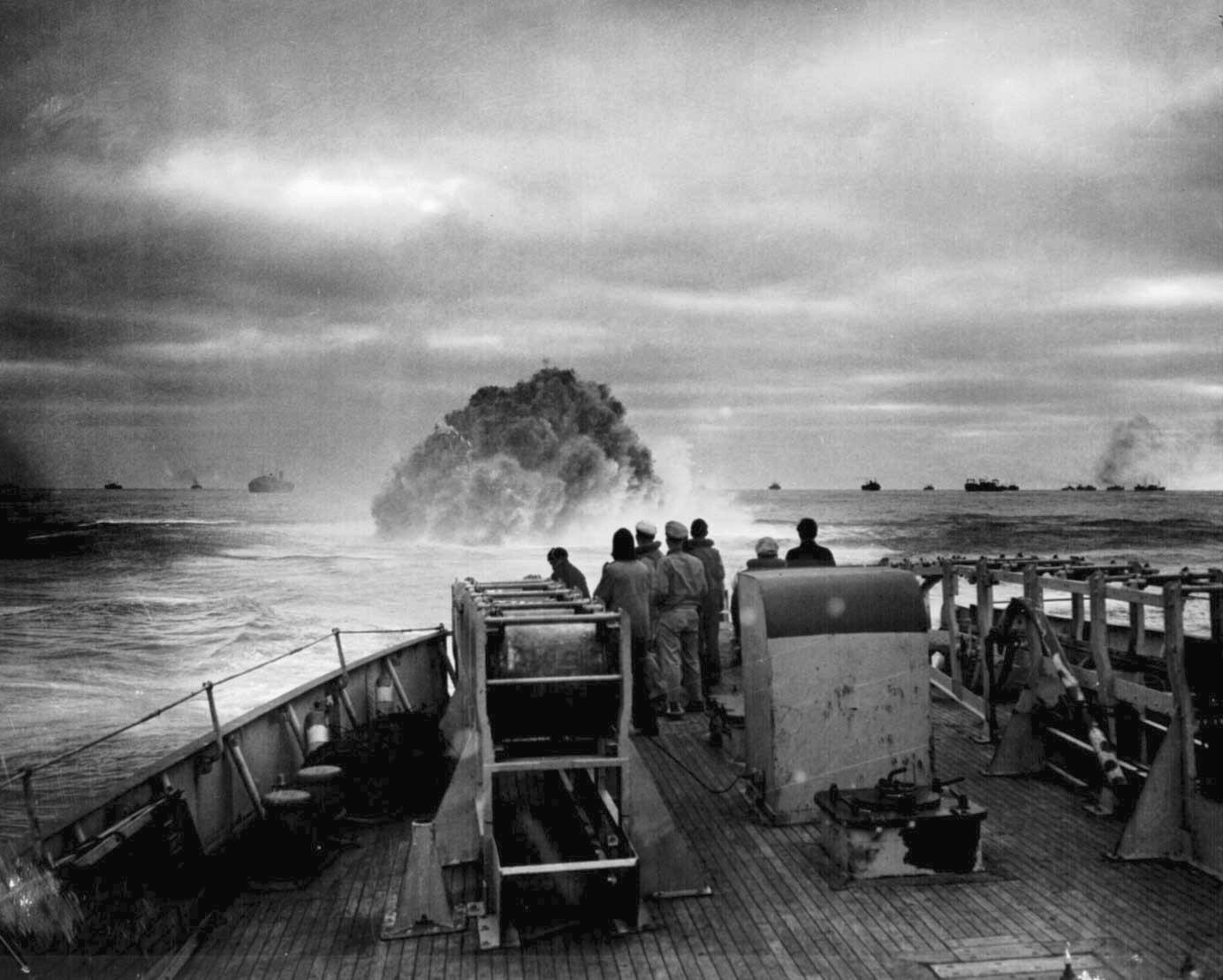 Coast Guardsmen watched the explosion of a depth charge that stopped a Nazi U-boat from breaking into the center of a large convoy in April 1943.
Credit...National Archives

The ship itself — in effect, almost a living being — posed another kind of daily challenge.

On the long convoy runs, the sailors would be working around the clock on its vital maintenance.
Down in the guts of the engineering plant, where temperatures could soar even on the coldest days, the “snipes” would be fueling and oiling the engines, flushing the bearings, sampling the freshwater generators and checking every aspect of the electrical generators.
Losing power at sea could be a death sentence for a ship, second only to a torpedo from a lurking U-boat, especially in deteriorating weather.

Up on the weather decks, the watch standers would be struggling to hold their footing while working on the topside gear as green seawater crashed over the slippery steel.
A failure to maintain any of the dozens of critical systems on the relatively primitive ships — propulsion, electricity, freshwater, weapons, even signal lamps — could prove fatal to those vessels, so the sailors worked endlessly and sleeplessly to be ready for instant combat.
Alongside the weather, the health of the ship itself dominated their long days and nights. 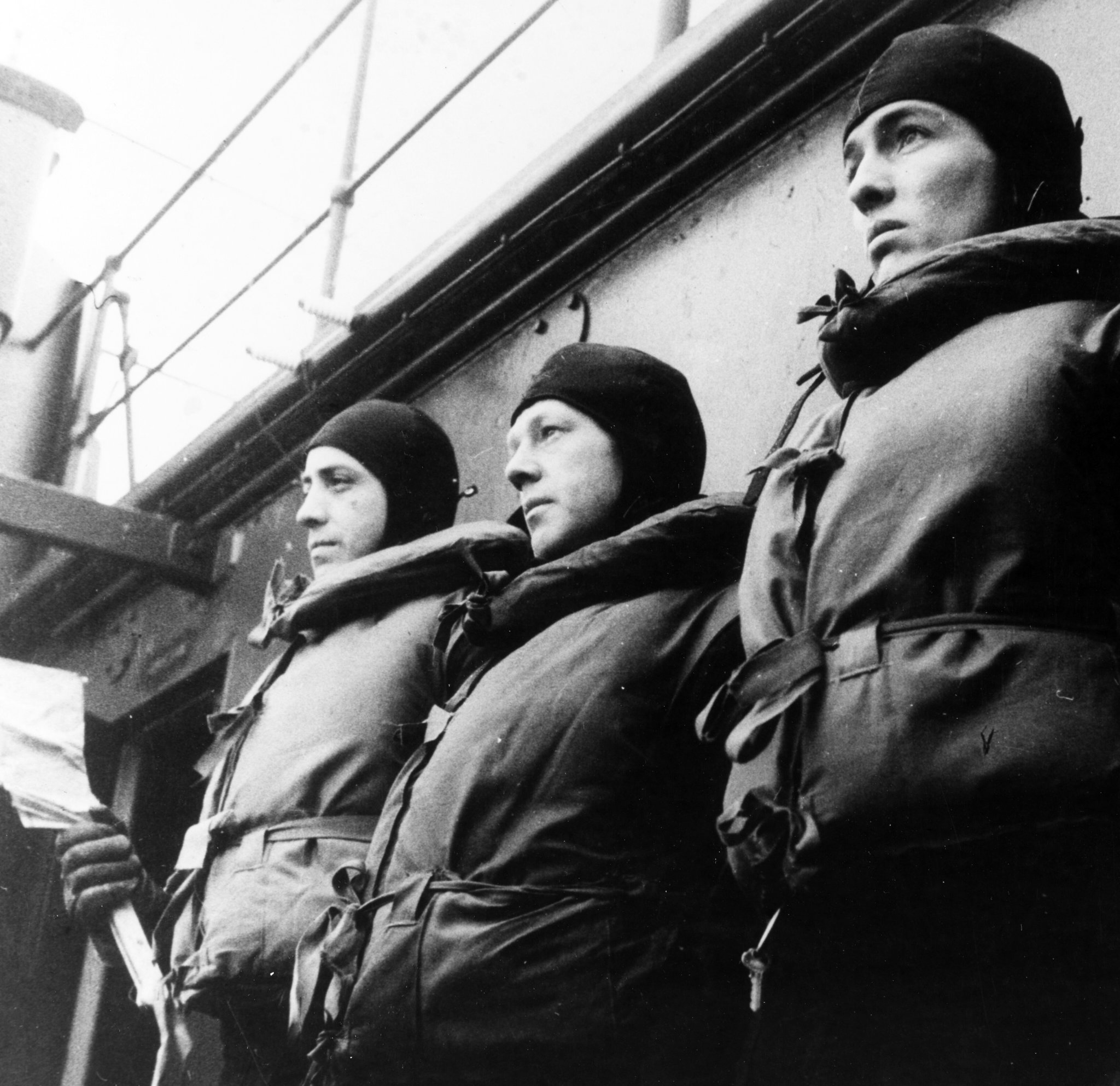 Three well-insulated seamen, part of a North Atlantic convoy en route to Iceland, in December 1941. The cleaver held by the sailor at left would have been used to cut away life rafts when abandoning ship.
Credit...U.S. Navy 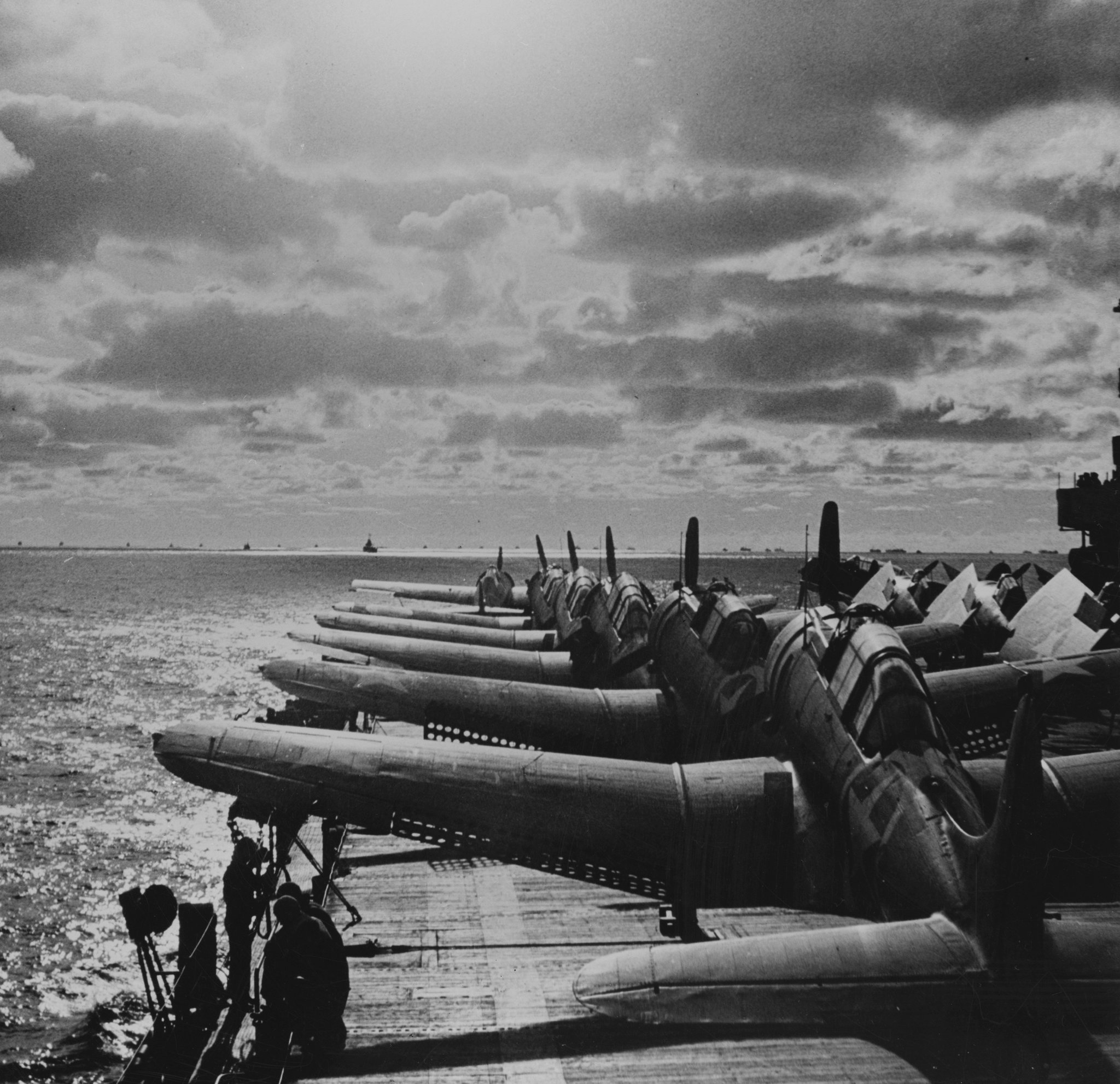 But the most feared eventuality of all was the sudden appearance of an enemy U-boat.
The ship’s days could be relatively routine for long stretches, but extreme vigilance was required while watching the distant horizon where the sky met the sea under the low, gray, scudding clouds.
That routine could change suddenly with a chance sighting of a periscope, a frantic radio or light signal from one of the merchant vessels under protection, or, worst of all, the hissing wake of a torpedo headed inbound.

At that moment, the ship would order “general quarters,” meaning all hands had to sprint to their individual battle stations.
Every weapons and sensor system in the ship would be manned, the damage control stations — essentially firefighting lockers throughout the ship — would be fully operational and the captain would be on the bridge.
That sudden call to battle would give every man a sinking feeling in the pit of his stomach, knowing that a prowling U-boat had penetrated the screen of defensive warships.
Primitive sonars would sonically pulse the water, depth charges would be dropped over the side and the cat-and-mouse warfare between destroyer and U-boat would be underway — though the outcome would remain uncertain. 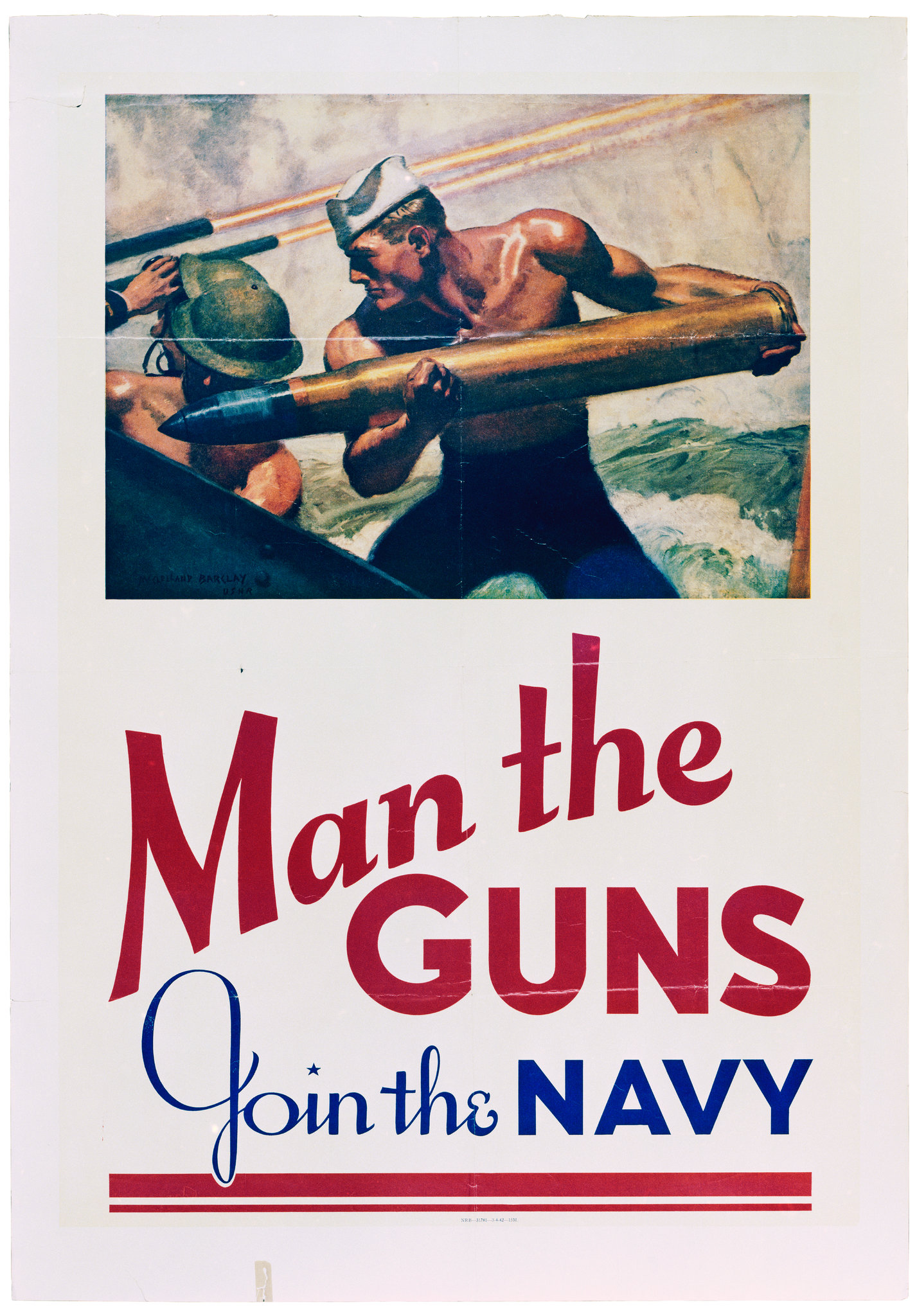 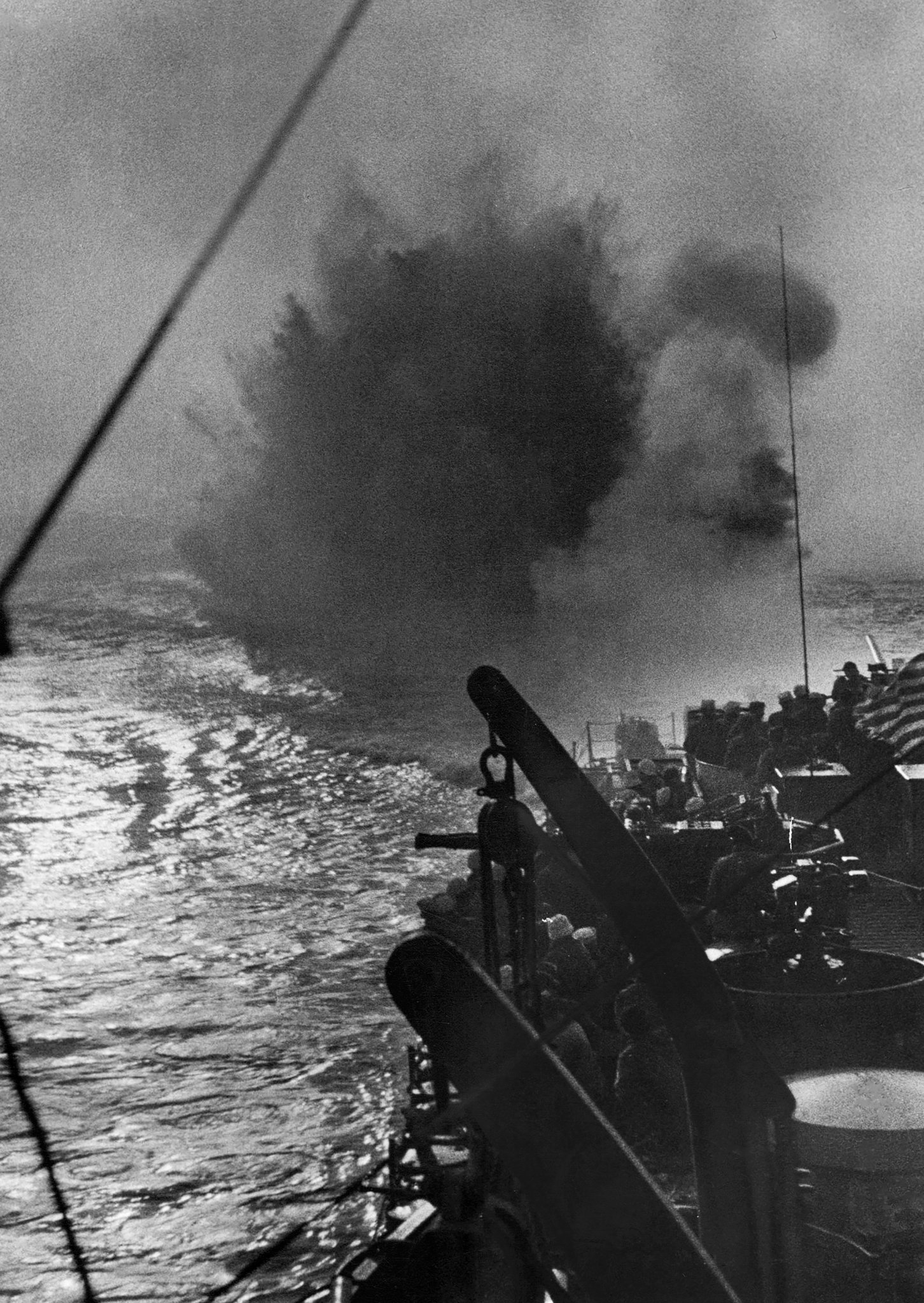 A depth charge exploded near a Coast Guard-manned frigate off Rhode Island, as the Battle of the Atlantic came to an end in May 1945.
Credit...U.S. Coast Guard 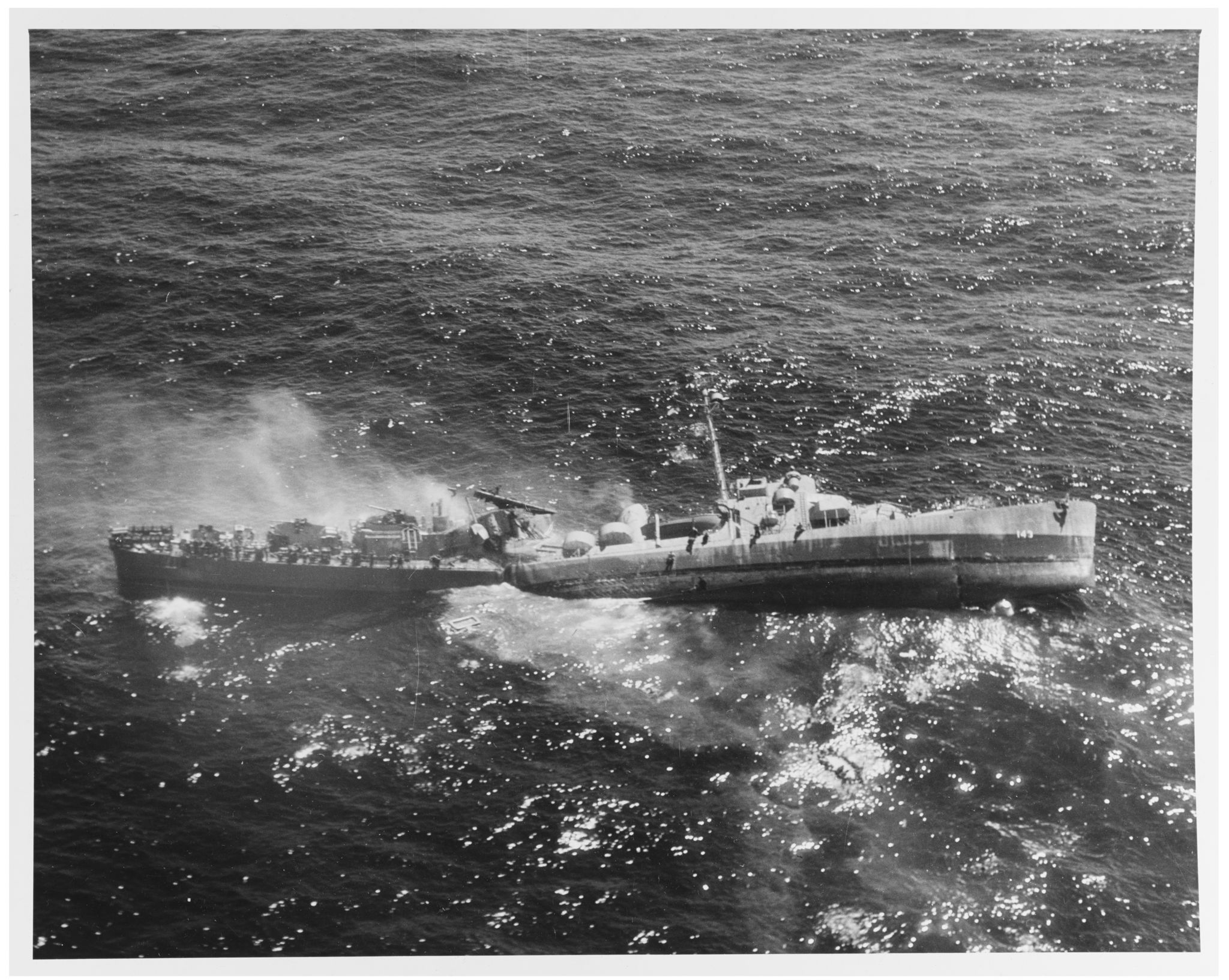 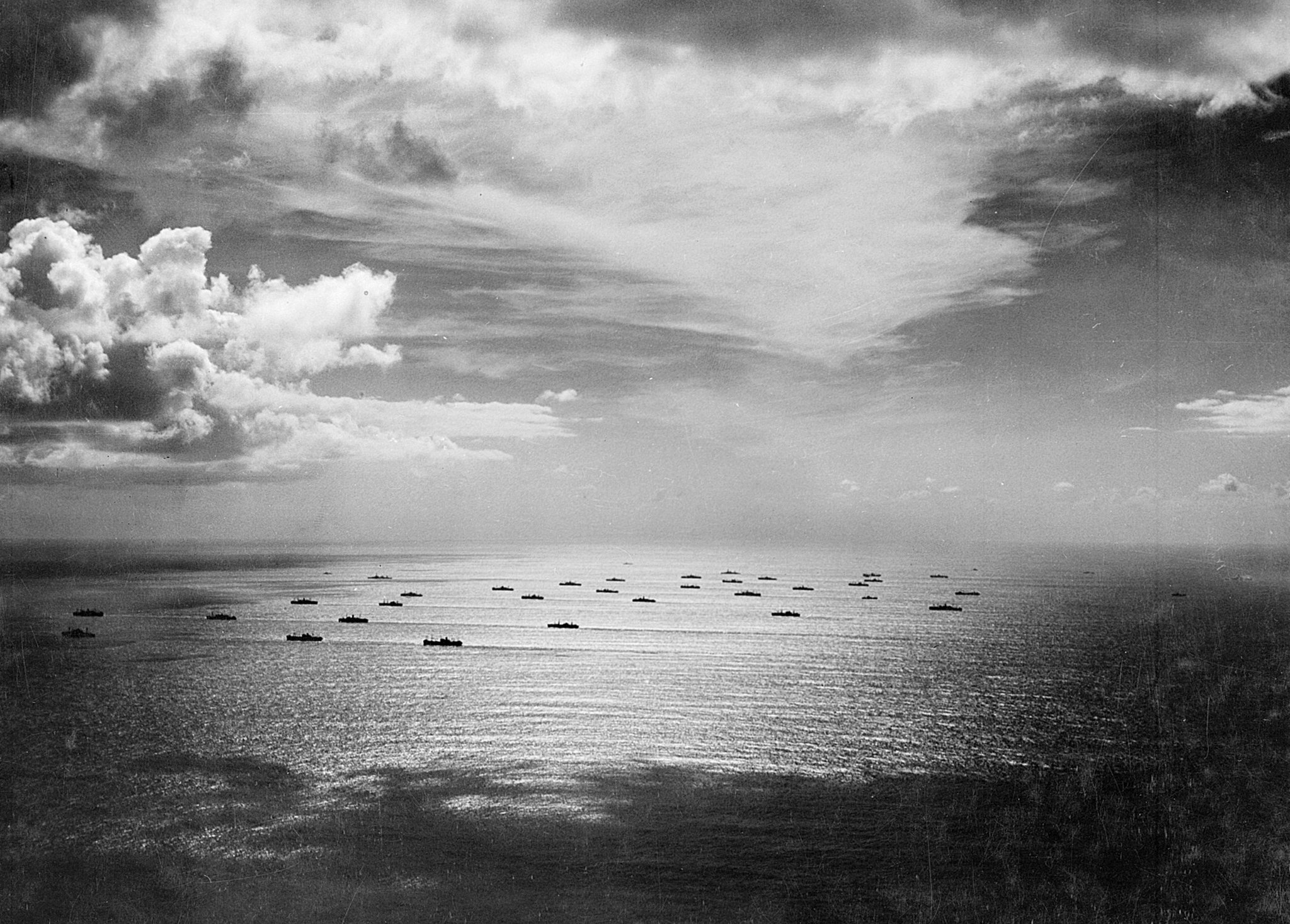 The Casablanca convoy moves eastward across the Atlantic, bound for Africa, circa 1942.
Credit...National Archives

What about the other side?
In many ways, for the German and Italian submariners, conditions were even worse.
Their boats were smellier with diesel fumes as well as smaller, their food was scarcer and the lack of at least a glimpse of the sea induced an ongoing, terrifying claustrophobia.
With far smaller crews, manning the ship was essentially a 24/7 job, with all hands always on deck. Allied weapons and sensors improved steadily, and the surface ships could use depth charges, explosive mortar rounds and even surface guns against the U-boats once the vital element of surprise was lost.
The possibility of plunging to the bottom of the sea while still alive, locked into what amounted to a steel coffin as the deepwater pressure crushed the hull, was the stuff of nightmares — yet for those U-boat crews it was all too often how they died.
Many hundreds of the boats were lost over the course of the campaign, with a staggering 75 percent casualty rate.

On both sides, it was the leadership of the captains that kept the crews on task, day after day and night after night.
A ship’s captain is deeply and personally responsible for every man and woman on the ship, and that level of command creates an unfathomable sense of pressure that hangs on your back like a heavy weight.
I felt that way for my crew, even in the relatively less dangerous years of the Cold War.
What those young captains felt during World War II would have been an acute sense of foreboding and danger hard to imagine today.

In his brilliant and tragic novel about the Battle of the Atlantic, “The Cruel Sea,” Nicholas Monsarrat talks about the qualities of the captain of a fictional British corvette called the Compass Rose.
“The captain carried them all.
For him, there was no fixed watch, no time set aside when he was free to relax and, if he could, to sleep,” he wrote. “He was strong, calm, uncomplaining and wonderfully dependable. That was the sort of captain to have.”

Not every real-life crew had a captain like that, but those who did were far more likely to succeed in the face of bone-grinding, exhausting and dangerous work — a task that in the end was the hinge upon which the great door of victory would finally swing.

The Battle of the Atlantic was, as the Duke of Wellington said about the desperately close Battle of Waterloo, a “nearest-run thing.”
By early May 1945, the battle saw its last actions, and the remaining U-boats were surrendered.
The sailors had earned the crucial victory they delivered, though only after a brutal toll was exacted, with about 3,500 Allied merchant ships sunk and 72,200 Allied deaths.
In the end, the battle was key to defeating Nazi Germany and assuring an Allied victory in Europe.