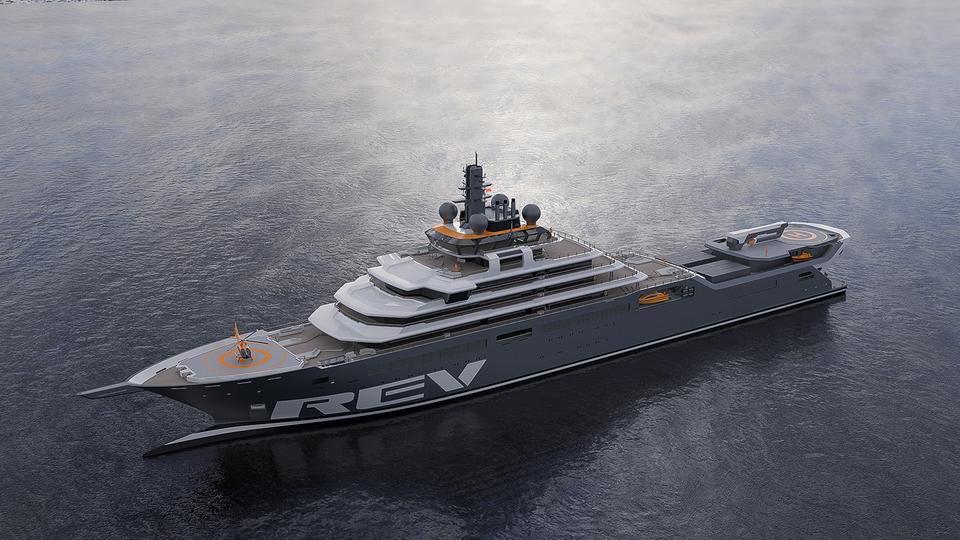 Twice as big as most research ships, the REV (seen in an artist's concept)
can operate in polar regions.
Eespen Øino Int.

"A dream vessel" is what Joana Xavier, a sponge expert at the University of Porto in Portugal, calls a new research ship due to launch in 2021.
Funded by a Norwegian billionaire, the 183-meter-long Research Expedition Vessel (REV) will be the largest such ship ever built, more than twice the length of most rivals.
Engineered to endure polar ice, punishing weather, and around-the-world voyages, the REV will not only be big and tough, but packed with top-of-the-line research gear—and luxurious accommodations.
Its full capabilities were detailed for the first time last week at a meeting on deep-sea exploration at The Royal Society in London.

The $350 million ship, under construction in a Black Sea shipyard in Romania, is owned by Kjell Inge Røkke, 60, who made his fortune in fishing, offshore oil, and other marine industries.
In October, he promised an additional $150 million to REV Ocean in Fornebu, Norway, to operate the ship for at least 3 years, giving scientists free access.
Røkke started the foundation last year to find solutions to climate change, ocean acidification, overfishing, and marine pollution.
"The scale of the investment and commitment is astounding," says Victor Zykov, science director of the Schmidt Ocean Institute, a charity in Palo Alto, California, that has its own research vessel, the Falkor

Many national research fleets are aging and shrinking.
Since 2005, for example, the U.S. academic fleet has declined from 27 vessels to 18, and by 2025 it will it drop to 16 ships.
As a result, marine scientists can face long waits for ship time.
"If I want to know what's happening in a particular place, it might not work out within a decade," says Antje Boetius, an oceanographer and director of the Alfred Wegener Institute in Bremerhaven, Germany.
Philanthropists have launched several vessels to help shorten the queue, but few are dedicated to research, and all are dwarfed by the REV.

It offers room for 60 researchers and large areas for science and engineering.
It will have trawls for capturing marine life and a remotely operated vehicle (ROV) for on-the-spot observations, a rare combination, and much else.
"The idea that all the assets are on the ship, and you can pick and choose, that is tremendous," says Ajit Subramaniam, a microbial oceanographer at the Lamont-Doherty Earth Observatory of Columbia University.
The ROV, capable of 6000-meter descents, can be launched through large side doors or a moon pool in the hull.
A pair of ship-borne helicopters can release smaller autonomous underwater vehicles (AUVs), which don't need tethers to the main vessel.
"Think of it as an aircraft carrier for robotics," says Chris German, a marine geochemist at Woods Hole Oceanographic Institution in Massachusetts.
The REV will also have a crewed submersible, probably one capable of descending 2000 meters. 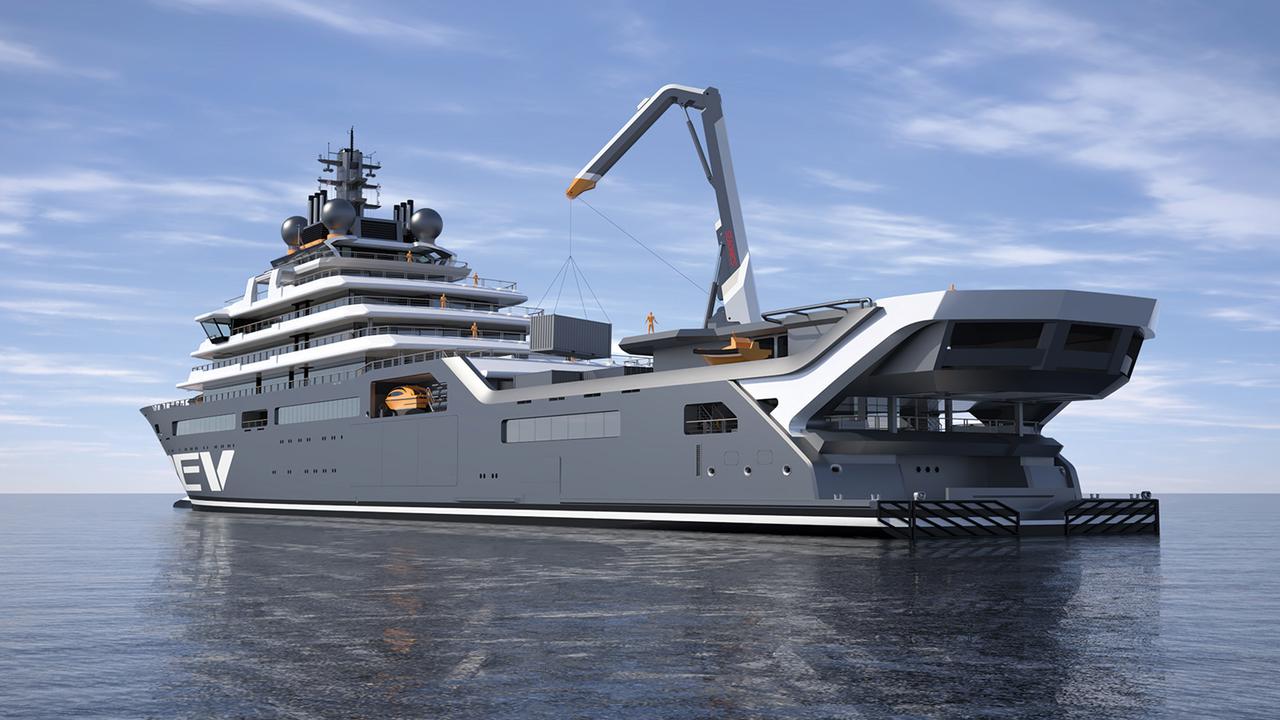 The main trawl, designed by Røkke's company Aker BioMarine for harvesting krill in the Southern Ocean, can remain 3000 meters deep while funneling fish to a tube that quickly pumps them up to the ship's wet labs.
This offers the tantalizing possibility of collecting jellyfish and other soft organisms that normally don't survive the slow trip to the surface when the trawl is winched up, opening a porthole into marine food webs.
"If the gear can sample with less damage, this would really help," says biological oceanographer Xabier Irigoien, science director of AZTI, a nonprofit institute for marine research in Pasaia, Spain.

The REV could also make a significant contribution to understanding fisheries on the high seas, Irigoien adds.
The intergovernmental organizations that regulate fishing beyond national jurisdictions don't own ships and can rarely afford to pay for time.
Free access to the REV could help scientists fill the gaps.
They might be able to track tagged tuna or sharks with AUVs, for instance, while sizing up schools of fish with the ship's high-tech sonar.
By combining data from the trawl and sonar, Irigoien says, researchers could chart potential fisheries in the deep sea before they're exploited.
The same technologies would be useful for investigating far-flung marine protected areas. 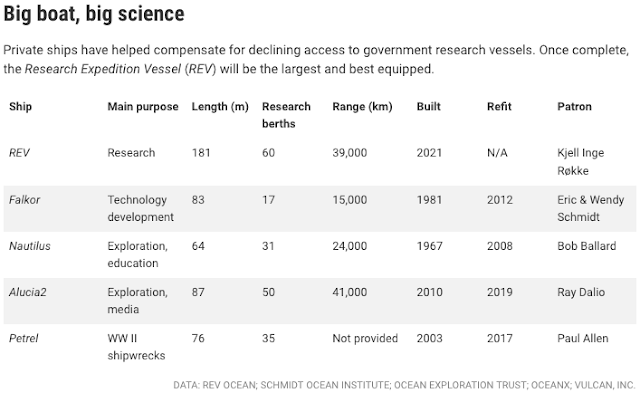 Most research vessels are spartan, but on the REV scientists will have nearly full run of the ship, including its lounges, gym, dining room, and seven-story atrium.
Magne Furuholmen, an artist and former keyboardist of 1980s pop group A-ha, is choosing the art collection.
The REV is also eco-friendly: It's fuel efficient with low emissions and a broad, stable hull designed to reduce noise pollution.
If it encounters a garbage patch, booms can collect up to 5 tons a day of plastic to incinerate onboard for energy.

Alex Rogers, an oceanographer at the University of Oxford in the United Kingdom, starts next month as the full-time science director for REV Ocean.
He says scheduling an expedition on the REV could be quicker and more flexible than on government research vessels, which are sometimes limited by range, budget, or scientific focus.
On the other hand, working with philanthropists is not like dealing with a research funding agency.
"You have to explain what you're doing," Rogers says.
"Be prepared to communicate with them."

Røkke's history could raise concerns about hidden agendas.
"I think there will always be some level of suspicion from the public that a person like Røkke—who made a fortune in ocean industries—that somehow there are strings attached," Rogers admits.
So he is working with the Research Council of Norway to design an independent review process that will select projects for ship time.
Rogers says the only expectation is that researchers focus on solutions and share their data after they publish.
"If Alex is involved, I have faith," says Kerry Howell, a deep-sea ecologist at the University of Plymouth in the United Kingdom.
"He's not the kind of person who would work for the dark side."

As for Røkke, he has no plans to run the foundation and is "very meticulous about this being fully independent and objective," says Nina Jensen, CEO of REV Ocean.
"He is serious about making a difference for the oceans." Jensen, who studied marine biology and previously led the environmental advocacy group WWF Norway , says she told Røkke she will resign if one of his companies, Aker BP, drills for oil in Norway's Lofoten islands, which boast rich fisheries and the largest known deep-water coral reefs.

To help cover the costs of operation, for 4 months a year the REV will open 60% of its berths on research expeditions to paying eco-tourists.
For another 4 months, the entire ship will be available as a luxury yacht.
Jensen hopes benefactors will charter it as a "floating think tank" to win more support for ocean protection.
Any extra funds raised will go to support early-career scientists.

It's an unproven model, Jensen concedes, but the REV won't sink or float on its fundraising prowess.
Røkke's pledge last month to support operations was only his first, Jensen says.
"It will not be the last."