The grounding and sinking of MV 'Minna' 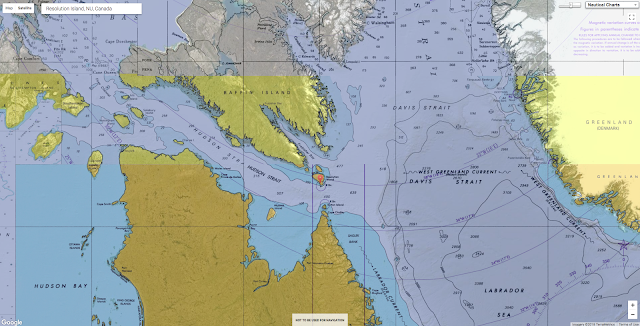 From Hydro by David H. Gray

The high cost of exploration in subarctic, often uncharted, waters was demonstrated in an unorthodox but convincing way by the 1974 grounding and sinking of the MV Minna off Resolution Island [Canada] while conducting a combined hydrographic-geophysical survey in the northern Labrador Sea.

Minna aground at the left of photo, and the large panel radar arrays on the mountain top — in Resolution Island (Nunavut).
photo : John Newton

Minna was an 83.6m long (274ft), ice-strengthened freighter built in 1960 at Arendel, Norway, as MV Varla Dan and subsequently sold to the Karlsen Shipping Company of Halifax who changed her name.
Bedford Institute of Oceanography (BIO) in Dartmouth, Nova Scotia, Canada, chartered her in 1972, 1973, and 1974 for deep-sea hydrographic and geophysical surveys in the Labrador Sea.
Given that she was only carrying survey equipment, 300 tons of concrete ballast, and was light on fuel, her displacement at the time of the grounding would have been about 3000 tons.

Austron 5000 LORAN-C receiver (with visor over the oscilloscope), PDP-8 computer, and paper tape reader.
In the right-hand rack, third and fourth pieces from the top

Navigation for hydrographic and geophysical surveys on the Minna was obtained from:
The geophysical survey equipment included a magnetometer, three marine gravity meters, and one land gravity meter.
Two sizes of air guns and a 100-foot (30m) towed streamer with acoustic microphones connected to receivers were used for collecting seismic reflection data.

Most of this equipment was in a purpose-built unit designed and built at Bedford Institute and lowered into #2 Hold, which became the ‘survey office’.

The Minna visited Godthåb (now Nuuk), Greenland, for engine repairs and to verify the marine gravimeters against land-based gravity readings.
Departing Godthåb on 16 August, she ran a line of soundings towards Saglek, Labrador, then, at 08:00 on 18 August 1974, she entered Brewer Bay near the Northeast corner of Resolution Island to pick up electronic technicians who had installed a DECCA Slave transmitter on the island and then to establish the lane count.
The wind was from the Southeast to South-Southeast at Force 4 creating a swell of 1.3m.
The Bay

The navigable portion of Brewer Bay is about 240 metres wide by 600 metres with a maximum depth of 22 fathoms (40m).
The bay is surrounded by high hills providing little shelter and it experiences heavy ground swell and a circular tidal stream when near high water.
A landing beach is located in a cove on the south shore of the bay where supplies are landed annually and temporarily stored for the radar station on Cape Warwick just north of the bay.

Because Minna had a single propeller and no bow thruster, her normal turning radius was large.
The ship was riding high due to low fuel and light load and was adversely affected by the SE wind causing her to have an even larger turning radius.
Accordingly, she went outside of the surveyed area while turning.
Because of forward motion and being blown sideways, she grounded on a rock pinnacle at 09:34.
At the time of grounding, the tide was dropping but still 3.1m above datum.
A sounding by lead line on the ship’s starboard (seaward) side, just aft of where the pinnacle pierced the ship’s outer hull, found no bottom; however, the ship’s sounder showed a depth of 25 fathoms.

Having assessed the situation, the captain ordered full astern at 11:00 (height of tide now 1.8m above datum), but the stern of the ship merely turned to port, thus coming closer to being parallel to the cliff, and failed to come off the pinnacle.
To return the ship to the original heading, the captain ordered full port rudder and went forward, driving the ship farther onto the rock.
By 13:00, CCGS Griffon, a buoy tender & light icebreaker, was proceeding to Brewer Bay to provide assistance.
At 19:30 (height of tide 5.5m above datum) and again at 20:20 (height of tide now 4.8m) the Griffon tried to pull while the Minna applied full reverse, but at both times the lines parted.
On the second attempt, the broken end of the hawser fouled Minna’s propeller, thereby reducing later attempts by the Griffon acting alone.
The Griffon tried a third time at 21:15.
Only at 21:30, did the crew begin lifting some of the concrete blocks from #1 Hold.
Around 23:00, it was reported in the deck log that #2 Hold was dry but #1 Hold was flooded – an indication that the ship was becoming more damaged.

The removal of cement blocks ceased at 06:00 on 19 August owing to water rising in #1 Hold, so the hatch was covered and the booms lowered.
Three more times Griffon attempted to pull Minna off the rocks; all attempts failed.
The heavy sea and swell and the wind from the Southeast (i.e., directly from the open ocean) caused the ship to keep striking heavily on the rocks.
At 13:00, they attempted to take the hatch-cover off #2 Hold to hoist the survey equipment from the Hold, but the hinges gave out, negating that course of action – another indication that the ship was breaking apart.
The crew and the BIO staff were transferred to shore and were not particularly welcome guests at the radar site, at least until some of the ship’s provisions (especially the duty-free alcohol) were brought up from the landing beach.
Between 18 and 20 August, the BIO staff returned to the ship during periods of high tide and man-handled all the moveable equipment through the ship, up the gangways, onto the deck, and then lowered it down into the BIO barge for transfer to shore.
Nine personnel were flown to Frobisher Bay (now Iqaluit) by chartered aircraft on 20 August and to Halifax by commercial airlines the next day. CCGS Norman McLeod Rogers (buoy tender/light icebreaker) arrived to take nine of the ship’s personnel to Frobisher Bay on 21 August to get flights to Halifax.

The Retrieval of the Equipment

The scientific equipment, which had been removed from the ship, was stored in a shed near the beach. Fortunately a squadron from the Royal Canadian Navy was exiting Hudson Strait and was called upon for assistance.
HMCS Assiniboine and Saguenay [destroyers] arrived on 22 August and HMCS Preserver [supply ship] on 23 August, but the squadron commander was not going to risk his ships going into such a small bay.
Nevertheless, the Navy retrieved the off-loaded equipment by sea-boat or Sikorsky Sea King helicopters to the Preserver and ultimately returned it to Bedford Institute.
Three of the survey staff went to Newfoundland on the naval ships.
The chief scientist and nine others stayed to dismantle the DECCA Slave station and on 26 August flew to Halifax via Frobisher Bay.
On 19 September 1974, CSS Baffin [hydrographic ship] retrieved the DECCA equipment from the shore and more of the equipment from the Minna.

The End
A Norwegian ocean-going tug arrived before 5 September, but waited until the next Spring High Tide on 15 September but the tug was not successful in freeing her.
On September 19, the Karlsen Shipping Company and its insurers declared the ship abandoned as no salvage company was interested in rescuing her.

The yearly sealift of goods to the Northern Warning System station on Cape Warwick reported in June 1998 that the wreck of the Minna had slipped into deeper water because of ice action.
A Notice to Mariners was immediately issued instructing mariners to add a dangerous wreck symbol to the 1963 Edition of CHS chart 5430 and on its inset of Brewer Bay, at 61° 34′ 56.0ʺN, 64° 38′ 23.0ʺW (local datum).
Also, a multibeam hydrographic survey with full bottom coverage positioned by GPS was carried out late that summer.
The 2005 New Edition of the chart incorporates the 1998 survey both on the main chart (for the approaches to Brewer Bay) and for the entire inset of Brewer Bay.
The main chart shows the more normal wreck symbol whereas the inset uses the wreck symbol appropriate for large-scale charts near the north shore of the bay at 61° 35′ 17.5ʺN, 64° 37′ 53.5ʺW (NAD-83) with the bow facing northwest and drying (i.e., visible) at low tide.
The present Sailing Directions, published 2009, cautions mariners that “ice action has shifted the wreck; the exact position and depth over [the wreck] are not known.”

The 1963 Edition of Chart 5340 was based on a 1952-3 US Navy survey, where its geographic grid was based on an astronomically determined survey point.
The topography on the chart was from aerial photography taken about the same time.
A New Edition of the chart was required to incorporate the 1998 CHS survey and so the chart was converted to NAD-83 so that it would be compatible with GPS positioning.
The shift in the geographic grid accounts for most of the 795 metres between the two positions quoted above.
The magnitude of this shift is typical for charts that are based on exploratory quality astronomic positions.

Air photos taken in 1976 show the Minna lying on her starboard side, bow to the southwest and stern to the northeast.
In the 1987 air photos, the ship is not visible above water, but the water tones suggest that the ship is submerged at its 1976 position, although the orientation may be reversed.
In the 1993 air photos, the ship is not visible, although there may be something in the water at the 1976 position.
Google Earth, which uses a July 2006 satellite imagery, shows shallow water at the wreck’s charted location.
These series of photographs pose two questions.
Perhaps the apparent movement in the air photos and the situation as found in the 1998 survey, are the reasons for the Sailing Directions’ caution note and the continuance of the ‘Position Approximate’ on the inset of the chart.

Given modern capabilities of 100% bottom coverage and remotely controlled underwater vehicles, it would be interesting to evaluate the damage done by sea-ice on the hull of the Minna after 40-plus years.

Posted by geogarage at 3:20 PM