Modeled phytoplankton types on cubed sphere
The data is from a simulation of the Darwin model in a physical run of the MITgcm by the ECCO2 group.
The model has 78 types of phytoplankton, nutrients, zooplankton and disolved and particulate organic matter.
(other video)

From Phys.org by Mark Dwortzan

When she was 17, Stephanie Dutkiewicz set sail from her native South Africa to the Caribbean islands.
Throughout a three-month journey, she noticed that the color of the ocean shifted from place to place, but it wasn't until she took up oceanography in college that she came to understand why.
Early on in her studies, she learned that ocean color varies from green to blue, depending on the type and concentration of phytoplankton (algae) in the area.
As they use chlorophyll, a green pigment, to generate organic carbon through photosynthesis, these "plants of the sea" reflect light; the more phytoplankton in the ocean, the less blue and more green the color of the water. 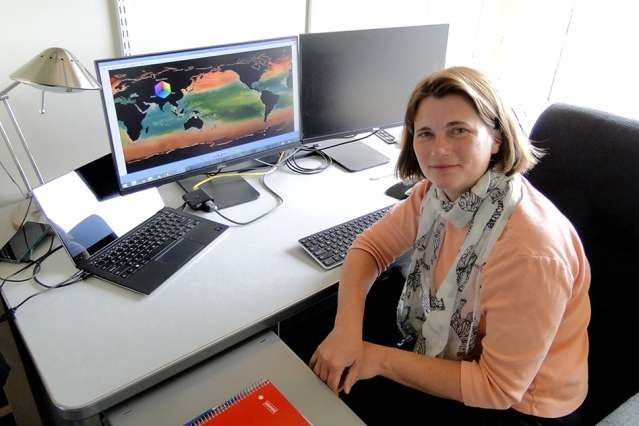 Stephanie Dutkiewicz in her office with a display of her phytoplankton model simulation.
Credit: MIT Joint Program on the Science and Policy of Global Change

Now a principal research scientist in MIT's Joint Program on the Science and Policy of Global Change and Department of Earth, Atmospheric and Planetary Sciences (EAPS), Dutkiewicz remains focused on these drivers of ocean color.
For more than a decade, she and her main research partner, EAPS Associate Professor Mick Follows, have been leading a team of a dozen MIT researchers and several collaborators from universities around the world to advance the Darwin Project, which aims to model the growth, loss, and movement of phytoplankton around the world, the environments that they inhabit, and how they affect one another.
Dutkiewicz is systematically probing phytoplankton behavior to home in on what traits distinguish one of thousands of phytoplankton species from another, which types will survive and thrive under different environmental conditions, and where different types are likely to live.
Guided by laboratory, ship, and satellite observations, she has represented as many as 100 different types of phytoplankton—other groups typically model no more than five—in complex computer models that simulate phytoplankton population dynamics in the ocean and project how those dynamics will change in coming decades.
Producing results that square with actual observations, these models, which comprise hundreds of thousands of lines of code, are generating the world's most complex 2-D and 3-D global maps of phytoplankton activity and ocean color.
Visually arresting, the maps suggest profound implications for the future of the planet, from the sustainability of the ocean's food web to the pace of global warming.
"Since they are at the base of the food web, understanding which types of phytoplankton live where and projecting how these populations are likely to change will help us understand what will happen further up the food chain," Dutkiewicz explains.
"And because the process by which these phytoplankton take carbon and sink it down into the deep ocean is responsible for storing about 200 parts per million (ppm) of carbon dioxide, they play an important role in the Earth's climate system."

In an ongoing phytoplankton modeling study funded by the National Science Foundation, Dutkiewicz and Follows are investigating several distinguishing traits and their potential impact on the planet.
Traits they've identified include those based on behavior, such as rates of nutrient uptake, temperature tolerance and light tolerance, and those based on size.
In the phytoplankton world, size matters.
While all are microscopic, individual phytoplankton range in diameter from under 1 micrometer to more than 1,000 micrometers—akin to the size difference between a mouse and Manhattan.
As the ocean warms, its upper layers are expected to interact less with lower layers where nutrients are concentrated.
As a result, smaller phytoplankton, which are best equipped to tolerate compromised nutrient conditions, will likely outnumber larger phytoplankton, which are more effective at storing carbon. Such changes may not only shift the oceanic food web to one based on smaller phytoplankton but also reduce the ocean's effectiveness as a carbon sink. 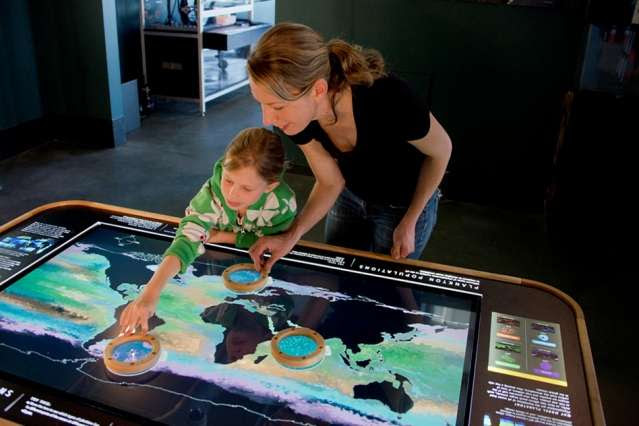 Most phytoplankton models, including those used by the Intergovernmental Panel on Climate Change (IPCC), usually resolve just two phytoplankton types: small and large.
So when the ocean warms to a certain point in the coming decades, the modelled phytoplankton populations appear to shift dramatically, with small ones far outnumbering large ones. In reality, however, these shifts are expected to occur gradually.
"Because we include a more diverse size distribution in our model, we find that as we run out the 21st century, phytoplankton sizes don't quickly shift from big to small, but rather from big to slightly smaller," says Dutkiewicz.
"So the impact might not be as large as the IPCC models predict."
To assess the impact of phytoplankton size and function on the climate, Dutkiewicz and her collaborators represent the global ocean as a set of location-based grid cells, each sized at a resolution that's fine enough to validate the model through satellite and ship observations.
Within each grid cell, the model solves a set of equations that account for phytoplankton growth, movement, loss, carbon cycling and other population dynamics.
Comparison of modeled and SeaWiFs Chl


With funding from NASA, Dutkiewicz is also using the computer model to "ground-truth" satellite observations of phytoplankton concentrations in different parts of the ocean, which are based on how much light is emitted from the ocean surface.
The light is reflected by chlorophyll in phytoplankton, which absorb more blue than green light.
By measuring how much blue versus green light is emitted, the satellites estimate how much chlorophyll is present at a given location.
Such estimates are crude at best, so Dutkiewicz is working to assess the level of uncertainty in chlorophyll ocean maps by representing reflected light in her phytoplankton models.
Her models produce true colors of the ocean today, and project ocean colors throughout the 21st century based on changes in phytoplankton population dynamics.


For example, as the ocean warms and becomes more acidic, phytoplankton populations will change, thus altering chlorophyll levels and impacting how much light is reflected from the ocean surface.
"Tracking this could help us identify a real, climate-change-driven signal that stands out from the year-to-year, natural variability in phytoplankton populations across the globe," she says.

Dutkiewicz' career path as an oceanographer has uniquely positioned her to pinpoint such signals.
As a PhD student in physical oceanography at the University of Rhode Island, she originally focused on capturing the movement of ocean currents.
When she came to MIT in 1998 as a postdoc in EAPS, she studied how physics alters the biology of phytoplankton (e.g. how ocean currents move their biological cargo), and built a numerical model of the marine ecosystem based on one type of phytoplankton.
Now modeling up to 100 times as many types, she is perhaps the most qualified person in the world to explain not only why the colors of the ocean vary from place to place, but also what those colors might portend for the future of the planet.