The venomous thorn-like spines that protect this starfish are the least of our problems - this species is destroying coral reefs in many parts of the world due to an imbalance in the oceans
source : Khaled bin Sultan Living Oceans Foundation

From CNET by Michelle Starr

The Queensland University of Technology is developing an autonomous robot to deal with the one of the biggest threats to the Great Barrier Reef: Crown-of-Thorns Starfish.

The Great Barrier Reef, off the coast of Queensland, Australia, is dying.
However, while a great deal of the damage to the 344,400 square kilometres (133,000 square miles) of coral comes from climate change and pollution, one of the biggest threats comes from within: the Crown-of-Thorns Starfish, Acanthaster planci, which feeds on native coral.

This animation shows the locations of Crown of Thorns Starfish (COTS) outbreaks
as measured over the last 30 years.
source : Dr Eric Lawrey, AIMS

In normal conditions, the venomous starfish feeds on faster-growing corals, which allows colonies of slower-growing corals to form, improving the diversity of a reef.
This is what occurs in other regions of the Indo-Pacific to which it is native.
But at the Great Barrier Reef, the starfish is a menace.
Every few years, the starfish's population explodes, leading to over a decade of havoc.
Three of these population explosions have been recorded over the last 50 years: 1962-1976; 1978-1990; and 1993-2005; and a new population observed in 2011 is believed to have been the vanguard of a new outbreak.
If not for these outbreaks, research from the Australian Institute of Marine Science predicts, coral cover would have increased in the last 30 years. Instead, it has declined by about 50 percent.

Crown-of-Thorns Starfish off the coast of Indonesia.

What causes the Crown-of-Thorns Starfish population explosions is currently unknown, although it is believed that overfishing of the starfish's natural predators exacerbate them, and that destruction of predator habitat has led to declining predator numbers.
These are not easy to deal with.
Instead, a project from the Queensland University of Technology takes the direct approach.
Called the COTSbot (Crown-of-Thorns Starfish robot), it's designed to autonomously patrol and monitor the reefs without a tether, using robotic vision to find the starfish.
When it locates a Crown-of-Thorns starfish, it will administer a lethal injection of bile salts from a pneumatic arm.
This is not a pleasant death for the starfish.
It breaks out in blisters that burst open, exposing the internal organs.
This condition is infectious and can be passed to other Crown-of-Thorns starfish.
Infected starfish die within 24 hours, with a 100 percent mortality rate.
The robot, which has been in development for 10 years, completed its first sea trials in Queensland's Moreton Bay last week, testing its mechanical parts and navigation. 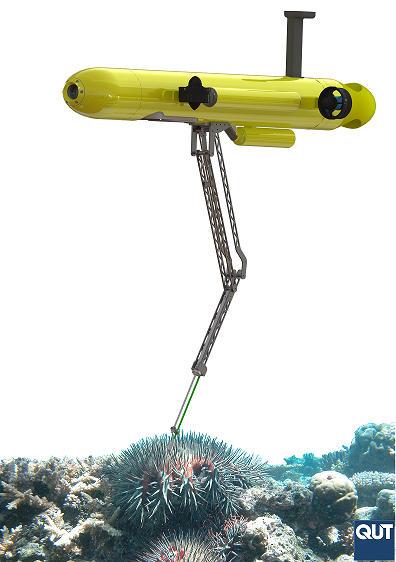 Starfish have 20 seconds to comply.
This seek-and-destroy robot defends the Great Barrier Reef

"Human divers are doing an incredible job of eradicating this starfish from targeted sites but there just aren't enough divers to cover all the COTS hotspots across the Great Barrier Reef," said Matthew Dunbabin, who led the robot's creation at the QUT's Institute for Future Environments, in a statement.
"We see the COTSbot as a first responder for ongoing eradication programs -- deployed to eliminate the bulk of COTS in any area, with divers following a few days later to hit the remaining COTS.
The COTSbot becomes a real force multiplier for the eradication process the more of them you deploy -- imagine how much ground the programs could cover with a fleet of 10 or 100 COTSbots at their disposal, robots that can work day and night and in any weather condition."

The team has taken thousands of images and videos of the reef, and refined the COTSbot's stereoscopic vision system so that it can automatically and accurately detect the starfish. It currently has an accuracy rate of over 99 percent.
If it is uncertain that it has seen a Crown-of-Thorns Starfish, it will take a photo to be verified by a human. That data will then be incorporated into its memory bank.
The robot is designed to operate within a metre of the seafloor, and can cruise for up to eight hours at a time, with the capacity to deliver 200 injections.
Its ability to do so will be tested on the Great Barrier Reef later this month, accompanied by human researchers, who will verify the identified starfish before the robot is allowed to deliver any injections.
The autonomous work of the robot is then scheduled to begin in December.
Posted by geogarage at 1:31 AM