This Google Map traces the path of the proposed Nicaragua Grand Canal, that is suspected now under construction, through the mountainous regions of the Nicaraguan ecosystem in order to understand the enormity of the project and its economic and environmental impact on the actual rivers involved.
In other words, unlike conceptual maps that do not really show the areas involved in detail, this map enables you to zoom in close in order to determine the impact for yourself.
source MyReadingMapped

From Scientific American by Pablo Fonseca

Work has already begun on a canal three times the length of Panama’s, which will cut through forests, wetlands, native reserves and a lake

The Nicaragua Grand Canal will be a project of unprecedented magnitude.
The canal’s route has already been determined, as is the number of ships that will be permitted to pass through it each day.
Also decided is who will construct the canal and how many square kilometers of earth must be moved.
What remains unknown is the environmental impact of this potential new slice through Central America.
Nicaragua’s government proposed the project and put the construction of the canal into the hands of Hong Kong Nicaragua Canal Development (HKND), all without soliciting any environmental studies. And now the government claims construction has started.

Nicaragua Pres. Daniel Ortega sees the canal as positive not only for the country, but for the all of Central America.
He has said nothing, however, about the lack of an environmental impact review.
“Today we are a region where we defend the principle of sovereignty...so it is no coincidence that this work begins when in our America we have managed to make this great historical leap toward the integration and unity of our people and our entire region,” Ortega said hours before marking what he called the beginning of construction on December 22, 2014.

Just six days earlier a study on the environmental impact was released, but not for the canal project itself, rather on preliminary construction.
The research was paid for by HKND and performed by consultant firm ERM without government involvement.

The cost of the Nicaragua Grand Canal construction is estimated at $50 billion.
When complete, it would measure 278 kilometers long, whereas the Panama Canal is 77 kilometers long. Its width is set to vary between 230 and 520 meters, with a protection border of five kilometers on either side of the canal.
A large part of the channel would pass through Lake Nicaragua (also known as Lake Cocibolca), the largest tropical lake in Central America.
Construction is estimated to take five years, with completion in 2020.
Ortega announced in February 2012 that the project would resume after being first raised as a possibility in the 19th century.
In July 2012 the nation’s National Assembly approved a special law that would support construction and give wider benefits to the contractor, such as a guarantee of zero criminal punishment for breach of contract, which closed with HKND in June 2013. 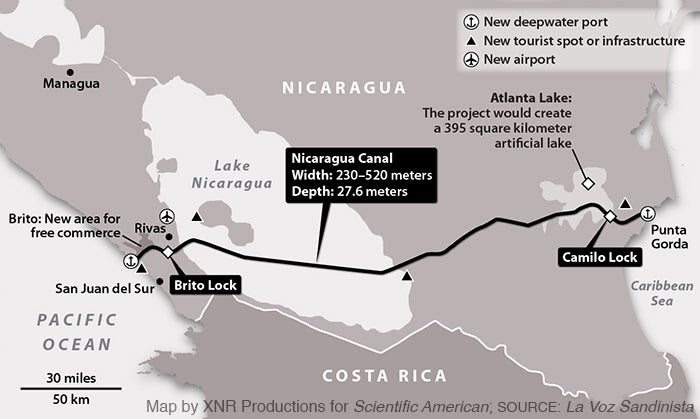 What does the preliminary report say?

Despite Ortega’s statement, ERM’s press department denied that construction has started in Nicaragua.
Instead, it tells Scientific American that work has begun on “improvements” to enable field studies, including cleanup and the construction of access routes.
The preliminary work is classified as “modest” because it includes primarily the construction and improvement of access routes, the clearing of a corridor 50 meters wide and almost 24 kilometers long, and support facilities.
The report said that various problems involving just preliminary construction cannot truly be overcome, even if remedies recommended in the report are implemented.
The most troubling part of the report notes the potential for fuel spills to affect freshwater fish in the area, interrupt agricultural activity and impact cultural heritage on native reserves as a result of work that disturbs the soil.
The report also stated “the acquisition and compensation for the land deal…do not meet international standards.”
Along those lines a series of protests in Nicaragua in late 2014 criticized the manner in which the land was acquired.
Dozens of people were arrested, and international agencies confirmed two deaths.
Scientific American received no reply to requests for interviews about these events with representatives of HKND and Nicaragua’s Ministry of Environment and Natural Resources.

Warnings from scientists around the world

Scientists worldwide also have expressed doubts about the project.
For example, the Association for Tropical Biology and Conservation (ATBC) wrote that the canal will affect “some 4,000 square kilometers of forest, coast and wetlands,” which include the system of wetlands of San Miguelito (protected area under The Convention on Wetlands of International Importance, aka Ramsar Convention, which Nicaragua signed); the Cerro Silva Natural Reserve; the Río San Juan Biosphere Reserve, which contains seven protected areas, including the Los Guatuzos Wildlife Reserve, the Indio Maíz Biological Reserve and the Solentiname Archipelago.

According to ATBC’s statement, this network of reserves “is the habitat of at least 22 species that are vulnerable and in danger of extinction, according to the Red List of [Threatened Species issued by] the IUCN [International Union for Conservation of Nature], including tapirs, jaguars, turtles, marine life, corals and other species; some of the rarest and untouched surviving mangroves, coral reefs, dry forests, rainforests and lakeside habitats that still exist in Central America.”
The statement also said, “The Mesoamerican Biological corridor, designed by governments in the region, would be split in half, and the canal and its infrastructure would create a huge barrier to the movement of plants and animals.”
The international body warned the time has come to “suspend all activity related to the construction of the canal and its subprojects until the conclusion of independent studies and all concerns are adequately addressed.”

Meanwhile the International Society of Limnology issued a statement [pdf] warning that the construction and operation of the canal would compromise the function of Lake Nicaragua as a high-quality source of potable and irrigation water and as key to maintaining biodiversity.
“These negative impacts could see an increase in future periods of drought due to climate change,” according to the group.
International standards “require that environmental studies are completed, revised, and published before work begins.
The actions of the government are creating an environment of mistrust, confrontation and repression. We ask the government of Nicaragua to halt this project until these studies are completed and publically debated,” the statement concluded.

The Humboldt Center of Nicaragua issued a statement along the same lines in a recent study [pdf]. According to their calculations, the canal would require 7.5 million cubic meters of water per day in the rainy season and 8.44 million during the dry season.
And models of climate change’s impact on Nicaragua predict that by the year 2039, engineers operating the canal should anticipate a 3 to 4 percent water deficit.

The Nicaraguan Academy of Sciences also raises a voice

One of the major local critics of the project’s management has been the country’s academy of sciences.
Vice Pres. Jorge Huete-Pérez, a biologist, published an editorial on the subject in Science magazine with other specialists. In an interview with Scientific American, Huete-Pérez says the main concern of the scientific community is what could happen to the water of Lake Nicaragua.
“In the future climate change will affect us, there will be long droughts and the lake is a reservoir,” he says.
“Is it worth sacrificing a source of drinking water, which also serves agriculture and tourism?”
Huete-Pérez also questioned the way in which the project was discussed before being officially contracted, with little transparency and many questions left unanswered. “Something is clear, which is the interest in building the canal without interest in the consequences,” he adds.
“The foundation of the canal is not clear: there is no business plan, no data on the level of uncertainty nor the benefits. What is being done is irresponsible.”

Despite this situation, Huete-Pérez offers a solution that could be satisfactory to all parties, which he alluded to in his Science editorial: Nicaragua’s government could “reconsider the project with international standards in mind” and assign the project’s supervision to an independent national commission.
He also warned, however, that before the closure of legal routes to halt the project, representatives of affected indigenous peoples should present an appeal before the Inter-American Court of Human Rights.