Image of the week : 35,000 walrus converge on Alaska beach as sea ice retreats

Female Pacific walruses and their calves traditionally spend summers far from shore, diving for benthic invertebrates over the shallow continental shelf waters of the Chukchi Sea.
These female walruses and their calves prefer to rest between forage bouts on sea ice drifting above their feeding grounds.
However, in recent years loss of summer sea ice over the continental shelf has forced many walruses to travel to the northwest coast of Alaska where they haul-out on shore to rest.
This large herd of walruses hauled out near Pt. Lay Alaska in August of 2011.
(USGS)

From CNN by Brad Lendon

Arctic ice is dwindling, the waters of the North Pacific Ocean are the warmest on record and tens of thousands of walruses have taken notice, "hauling out" on an Alaskan beach in numbers never seen before.
Photos taken by scientists working for the National Oceanic and Atmospheric Administration show more than 35,000 walruses gathered, or hauled out, on a beach near the village of Point Lay, on the Chukchi Sea in northwest Alaska on Saturday.

The walruses are forced onto land when sea ice, which they use to rest between dives for food, disappears, according to NOAA. A report on Flight 240 of the Aerial Surveys of Arctic Marine Mammals, run by the National Marine Mammal Laboratory, shows no sea ice spotted on Saturday, but it showed 35,036 walruses on the beach near Point Lay, including 36 dead ones.

The number of walruses had mushroomed from an aerial survey only four days earlier, when just 1,500 were spotted at the haul-out near Point Lay.
About 50 dead walruses were spotted in that count.
A NOAA release from 2013 calls the large haul-outs a relatively new phenomenon.
Last year, a NOAA survey counted about 10,000 walruses on the beach near Point Lay.
In 2011, about 30,000 came ashore.
The large haul-outs were first noticed in 2007, NOAA said. (see USGS) 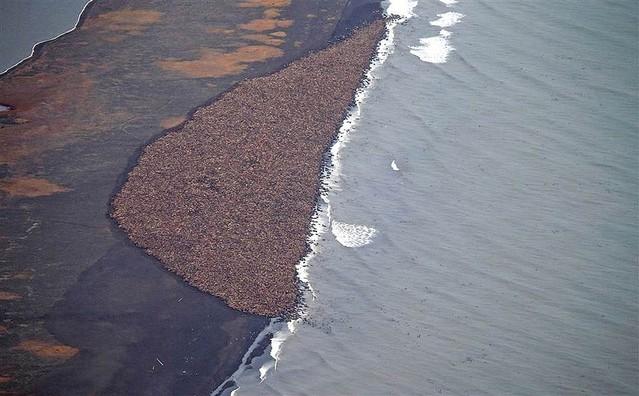 Aerial photography of a huge group of Pacific walruses that grew to an estimated 35,000, above, on Sept. 27, from 1,500 on Sept. 23, (previous picture).
Credit Corey Accardo/NOAA

"The massive concentration of walruses onshore -- when they should be scattered broadly in ice-covered waters -- is just one example of the impacts of climate change on the distribution of marine species in the Arctic," Margaret Williams, the World Wildlife Fund's managing director of the Arctic program, said in a statement.

Point Lay, near where the walruses gathered, is on the Arctic Ocean coast just above the Bering Sea. The WWF says other large haul-outs have been reported to the west of Alaska on Russian shores.
A report from the National Snow and Ice Data Center on September 22 said Arctic sea ice had reached its lowest extent of the year on September 17, the sixth-lowest amount of Arctic sea ice on record.

"We are witnessing a slow-motion catastrophe in the Arctic," Lou Leonard, vice president for climate change at the WWF, said in a statement last month.
"As this ice dwindles, the Arctic will experience some of the most dramatic changes our generation has ever witnessed. This loss will impact the annual migration of wildlife through the region, threaten the long-term health of walrus and polar bear populations, and change the lives of those who rely on the Arctic ecosystem for their way of life."

This year's ice report and massive walrus haul-out come the same month that a NOAA report said sea surface temperatures across a vast expanse of the North Pacific are 5.4 degrees Fahrenheit (3 degrees Celsius) higher than normal.
"Not since records began has the region of the North Pacific Ocean been so warm for so long," the NOAA report says.
A heat map accompanying the NOAA report shows deep red in the Bering Sea, indicating the biggest difference from normal in that expanse of water.
Links :