acquired November 10, 2013
Between November 9–11, 2013, a large iceberg separated from the calving front of Antarctica’s Pine Island Glacier.
Scientists first detected a rift in the glacier in October 2011.
By July 2013, infrared and radar images showed that the crack had cut completely across the ice shelf.
New satellite images now show that Iceberg B-31 is finally moving away from the coast.
The Moderate Resolution Imaging Spectroradiometer (MODIS) on NASA’s Aqua satellite acquired these natural color images of Pine Island Glacier on November 10 (top) and November 3, 2013.
Dubbed B-31 by the U.S. National Ice Center, the new iceberg is estimated to be 35 kilometers by 20 kilometers (21 by 12 miles), roughly the size of Singapore.
A team of scientists from Sheffield and Southampton universities will track the 700 square-kilometer chunk of ice and try to predict its path using satellite data.

After lingering in its birthing bay for nearly six months, an Antarctic iceberg the size of Singapore is finally heading out to sea.

Strong winds blowing off the continent are pushing the giant floe away from its parent, the giant Pine Island Glacier, and the warming Southern Hemisphere's has melted the thick winter sea ice that held the block in place since July, said Grant Bigg, an ocean modeler at the University of Sheffield in the United Kingdom. 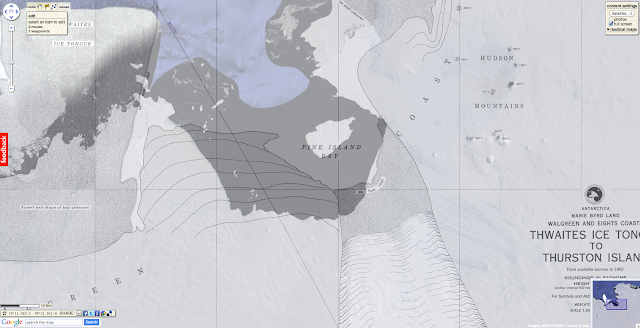 The latest satellite images show several kilometers (a couple of miles) of open water between the iceberg and the glacier, Bigg told LiveScience's OurAmazingPlanet.
"We've been waiting for this to happen," Bigg said.


The enormous ice block took more than two years to calve (break off) from Pine Island Glacier.
A spectacular crack crossing the glacier was first discovered during a NASA IceBridge research flight in October 2011.
The iceberg broke free on July 8, 2013, measuring about 278 square miles (720 square kilometers), according to tracking by TerraSAR-X, an Earth-observing satellite operated by the German Space Agency (DLR).
Bigg recently received a grant to track the drifting floe, which could disrupt international shipping lanes.


For five years an international team of experts, led by NASA emeritus glaciologist Robert Bindschadler and funded by the National Science Foundation and NASA, planned and orchestrated a mission to drill through the floating ice shelf of the Pine Island Glacier. Finally they persevered over harsh weather conditions, a short Antarctic field season, and the remote location of the glacier, and installed a variety of instruments to measure the properties of the ocean water below the ice shelf.

Icebergs sailing into the ocean from West Antarctica may stay close to the continent's coastline, causing little hazard, or launch out into the Southern Ocean toward the Drake Passage near South America's Cape Horn.
Bigg and his colleagues plan to try to predict the iceberg's path up to a year in advance, based on ocean currents and prevailing winds.
The modeling will help the shipping industry improve ice warnings, he said.
Huge icebergs such as the spawn of Pine Island Glacier often shatter into several pieces, and Bigg's team will track and model the fragments if the chunk collapses.
Already, a few small pieces have broken off the west side of the iceberg as it moved in the past few days, Bigg said.
"Each of the last three years has seen a giant iceberg calve, from either Greenland or Antarctica," he added. "Being able to track and forecast the tracks of these huge blocks of ice will be a major benefit to the shipping industry, particularly as more ships begin to use polar waters, as Arctic sea ice melts. This ability is what we aim to develop."