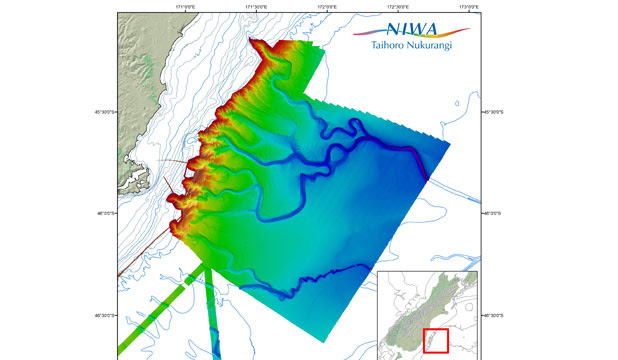 Survey coverage of part of the Otago canyon complex offshore East Coast, South Island extending from Waitaki Canyon in the north to Hoopers Canyon in the south.
Image is a sun-illuminated digital elevation model.
Depth range 100m (red) to 2000m (purple).
>>> geolocalization with the Marine GeoGarage <<<

The first detailed map of part of the Great South Basin provides clues to the area's seafloor life, along with data that could be useful in any exploration of the area for petroleum.
Niwa research ship Tangaroa mapped a 16,000sq km area off the Otago coast last month.

Detail of the survey coverage of the Otago canyon complex.

It revealed the structure of nine canyons which are part of a much larger system which ends about 1100km east of New Zealand in a large deep apron-shaped sediment deposit in the Bounty Trough.
Niwa said the Great South Basin had not been mapped in detail before.
The survey provided new information about geological processes in the region, as well as clues about the types of seafloor life that might live there.

Niwa geologist Dr Helen Neil said the intricate map showed the detail of many near-shore canyons along the eastern South Island continental slope.
They formed a set of tributaries sending sediment to the deep sea.
“It gives us a far greater idea of the structure of the Otago canyon complex. This entire system has a really long history," she said.

The map can also help with the development of a biodiversity assessment of the area that could be used to establish an environmental baseline, evaluate the potential environmental effects of any oil drilling, and help establish environmental guidelines specific to the area.

“We know something about the animals that live in the shallow areas of the canyons, but we don’t know what is in the really deep parts, particularly in the trough where oil drilling may occur in the future,” Niwa seabed ecologist Dr Ashley Rowden said.

Previous sampling of the shallower areas at the heads of the canyons, down to about 200 metres, had provided information about the make up of the seafloor communities in those areas, which included worms, crabs and fish.

The maps also showed pock marks - about 20 metres deep and 200 metres in diameter - along the margin at depths of between 550 metres and 875 metres.

That was the typical depth for methane seepage.
The marks formed when gas or fluid was released.
If methane was still seeping out of those areas they could support particular types of communities where micro-organisms generated energy from the gas.

Another group of organisms, such as clams and tubeworms, kept those micro-organisms inside them. Dr Neil said canyons in the area mapped reached depths of around 750 metres, around 5km to 15km along their length.
They extended in the North, Central and South channels which ultimately merged to form Bounty Channel, which runs through the Bounty Trough.
The trough formed when the Chatham Rise to the north and the Campbell Plateau to the south pulled apart in a tectonic rift about 55 to 60 million years ago.

Since that time some form of channel in the area had been feeding sediment from the land to the deep sea.
The depression was now more than 1000km long and several hundred kilometres wide, Dr Neil said.

Layers of sediment were laid down when big mixtures of material came down the canyon system and overflowed it.
Such events happened repeatedly, although the amount of time between events varied.
Sediment was not being distributed now in the way it had been in the past as the sea level was higher and New Zealand did not have an aggressive glacial environment.
There was also less erosion from the Southern Alps.
Most of the sediment that did come down was trapped in lakes, Dr Neil said.

Canyon, channel, fan systems were important sources of information about climatic events, oceanographic changes, and events onshore.
The sedimentary record that accumulated in those systems could give important insights into major tectonic, climatic and sea level changes of the past.
In the wider Bounty Trough region some research had been done looking through sediments, either physically by taking sediment cores, or by taking a seismic record penetrating through the seafloor.

In the newly mapped area maybe only four or five sites had been sampled, and that was purely for exploratory geology, not for biodiversity, Dr Neil said.

Using the map the seabed could be divided into different types of area, such as channels, flats and slopes, which provided target areas to sample.
Representative areas could then be sampled to find out what organisms were present.
Niwa said data from the survey could also support petroleum exploration of the area.