Isaac storm as it appears in a visualization of America's wind

Here's a view of Hurricane Isaac unlike any other you've seen so far.

This comes from hint.fm, a collaboration of data-visualization stars Fernanda Viégas and Martin Wattenberg, leading Google's "Big Picture" visualization research group in Cambridge, Massachusetts.
Their wind map provides a nearly real-time glimpse of the wind flow around the United States, based on hourly data drawn from the National Digital Forecast Database.
"So," they write, "what you're seeing is a living portrait."
(It looks even better on their site, so definitely click through to see it in its full glory.) 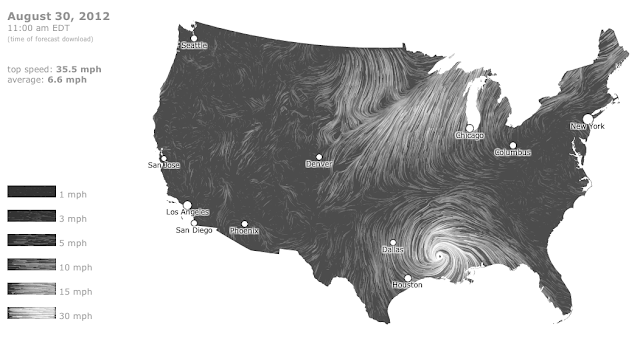 The beautiful side of storm Isaac (zoom New Orleans)

The map is always beautiful, even without a hurricane's massive force.
Today, though, it can give you a sense of just how far-reaching are Isaac's effects, just how much of the country can feel the winds, literally, of a storm in the gulf.

Hurricane Isaac moved towards New Orleans and the Gulf Coast on August 28, 2012.
This movie shows the movement of the hurricane from dawn to dusk.
GOES-14—a geostationary weather satellite temporarily taken out of on-orbit storage—took one image every minute, compared to the standard of one image every 15 minutes.
The "super rapid scan" images reveal the movement of clouds at different altitudes, and the rapid development of thunderstorms near the storms core as evening approached.
Images courtesy NOAA and the University of Wisconsin-Madison Cooperative Institute for Meteorological Satellite Studies.