New interpretations of the Antikythera Mechanism reveal that it could be used to predict eclipses, and that it had a dial recording the dates of the ancient Olympiads.
The 2,000-year-old box of intricate gearwork provides a glimpse of the engineering prowess of the Hellenic world
(Natikythera mecanism Nature video -part II-)
From TheGreekReporter

The Department of Alexandria has organized a conference and exhibition on ”Science and Technology in Ancient Greece”, on June 8, 2011.

The Associate Professor at the University of Athens Xenofon Mousas will give a talk on ”Antikythera Mechanism, the First Mechanical Universe and Computer”.

Nefertiti Megahed, Professor of Mathematics at the University of Cairo will talk about ”Maths in the Mediterranean: Egypt and Greece”.
Dr. Flora Vafea will focus on Αstrolabe (astronomical instrument that locates and predicts the position of stars and planets).
The exhibition will contribute in a more global presentation of the topic, which designates the relations between Greek and Egyptian civilizations; two civilizations that were developed around the Mediterranean Sea.

At the end of talks, another topic related to the photograph exhibition will be inaugurated.
The presentation includes photographs of the Antikythera Mechanism, accompanied by short texts in Greek and Arabic. 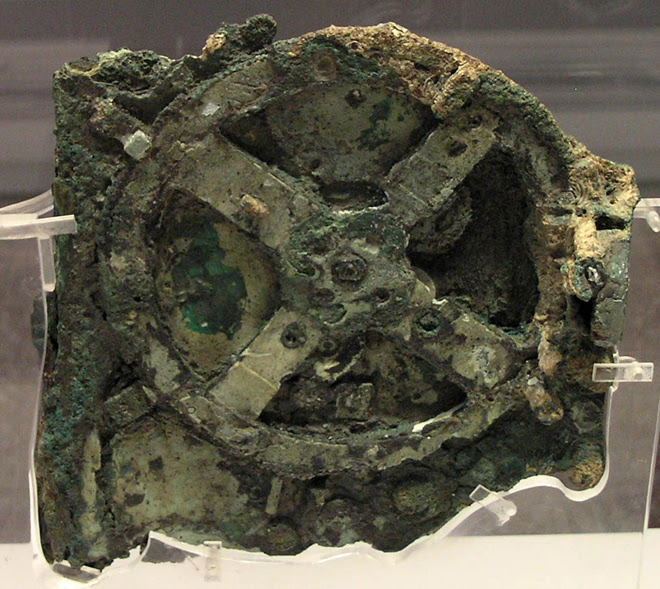 This mechanical wonder was found by a diver exploring a shipwreck off the coast of Greece in 1900.
It is an ancient analog computer, built around 150 BC, that calculated astronomical positions and the dates of upcoming Olympic games.
The machine is built as an interlocking system of gears and rivals 19th-century Swiss clocks for accuracy and complexity.
Recently, Apple software engineer Andrew Carol built a 1,500-part LEGO replica (video)
With it he accurately predicted the upcoming solar eclipse of April 8, 2024.
The Antikythera Mechanism, is one of the most globally important discoveries of the Antiquity.
It is the oldest known complex scientific calculator, as well as astronomical clock and planetarium.
It is considered to be one of the most advanced astronomical clocks discovered in Europe, especially after the 14th century.

It was maintained for 23 centuries at the bottom of the sea and was discovered in a shipwreck, in Antikythera by Symian divers around 1901-1902.
The ship carried priceless treasures from Greece to Rome.
Today, the Antikythera Mechanism can be found in the Archaelogical Museum of Athens.

The exhibition was designated by Xenofon Mousas, Member of the International Mechanism Study group, the results of which are based the reconstructions in computers and cartoon films, as presented in the exhibition.
The exhibition presents the evolution of Greek astronomy and astrophysics, which became a real science in Greece due to the use of appropriate maths and physics that allow the comprehension, interpretation and prediction of astronomics through evolving mathematical models.
The exhibition will be presented in Greece, Cyprus and many more countries around the world.