Despite the availability of satellite navigation systems, and ships that are awash with electronics, maritime buoyage still matters, particularly in pilotage waters where visual aids provide the best possible way of marking a channel or identifying obstructions.
These days, buoys can be “intelligent” in that they have radar reflectors to help them show up on ship radars, possibly fitted with electronic beacons that show up on electronic charts and even made individually identifiable through their own Automated Identification System signatures.
Buoys still remain very useful indeed.

It is the International Association of Marine Aids to Navigation and Lighthouse Authorities which provides the global pattern for the maritime buoyage system.
It established an internationally-accepted system in 1970 which set the colours, shapes, topmarks , lights etc for buoys, so that seafarers can use them around the world, even though there remain some differences between the two geographical zones with which history has left the industry. 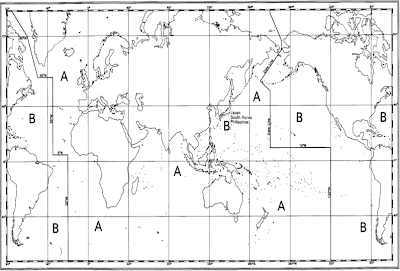 IALA maritime buoyage system (source) :
different from regions A and regions B 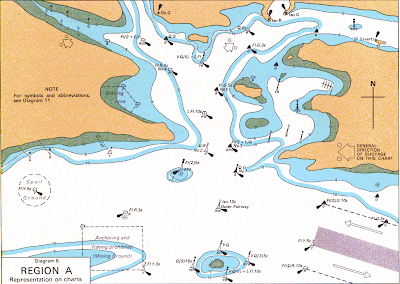 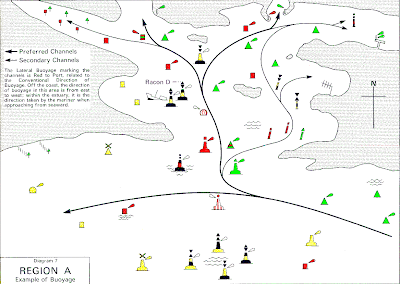 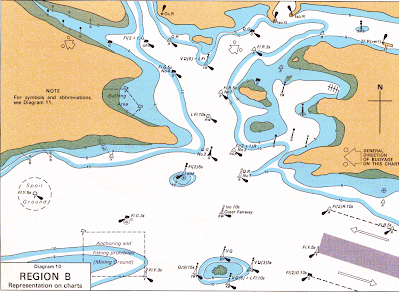 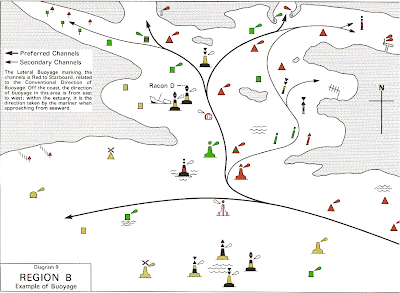 IALA buoyage System B
The mariner uses buoys much as he always has, as an indication of his position and to show him the extent of a navigable channel, or to mark an isolated hazard, such as a wreck over which his ship should not pass.
Buoys use distinguishing colours, marks and shapes to assist the navigator in their use.
The new system provides for a newly designed wreck marking buoy, and clearer distinguishing marks, along with provisions for more use of electronics and some ingenious new methods of lighting.

One problem with channel buoys in particular is that when viewed against a well-lit coastline, they are hard to distinguish from lights ashore in the background.
This is a particular problem approaching a coast or port.
However, it is now possible to synchronize the flashes of lights along a channel, so that they either flash together, or in sequence, which makes them far easier to distinguish from others.
Confusion can also be reduced by the use of “flickering” lights, rather than the traditional signals which provide for long, short or quick-flashing signals.

The new system which was agreed by IALA earlier this year is given wide promulgation through the International Maritime Organization and is very much a system that will permit future electronic developments.
These might include provisions for more electronic navigation and even the use of “virtual” buoys that would be shown on an electronic chart.

With any changes to navigation systems, great care has to be taken to ensure that changes are minimal, and do not cause confusion in an international industry.