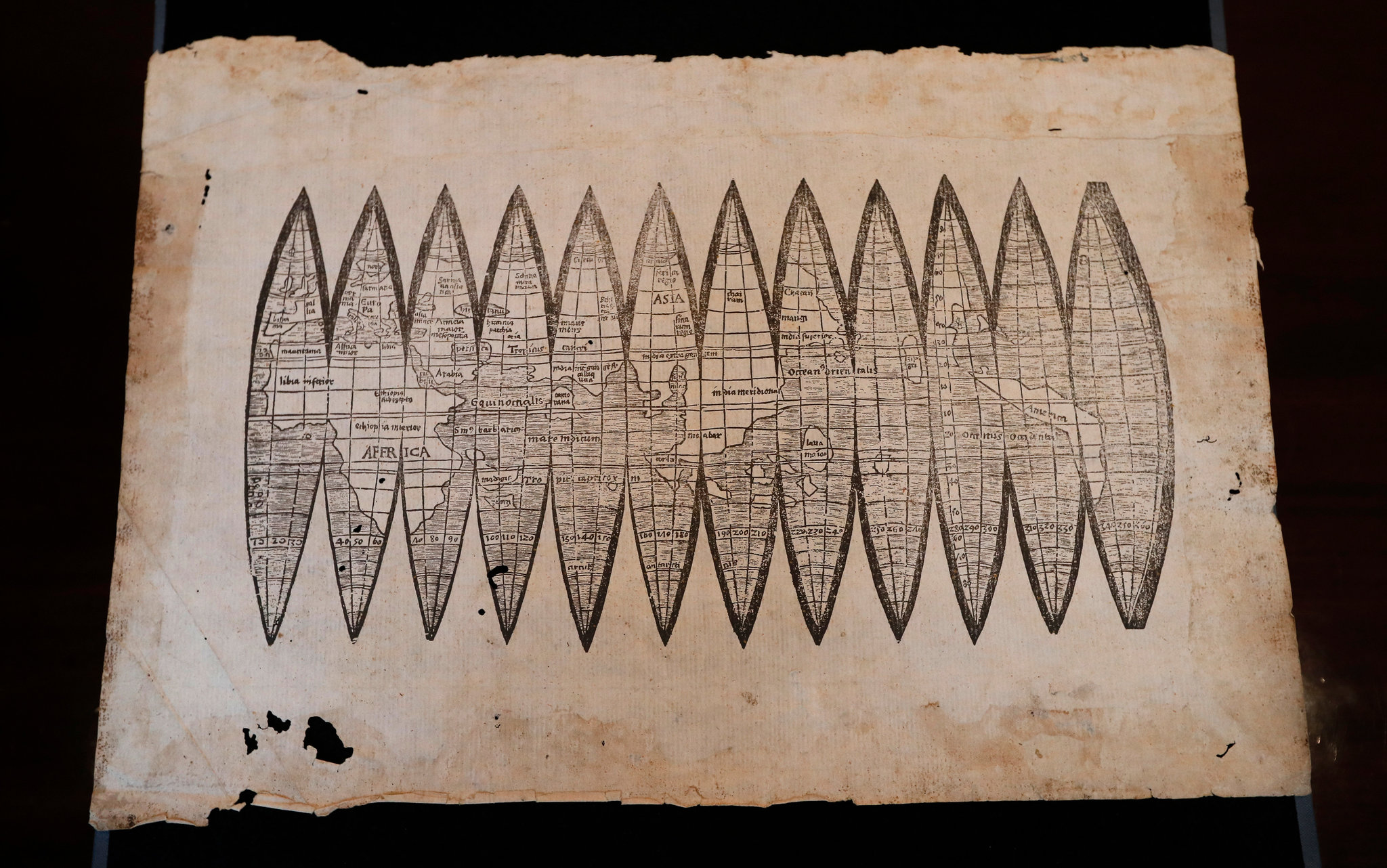 This newly discovered print of Martin Waldseemüller’s 1507 map was to be sold at auction this month until experts raised concerns about its authenticity.
Credit Kirsty Wigglesworth/Associated Press

From NYTimes by Michael Blanding

Is the supposed 6th example of the Waldseemüller globe gores of c.1507 a photographic fake, copied from the example in the James Ford Bell Library at the University of Minnesota ?

The map seemed to be an unbelievable find, an unknown fifth original of the rarest of documents, a vision of the world, circa 1507, by the famed German cartographer Martin Waldseemüller.
It features 12 so-called globe gores — like a world map drawn on an orange peel that has been sectioned and squashed flat.

Designed to be cut out and pasted around a sphere, these creations of Waldseemüller are thought to be the first printed globes ever made, as well as the first maps ever to use the name “America.”

Christie’s, the auction house, estimated the new find would fetch from $800,000 to $1.2 million when it went on the block Dec. 13 at its London salesroom.

But something about the map didn’t seem right to Alex Clausen, a San Diego-based rare-map dealer, who compared it to high-resolution images of the other known copies.
“The printed image was either quite heavy or missing altogether,” he said.
“We were suspicious right from the beginning.” 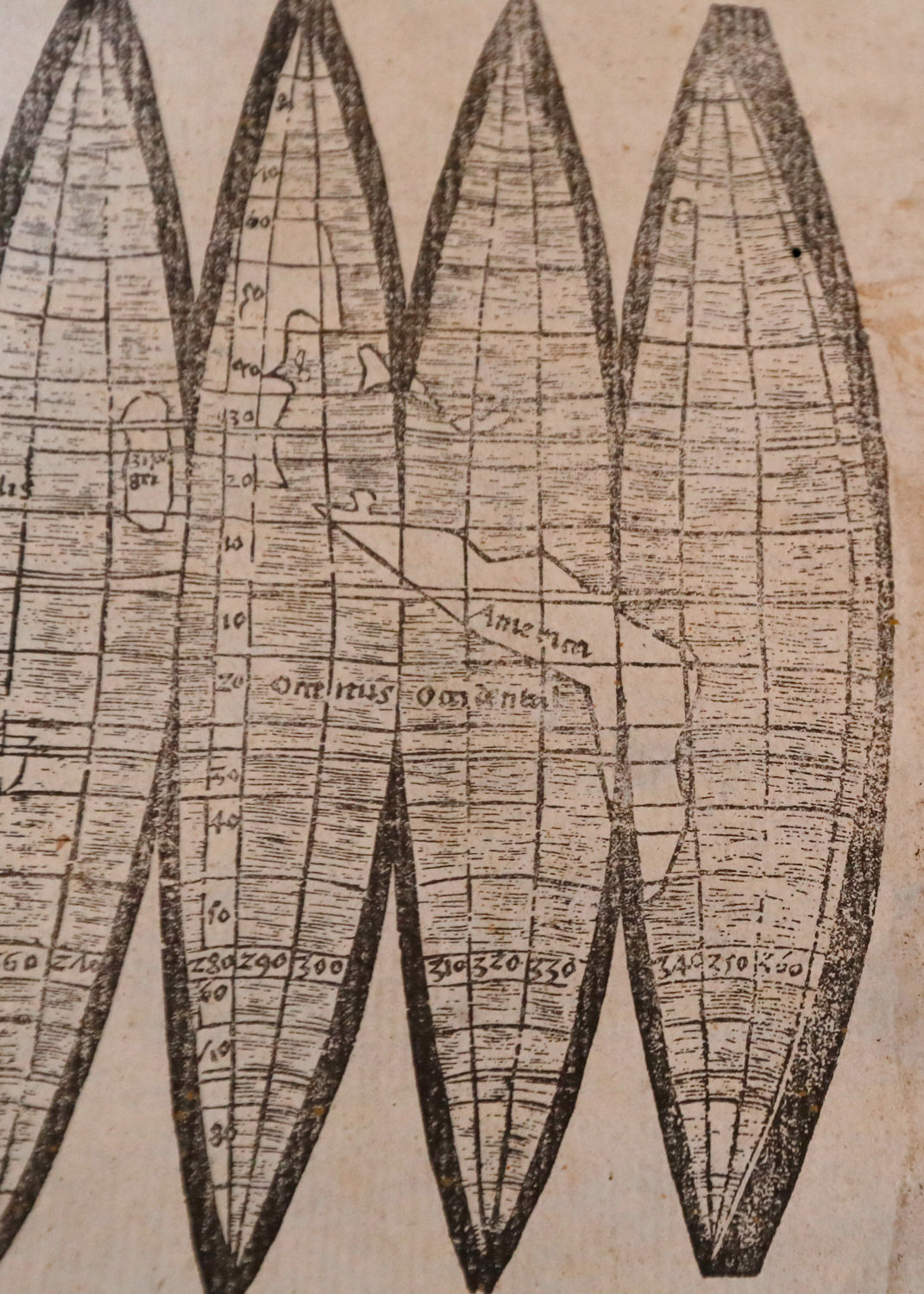 The Waldseemüller map, of which there are several accepted originals, is considered to be the first to mention America.
Credit
Kirsty Wigglesworth/Associated Press

In recent weeks, he and other experts approached Christie’s with their concerns, and last week the map was withdrawn from auction until questions about its authenticity could be resolved.
“We did a thorough analysis and have found evidence that supports assertions that a photograph was used to create a photomechanical reproduction,” said Julian Wilson, a specialist with the auction house’s Books & Manuscripts Department.

When a map promoted as being extraordinarily rare, like this one, appears on the market, if often attracts wide attention from experts in the field, who use high-resolution images to study the artifact.
In this instance that scrutiny led to the questions.

The experts — including Mr. Clausen’s employer, Barry Ruderman of Barry Lawrence Ruderman Antique Maps, and Michal Peichl, a Houston-based paper restorer — had many concerns about the map.
For a 500-year-old document, they said, the provenance for it supplied before the auction was a bit thin: the estate of a British paper restorer.

The paper, with remnants of glue, seemed old enough.
But in one spot, Mr. Peichl saw, print from the map seemed to be on top of the glue, suggesting that the map’s image was superimposed on the paper after it had been removed from a book.

They also spied irregularities in the printing that could suggest photomechanical reproduction.
An original 16th-century map would have been made by gouging an image into a piece of wood, removing anything not to be printed, and then inking it and pressing a piece of paper onto the relief.
The blocks can degrade over time as they become worn, so subsequent originals can lose detail.
But the Christie’s map seems to have gained detail in several spots when compared to one of the originals, which the experts said gave them pause.

Nick Wilding, a rare-book expert who teaches history at Georgia State University, found more troubling evidence.
Mr. Wilding won fame in rare-book circles in 2012 for exposing a book, promoted as a rare ancient copy of a work by Galileo, as fraudulent.
For Mr. Wilding, the biggest clue that something was off, he said, was a white line in the Christie’s map.
It matched a spot in an authentic print of the map now held at the James Ford Bell Library at the University of Minnesota in Minneapolis, where extra paper had apparently been added to repair a tear.

An original map, one that came directly off the woodblock, would not have replicated that tear, which happened later, Mr. Wilding said.
But this map did and so, he said, he believes the map Christie’s has represents a reproduction of the Bell map.

(A version of the Waldseemüller map in Munich in the Bavarian State Library also includes the white line, while two other copies of the map lack it.
The Bavarian library said that, informed of concerns about the Christie’s map, it is now reviewing the authenticity of its own.) 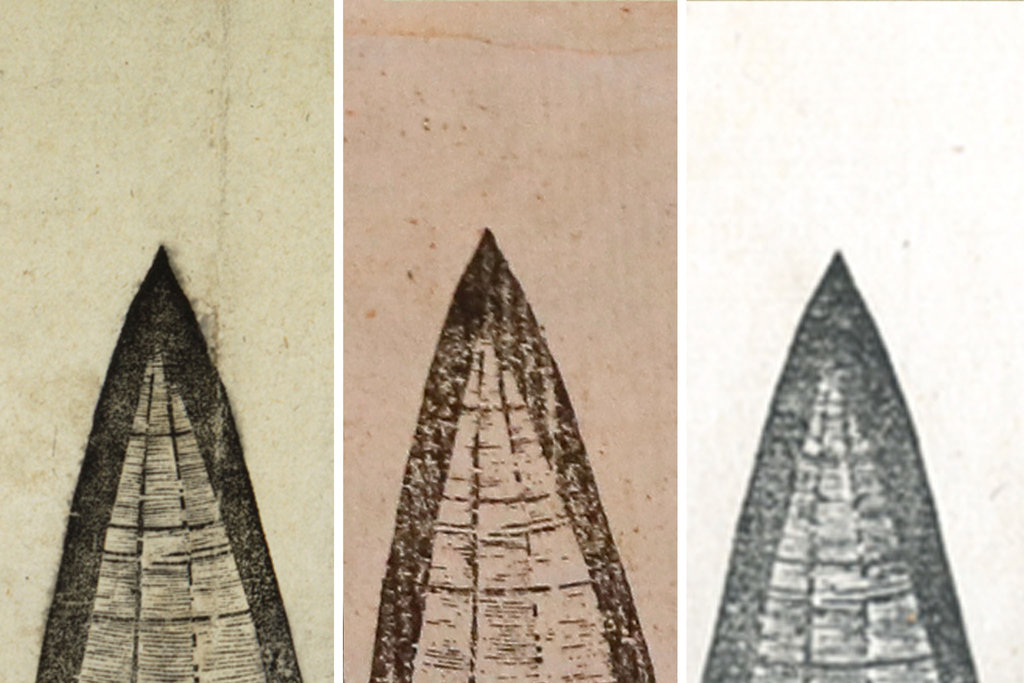 Experts noted a difference between a section of the map as i appears on prints held in Minneapolis, at Christie's and in Offenburg, Germany.
A white line from a tear is visible on the Minneapolis map (left).
The same line appears in the Christie’s map, (center) which experts said suggested it had been created through photo-reproduction of the Minneapolis map.
The tear line is not visible in an original print in Offenburg.
Credit James Ford Bell Library, University of Minnesota; Associated Press; Museo Galileo

Christie’s made the decision to withdraw the map after Mr.
Wilson traveled to Minnesota in recent days and reviewed the two maps side by side.
“Obviously, it was a bit of a blow,” he said.
“But you never stop learning in this business.”

Three months ago, Mr. Wilson had been overjoyed when a man who identified himself as a descendant of Arthur Bruno Drescher, the paper restorer, brought the Waldseemüller map into Christie’s London office off the street.
The man, who the auction house said preferred to remain anonymous, said he had found the map among his deceased relative’s papers.
As Mr. Wilson held it up to the light against a window, the paper seemed to be authentic.
“My legs began to shake,” he later said.
“I never imagined I would ever have come across this map.”

For additional proof then, he flew to Munich to compare the map to the one in the Bavarian State Library.
That map tucked into a copy of Ptolemy’s Geographia, was thought to have had a provenance dating back to the 1700s.
It later ended up in the hands of the storied collector H.P. Kraus before the library bought it from his estate for about $1.2 million in 1991.

Comparing the two copies, Mr. Wilson found that, while the paper was different, the image printed on them was a perfect match.
Several other experts consulted by Christie’s agreed it appeared authentic.

When Mr. Clausen contacted him in early November with concerns, Mr.
Wilson said in an interview that he had remained confident because, among other things, the paper and the Bavarian map’s long provenance seemed solid evidence that the map he was bringing to market was indeed an original.

Mr. Wilding, however, has since suggested that the provenance of the Bavarian map is also suspect, and said the first time that map was mentioned in any document was in 1960. 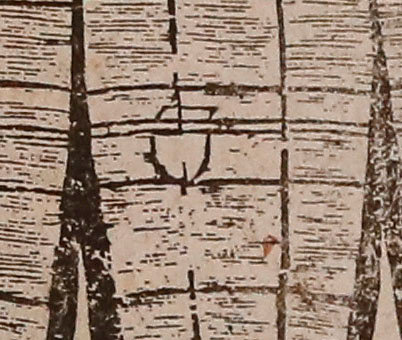 One of the experts focused on a spot of glue visible in this detail of the Christie's map as a reddish tint.
The spot is on the globe gore that is fourth from the right.
Credit Kirsty Wigglesworth/Associated Press 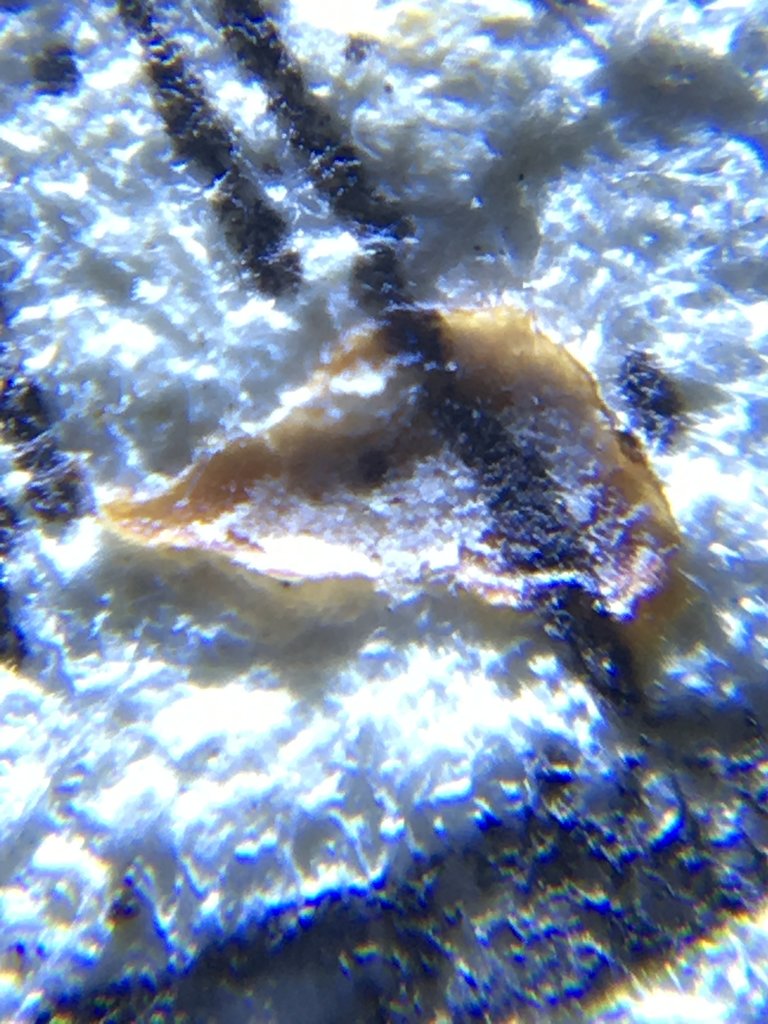 The glue on the Christie’s map, magnified 60 times, shows the print of the map on top of the glue, not beneath it, as experts would have expected in an original.
Credit Michal Peichl

For collectors and historians, any Waldseemüller map would be a magnificent find.
In the early 16th century, when the cartographer joined a group of other humanists in the town of Saint-Dié in the mountains of eastern France, Europeans’ view of the world was based almost entirely on Ptolemy, the second-century Roman mathematician.

While Ptolemy’s geography was accurate for Europe, it became increasingly speculative as it ventured farther into Africa and Asia.
Waldseemüller and his partner Matthias Ringmann set out to create a new edition of Ptolemy that would correct some of these errors and incorporate new discoveries filtering in from explorers like Columbus.

Among the sources Waldseemüller and Ringmann perused were letters written by the Florentine explorer Amerigo Vespucci.
They described a “new world,” not depicted on Ptolemy’s map, that lay far to the southwest across the ocean.
The pair rushed out new maps focusing on these exciting discoveries, including the globe gores and a large wall map — the only surviving copy of which was acquired by the Library of Congress in 2003 for $10 million.

With the globe gores, Waldseemüller sought to go beyond Ptolemy, who only covered 270 degrees in his world map and who focused on the three known parts of the world — Europe, Africa, and Asia.
Globe makers had traditionally left the other 90 degrees a blank terra incognita, or marked it as all ocean.

Using Vespucci’s letters along with manuscript maps of Spanish and Portuguese explorers, Waldseemüller created a fourth part of the world — a new landmass surrounded entirely by water.

In naming this new place, Waldseemüller and Ringmann passed over Columbus, who had first reached the New World in 1492, but only set foot on the mainland in 1498, in favor of Vespucci, who said he had landed there in 1497.
They squeezed the word that honored him, America, into the sliver of continent on both maps representing the modern coast of South America.

Scholars later doubted whether Vespucci had actually visited America as early as 1497.
Even Waldseemüller apparently had second thoughts, leaving the name off his later maps.
But the name stuck and was adopted by other mapmakers.

The mapmaker Martin Waldseemüller named America after the explorer Amerigo Vespucci.
Waldseemüller was the first to create a full 360-degree view of the world that included the Pacific Ocean, and the first to use the name ‘America’ to label any part of the world.
Credit via, Catalog of the Exhibition

For years, only one of the globe gores was known to exist.
Once owned by the Prince of Liechtenstein in the late 19th century, it made its way to the Bell Library in 1954.
A second copy appeared at a Sotheby’s auction in 1960, and was bought by Mr.
Kraus, whose heirs later sold it to the Bavarian library.
More recently, two other copies believed to be authentic have emerged, one from a monastic library in Offenburg, Germany, in 1993 and another discovered in a European collection and sold by Christie’s in 2005 for $1 million.

Of course, it was exciting for many in the trade to think there had been a fifth version of the globe gores in existence.
But if there is a silver lining to such doubts, the experts said it was that today’s technology has made it easier to spot possible fakes and forgeries from afar.
“It proves,” Mr. Ruderman said, “that in modern times, a collector or dealer, with just the technology on their desktops, can identify a forgery that consistently fooled auction houses and experts in the past.”