Could a Titanic seawall save this quickly sinking city?

KuiperCompagnons Nieuw Waterfront Jakarta from PlusNewMedia
Jakarta is considering a $40 billion-plus project to build an outer sea wall and 17 artificial islands, which together would be shaped like a Garuda—the mythical bird that's Indonesia's national emblem.

From National Geographic by Wendy Koch

Jakarta, Indonesia’s fast-growing capital of 10 million people, is embarking on one of history’s biggest seawall projects—to be shaped like a Garuda, a mythical bird-like creature.

Standing on the banks of Jakarta Bay, Victor Coenen sees flimsy houses with sheet metal roofs sitting on the city’s seawall.
A girl wearing flip flops and a pink bow walks along the wall, only a couple feet off the ground.

Coenen points to cranes trying to clear waterways that are clogged with plastic debris and water hyacinth while nearby, in the low-lying Pluit district, mopeds and bicycles ride through flooded streets.
“The city cannot keep up with the sinking,” says the Dutch physical geographer during a tour of the town, noting it’s dropping 3 inches (7.5 centimeters) each year on average and up to 10 inches in some areas—exponentially faster than Venice, the famous “City of Water.”

In fact, Jakarta could be the Titanic of the world’s metropoles, a place where children wade through waist-deep brackish water to get to school and nearly half its people live with frequent flooding.
Last Christmas, during high tide, water poured over the Pluit seawall.
In 15 years, 80 percent of the northern city will lie below sea level—up from 40 percent now.
In 50 years, current streets could be at least 10 feet below it. 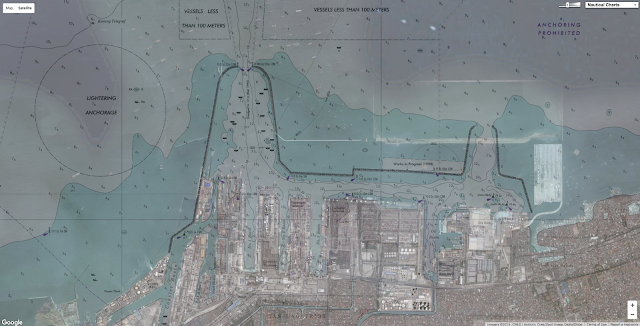 Jakarta with the GeoGarage (NGA chart)

So this former Dutch trading post is embarking on one of history’s biggest seawall projects.
In three phases over three decades, it aims to build an exterior wall off the coast that would be 25 miles (40 kilometers) long and 80 feet high, a third of which would sit above sea level.

That’s not all.
To help pay for the $40 billion-plus behemoth, developers could buy land on 17 new artificial islands and build luxury homes, shopping malls and Grade-A offices.
Together, the wall and islands would be shaped like a Garuda, the mythical bird-like creature of Hinduism that’s the national emblem of Indonesia.
“We’re trying to build a seawall city. That’s completely new,” says Coenen, who’s managing the project in Jakarta for the engineering and consulting firm of Witteveen+Bos, part of a Dutch consortium that prepared the master plan.

Flimsy homes are built on the existing sea wall in the low-lying Pluit area of Jakarta
as shown on February 2, 2015.

The Great Garuda, as it’s known, has only just begun.
Last year, the city began work on the first phase, which entails raising the existing sea wall an average of seven feet over the next two years.
Officials will then decide whether to give the go-ahead for the final two phases, but it’s unclear what they’ll do.

Also unclear: Would this project, which has plenty of skeptics, even work?

The Lure of Seawalls

Since ancient times, seawalls have been built to keep water at bay.
Their popularity is on the rise as the world’s seas, almost a foot higher than a century ago, are projected to climb more because of climate change.
Countries across the globe will build walls to protect themselves, because the price of these projects is cheaper than the cost of flooding, according to a 2014 study.

The U. S. government spent more than $14 billion on gates and walls to protect New Orleans after Hurricane Katrina devastated the Gulf Coast in 2005.
The Dutch have built huge dikes, and in 2010, South Korea finished the world’s longest man-made one: the 22-mile Saemangeum Seawall.

Jakarta’s plan is controversial.
A government study said it could erode islands, damage natural habitats such as coral reefs, and force the relocation of thousands of coastal people including fishermen.
Skeptics say it could exacerbate corruption, spur more development, and avoid fixing the root of the problem: massive groundwater extraction.
“It’s treating the symptoms, not the cause,” says Christophe Girot, a professor at the Swiss Federal Institute of Technology in Zurich who did a case study on Jakarta.
He says most of the sinking is due to households, developers, and industry illegally extracting groundwater to obtain free fresh water.
“It’s the Far West. It has a frontier feeling, a free-for-all,” Girot says, noting the city grew rapidly without treating enough wastewater to provide piped-in drinking water for all residents.
Also, he says it’s failed to stop the dumping of trash into the waterways, an estimated 500 tons daily, that make the water costlier to clean.
“You just throw your stuff into the river,” which can be 20 feet deep in plastic, he says.
“It’s a self-perpetuating problem,” he says, and since the water is a toxic sludge containing lead and mercury, “it’s also a public health problem.”

Cranes remove water hyacinth from the Pluit flood reservoir on Feburary 2, 2105.The fast-growing hyacinth, along with trash, clogs waterways and drainage pumps.

Others agree.
A recent editorial in the Jakarta Post, Indonesia’s largest-circulation English language daily newspaper, called for a “high-capacity” wastewater treatment plant.
“Although it took them decades, Tokyo and Bangkok have managed to stop groundwater extraction and Jakarta definitely can do it, too. It must,” the paper says.
“And when Jakarta has done it, who needs to close Jakarta Bay with a giant seawall?”

“You have to do it all,” says Gijs van den Boomen of KuiperCompagnons, a Dutch firm that designed Jakarta’s urban plan.
If people wait for the city to take all the steps needed to stop groundwater extraction, he says it will be too late.
“It’s staggering, almost unimaginable,” he says about the scope of the sinking. He says the project includes cleaning the 13 rivers that will pour into a newly created reservoir—located between the outer and inner seawalls—and treating the water so “we don’t create a lagoon of death.”

Woman picks through trash that surrounds a slum in northern Jakarta on February 1, 2015.

Coenen says there are hydrological deadlines.
Parts of the current seawall, raised in 2008 after a massive 2007 flood covered nearly half the city in as much as 13 feet of muddy water, are already submerged at high tide.
He says upgrading it will protect Jakarta only until 2025, at which time the outer wall will be needed.
“There are no small or easy solutions,” he says, noting it won’t be easy for the city to either halt subsidence or build the Great Garuda.
He says it’s approved funds to heighten the one third of the current wall that sits on public land; the other two-thirds tend to be in better shape, because landowners protect their property.

The Dutchmen working on the project acknowledge it could cause some environmental harm, but they don’t see a better alternative.
They expect changes to their master plan as the city decides whether to proceed. Since the outer wall will take six to eight years to build, Coenen says, Jakarta needs to get started within a few years.
“This is a city of maybe,” he says, adding: “It’s difficult to predict what will happen.”