Don't call it a blood moon. Or Supermoon. Or Blue moon

On Wesnesday, Humanity will be treated to a celestial trifecta: A supermoon (meaning it’s relatively close to Earth), but also simultaneously a blood moon (it’ll be orange or red), but also simultaneously a blue moon (the second full moon in one calendar month) will pass in the shadow of Earth, for a total lunar eclipse.
It’s going to be righteous.

But supermoon? Blue moon? Blood moon?
Yeah, let’s go ahead and pump the brakes on those terms, because the first was created by an astrologer, the second is highly subjective, and the third was only recently popularized by this-must-be-prophecy types.

First, some basics on the grand astronomical event.
A total lunar eclipse is, of course, when the moon passes through the shadow of the Earth.
But the Earth doesn’t actually cast one super-delineated shadow.
There are two components: the penumbra and umbra.

“The reason there are these two portions of the Earth's shadow, umbra and penumbra, is because the sun is not a single small point, it's got this big disk,” says Noah Petro, a research scientist at NASA’s Goddard Space Flight Center.
So the penumbra is more a partial shadow, caused by a portion of the sun being blocked by the Earth. 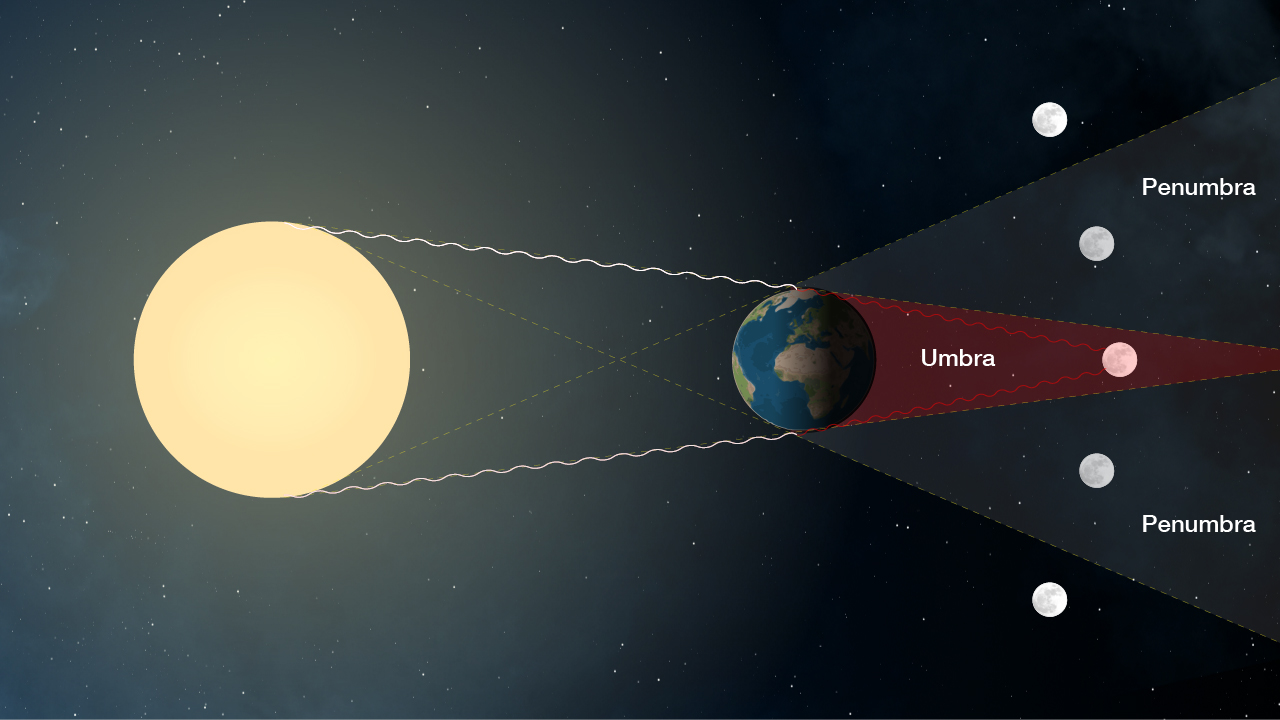 You can see that light sneaking through in the penumbra.
If you glimpse the moon when it’s there, it still won’t have the reddish or orangish or brownish hue it takes on during the so-called blood moon.
“Only once it passes completely into the Earth's umbra does it turn that red color, and the reason for that is because it's very, very dim,” says Petro.
“So just having any part of the moon illuminated by sunlight during an eclipse, washes out that red color that you would eventually see when it's in totality.”

That bizarre color comes from Earth itself.
As sunlight passes through our atmosphere, it interacts with particles like dust, scattering certain colors.
Specifically, blue, which has a shorter wavelength.
Red and orange with their longer wavelengths will pass right through.

It's nearly impossible to compare the apparent size of the supermoon with a micromoon from memory, but when seen side-by-side as in this graphic, it becomes clear.
NASA/JPL-Caltech

Think about the different kinds of light you see here on Earth.
We get blue skies during the day because when sunlight hits us head on, the blue light scatters toward us.
“When we have a sunset, the sunlight is going through a thicker portion of the Earth's atmosphere, and so more of the blue light is scattered away,” says Petro.
Thus the reds and oranges of a particularly magnificent sunset.


Nicknamed "blood moon," some ancient cultures regarded a total lunar eclipse as an ominous event. Today, this celestial phenomenon generates excitement and wonder.
Unlike a solar eclipse, which may require travel to see, total lunar eclipses can often be observed from the entire nighttime-half of the Earth.
Learn what causes a lunar eclipse and how it gains its crimson coloring.

So we’re going to have ourselves a “blood” moon.
But … hold on.
“I think the term more recently, really in the last decade or so, has become popular by these religious zealots that keep proposing that it's the end of time and this lunar eclipse is going to be the last one,” says Fred Espenak, scientist emeritus, also of NASA’s Goddard Space Flight Center.
Indeed, take a look at the Google Trends of “blood moon” below.
“The term has been around for centuries, but in obscure texts,” Espenak adds.
“Even the Bible says something about a blood moon.
But that's open for interpretation exactly what that means.” It could have been a lunar eclipse, sure, or some kind of phenomenon that turned the moon red.
Forest fires, for instance, or a volcanic eruption that burped particulates into the atmosphere.

A lunar eclipse, super moon and blue moon are about to happen at once.
Here's what you need to know.

The recent emergence of the term probably came from the book Four Blood Moons: Something Is About to Change by the pastor John Hagee, according to Bruce McClure and Deborah Byrd over at EarthSky.
Reads the book’s blurb: “Just as in biblical times, God is controlling the sun, the moon, and the stars to send our generation a signal that something big is about to happen.”

2x full moon during this month and also in March

Well, no, not really.
The big thing that’s about to happen is a magnificent total lunar eclipse.
“I think using these terms like ‘blood moon’ just obfuscates exactly what is going on, and it just perpetuates some of the superstitions surrounding this sort of stuff,” says Espenak.

What is a supermoon?
Find out what makes the moon appear extra big and bright, how it effects the tides,
and how the phenomenon got its name.

Speaking of superstitions, the next part of the celestial trifecta, the supermoon, is kinda problematic as well.
“The history of the ‘supermoon’ is not of astronomy,” says Petro.
“The first person to define a supermoon was an astrologer, and of course that gives us heartburn.” Specifically, an astrologer named Richard Nollelle, who claimed that the supermoon could impact the weather.
Which, no.