Trump would open nearly all U.S. waters to drilling. But will they drill?

The Trump administration’s move to open nearly all of America’s coastal waters to offshore oil and gas drillingwould give energy companies access to more than a billion acres off the Atlantic, Pacific and Arctic coasts.

Mr. Trump’s plan upends a decades-long effort to balance the nation’s energy needs with protecting ocean ecosystems, and it is meeting stiff resistance from governors up and down the coasts.
Secretary of the Interior Ryan Zinke announced on Jan. 9 that Florida was off the table after meeting the state’s governor, Rick Scott.
But 10 days later, a senior Interior official appeared to contradict Mr. Zinke, telling a congressional hearing that the secretary’s decision was not final.

Other states are also seeking exemptions. 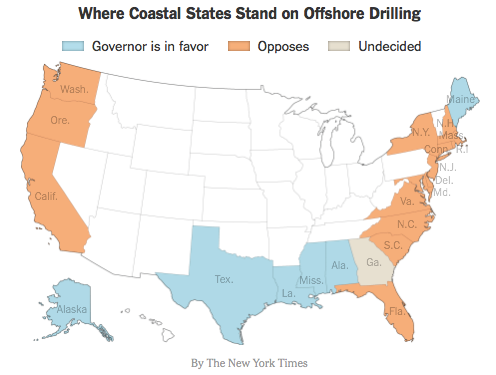 The California attorney general, Xavier Becerra, a Democrat, has asked why the Trump administration felt Florida’s coastline was valuable enough to preserve, but not California’s.
The Republican governor of South Carolina, Henry McMaster, has also asked the Trump administration for a drilling exemption, citing the risks that oil and gas would pose to the “unspoiled beauty” of his state’s beaches.

All told, at least 15 governors of coastal states, one-third of them Republican, have publicly opposed Mr. Trump’s offshore drilling plan.
How did we get here, and what’s at stake?
Here’s the breakdown.

Most coastal states control leasing off their shorelines out to three nautical miles.
At least 200 miles beyond that, the federal government owns the seabed and its mineral resources — some 1.7 billion acres’ worth.

The Department of the Interior parcels out offshore leases in those areas under five-year plans.
Both Congress and the president also have the authority to impose protections and moratoriums that render areas off limits to leasing.

The oil-rich western and central parts of the Gulf of Mexico have been open to drilling for decades, while other areas have been withheld from leasing or protected under moratoriums and other protections.

And each of the last three presidents has had differing ideas about how to parcel out leases.

These three maps break down the changing status of the offshore zones: Areas open to drilling leases, areas not yet open to leases, and areas under protection, where leases are prohibited. 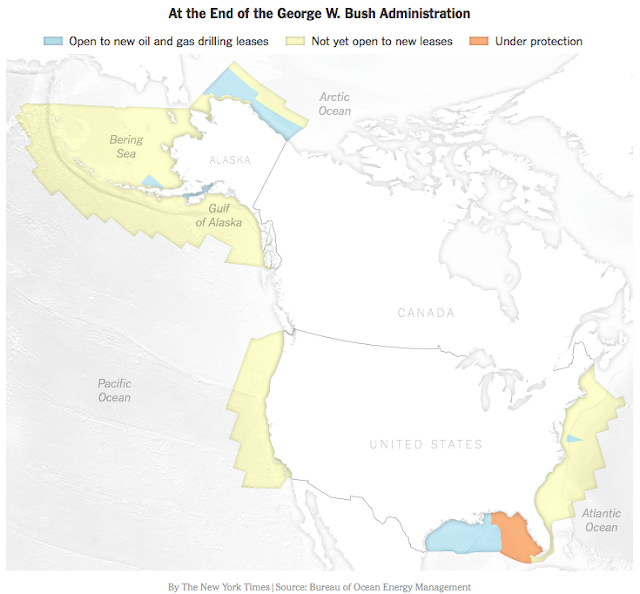 President George W. Bush opened up new areas to offshore drilling for the first time in decades when he lifted a longstanding moratorium on new drilling off much of the nation’s coasts. 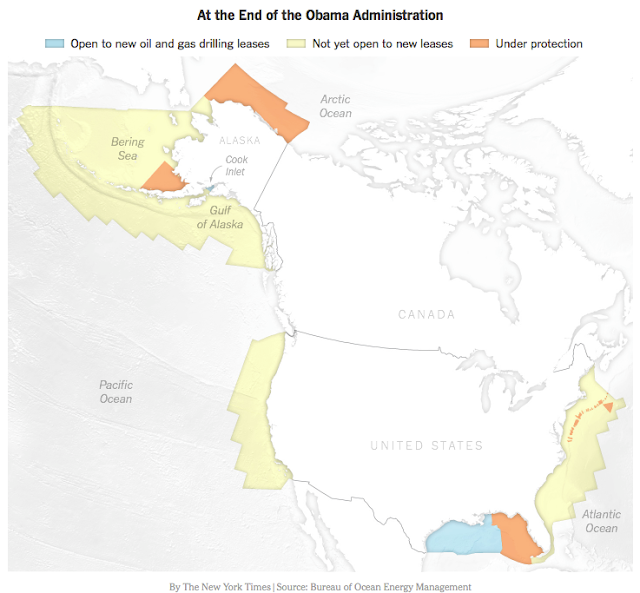 At the same time, a bill passed by Congress in 2006 allowed new drilling in some parts of the Gulf of Mexico but banned drilling in most of the eastern Gulf until 2022.

Much to the chagrin of environmental groups, the Obama administration initially said it would also expand offshore drilling and allow new leases off the Atlantic coastline, parts of the Gulf and the north coast of Alaska.
However, the 2010 Deepwater Horizon oil rig disaster, which killed 11 people and caused the worst-ever oil spill in American waters, triggered a reversal of Mr. Obama’s plans.

In the final weeks of his administration, Mr. Obama called for what he described as a permanent ban on offshore oil and gas drilling along wide areas of the Arctic and the Atlantic Seaboard, a move meant to bolster his environmental legacy. 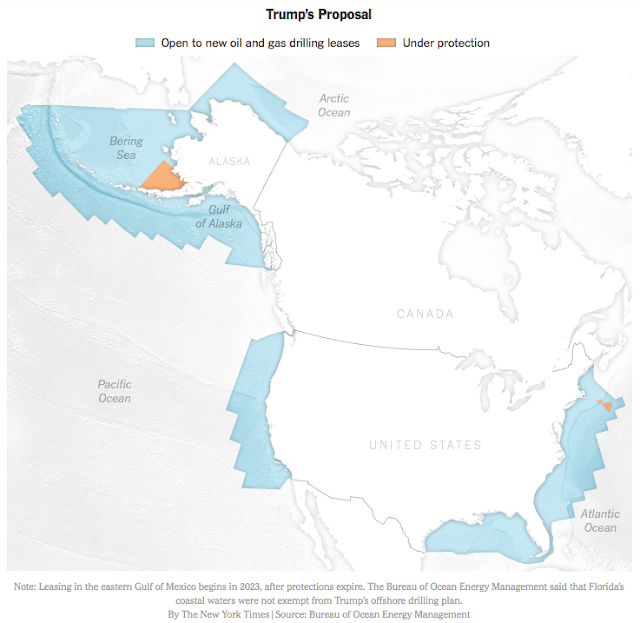 Under its new plan, the Interior Department would open 25 of 26 regions of the outer continental shelf to drilling.
That would leave only the North Aleutian Basin, the traditional territory of many Native Alaskans and home to one of the world’s biggest salmon runs, off limits to drilling.

The eastern Gulf would also remain out of bounds until 2022 because of the 2006 moratorium. But after that it, too, could be opened to drilling under the Trump plan.

Separately, drilling is banned within about 600,000 square miles of marine and Great Lakes waters designated as marine sanctuaries or monuments. 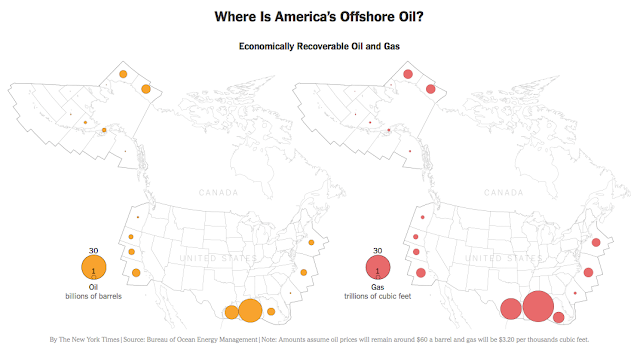 Just how much oil lies off America’s coasts, and how much drilling could actually happen?

The Bureau of Ocean Energy Management, which manages offshore leasing, estimates that the areas opened up to drilling under Mr. Trump’s plan hold nearly 45 billion barrels of oil, of which 21 billion barrels would be economically recoverable assuming oil prices remain around $60 a barrel.
(To put that in perspective, since 1970, the western and central zones of the Gulf have yielded about 14.5 billion barrels of oil.)

While those are large amounts, there are significant oil reserves still to be found in the western and central Gulf, which are already open to drilling.
There, some 45 billion barrels of oil reserves are up for grabs, of which 37 billion barrels could be produced economically at current oil prices.

Stated another way: Almost two-thirds of the nation’s oil reserves that companies can hope to drill for while still turning a profit lie in seas already open to drilling.
Meanwhile, there’s little recoverable oil and gas in the South Atlantic or the Straits of Florida, or off the Washington and Oregon coast, or off Alaska outside the north shore.

The abundance of cheap oil and gas from onshore fracking in the United States has already diminished the incentive for companies to go drill in new offshore zones.
Given the risks and costs of building wells in seas that have seen little development to date, not to mention the possibility that a new administration could again change offshore policy down the road, analysts don’t expect a rush into newly opened waters soon.