Could cities profit from protecting themselves against rising seas? 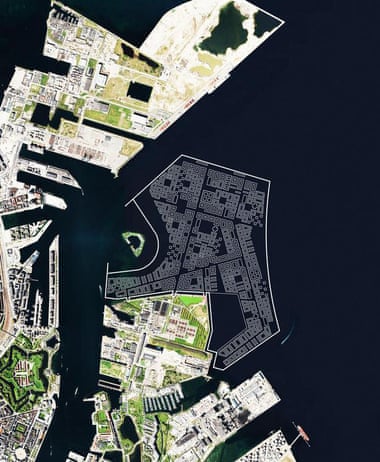 The original plans for Lynetteholm’s position in Copenhagen harbour. 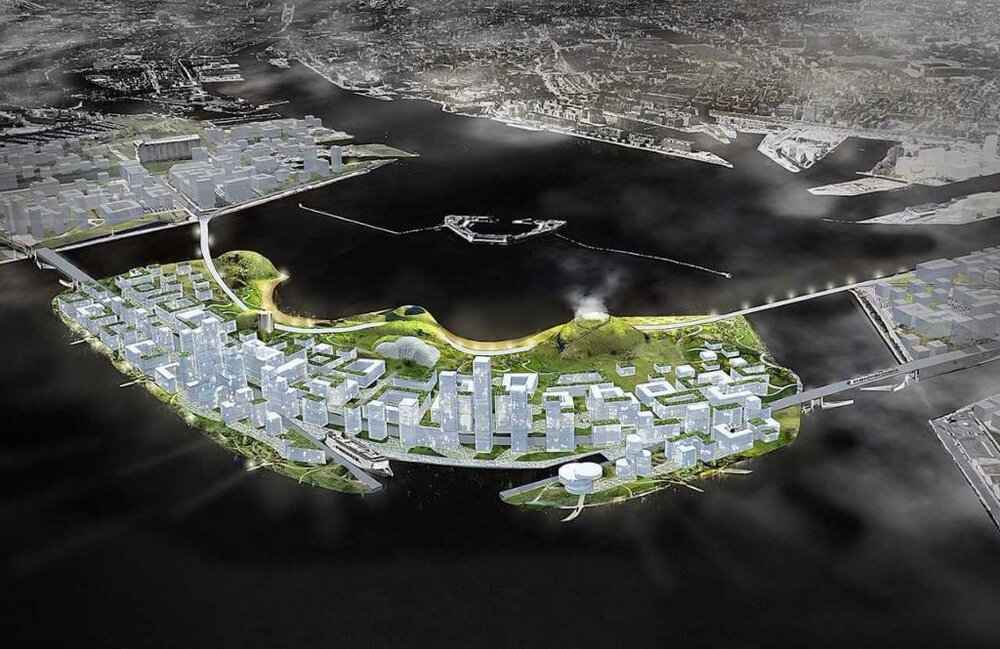 A bigger island, further from the Trekroner Fort was announced in August 2019.
Illustration: Danish Ministry of Transport and Housing 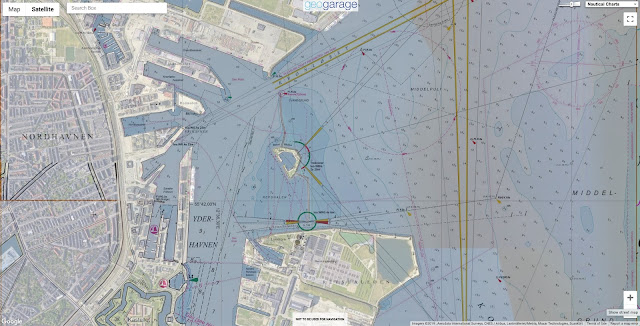 From The Guardian by Richard Orange

Some coastal cities are reclaiming land as a barrier against rising water – then selling it off.
But critics argue that climate change defence should not be a business model

“The island is going to be placed where the British empire’s fleet once was,” says Anne Skovbro, looking out from her office in a 19th-century customs house over Copenhagen’s harbour.

She points out the mooring posts where tall ships once docked, the old masting crane that marked the harbour’s outer edge, and the patch of sea where Horatio Nelson is supposed to have held a telescope to his blind eye as his ships set the city’s medieval centre ablaze.

The planned island to which she is referring, Lynetteholm, is perhaps the most developed expression of an idea that is spreading across the world: protecting cities from rising seas by reclaiming land – and paying for it by selling the new land off.

The island, more accurately described as a peninsula, will stretch across the mouth of Copenhagen’s harbour entrance, leaving only a channel for ferries and cruise ships that could be closed off in cases of storm surges.

The reason the idea works (and the reason it can’t be repeated in many other cities) is that the harbour is formed by a narrowish channel between the island of Amager and the mainland.
There is already flood protection along the inner coast of Amager, and the southern entry to the harbour is narrow and easy to close off.
The Öresund Strait also has a very small tidal range.

The island and sluice should therefore protect against storm surges for decades.
Once the sea level rises to the height of the waterfront in the inner harbour, the sluice would need to be replaced by a lock system.

As well as hopefully obviating the need for grim concrete sea walls like those erected around New Orleans after Hurricane Katrina, new islands like these mean new real estate.
In Copenhagen the rim of the island facing out to sea will have a soft edge for beaches, parks and wetlands; then, beyond a high protective mound, there will be space for 35,000 houses and a similar number of workplaces. 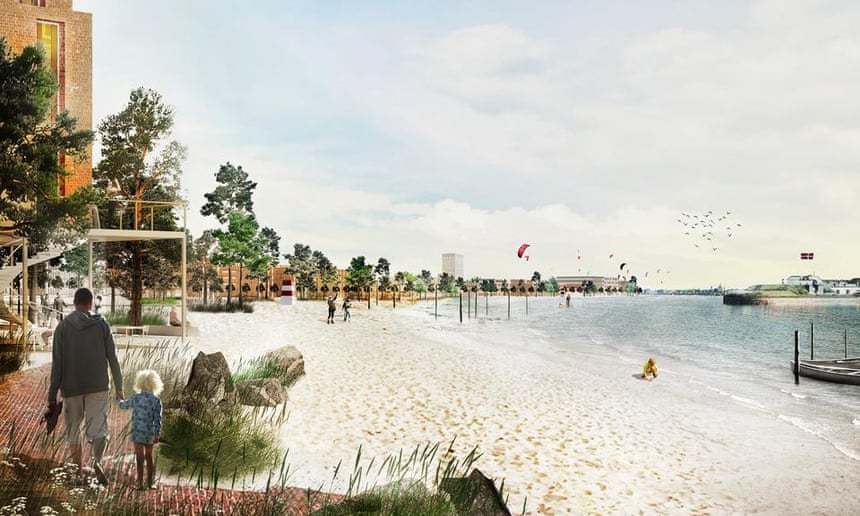 An artist’s impression of how Lynetteholm would have looked based on the first proposals in 2018. Illustration: Danish Ministry of Transport and Housing

When the project was announced a year ago, Denmark’s then housing minister, Ole Birk Olesen, boasted that the protection from sea-level rise would come for free.

“It will cost around zero kroner,” he declared.
“We will receive payment for disposing of the waste earth.
In addition, we will get a free island which we can sell the land from.
Selling the land will then finance a sea tunnel.”

Since the island expanded from 190 hectares (470 acres) to 282 this August, the financial case has become stronger still.
Whereas building a sea dyke to protect Copenhagen would have cost 750m Danish kroner (£87m), the city government estimates that building the island could yield a profit of 2.7bn kroner, simply from selling the earth.

The idea that protecting against climate change could actually be profitable has motivated many other cities to explore similar ideas.
Just down the Copenhagen harbour at the Danish Architecture Centre, Bjarke Ingels Group is exhibiting its bold vision of a reimagined New York City coastline.

Laid out on tabletops is a model of Manhattan, its waterfront embellished with new parks and solar-powered high-rise buildings.
Monitors flash images of devastation from Hurricane Sandy.

“We are basically proposing to expand Manhattan a little bit into the Hudson River and make a few new neighbourhoods that are going to create so much value that we can actually finance the parks on the waterfront,” Ingels told the Venice Biennale last year. 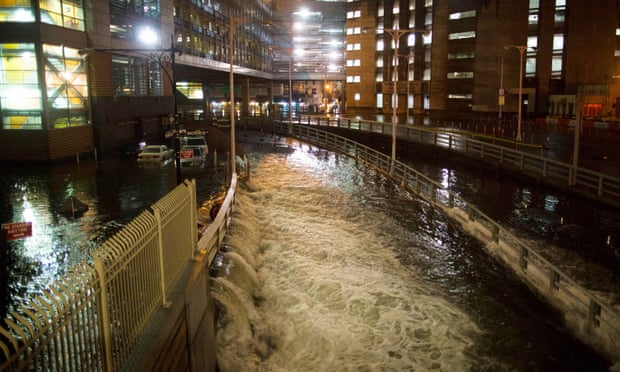 Seawater floods the entrance to the Brooklyn battery tunnel during Hurricane Sandy in 2012.
Photograph: John Minchillo/AP

The idea was backed in March by New York City’s mayor, Bill de Blasio, who announced $10bn for expanding the coastline as far as 150 metres.
“If there’s not federal money in play, we have to get some private money into it, and there has to be some development,” he said.

Meanwhile, Singapore’s prime minister, Lee Hsien Loong, faced with the estimated S$100bn (£58bn) cost of combating rising sea levels over the coming century, proposed to reclaim a chain of new islands along the city state’s south-east coast, or else construct a series of Dutch-style polders.

“You not only protect existing low-lying areas, but you extend out and create more land reclaimed from the sea, which we can use for housing and other valuable purposes,” he said in his annual speech to the nation, arguing that the new land would help offset the expense.

Jakarta has also floated a new scheme to protect itself from rising waters, a particularly urgent requirement given that the Indonesian capital is also physically sinking.
The plan is a less ambitious version of the much-criticised Great Garuda project: the city would reclaim no less than 2,000 hectares of land along the coast, and sell it to help pay to build a 20km sea dyke at an estimated cost of $18bn (£14bn).
With 40% of the city already below sea level, and some areas sinking by 25cm a year, there’s little time for delay. 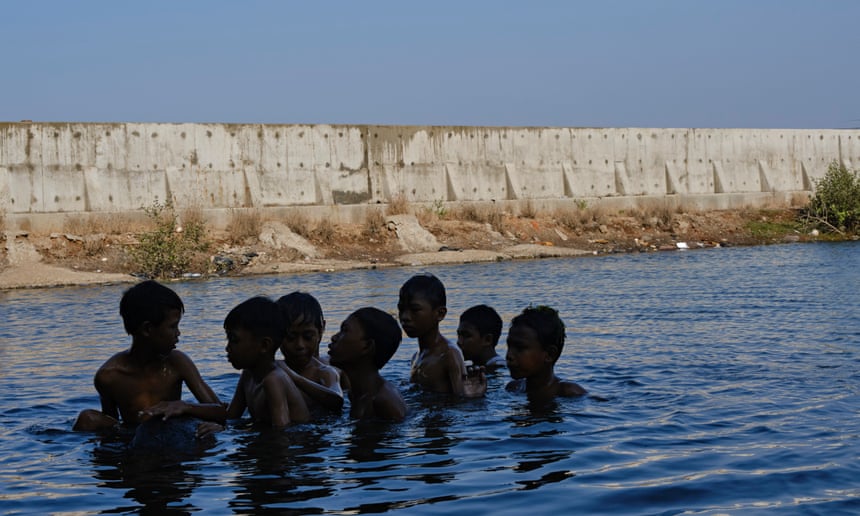 Boys swim in floodwater on the land side of a recently built seawall in Jakarta, Indonesia. Photograph: Ed Wray/Getty Images

The Dutch, global experts on protecting low-lying land from the sea, are doing the same.
When the Rijnland water board constructed a sea dyke along the coast of Katwijk in 2013, it combined the project with an underground car park for 650 cars.
Advertisement

“It’s not only a dyke, it’s a dune that creates a nice ecosystem, it’s great for tourism and it’s the first dyke on earth that actually generates revenues, because it sells parking tickets,” Piet Dircke of Arcadis, the engineering firm that worked on the project.

Not everyone is convinced, however.
Ahmed Aboutaleb, the mayor of Rotterdam, a city widely considered one of the leaders in climate mitigation, just shakes his head.

In the Netherlands, he asserts, no one resents paying taxes towards protection from the sea. 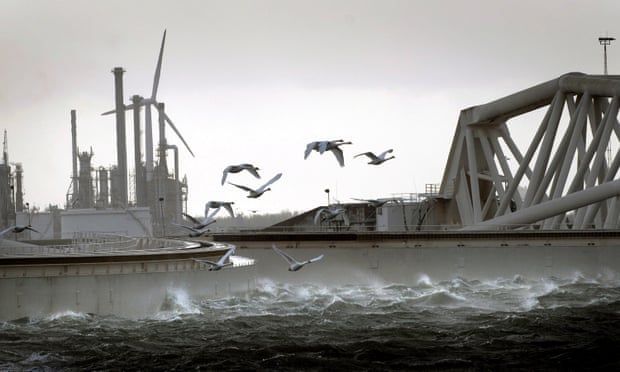 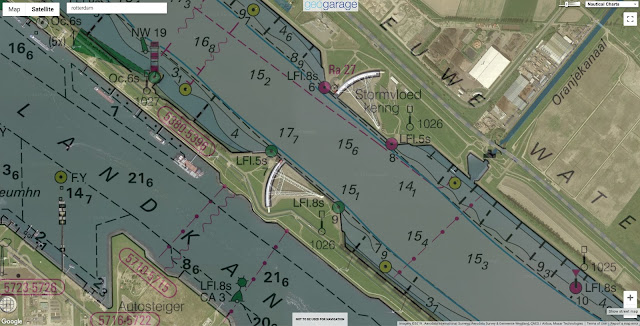 “I think the national investment in reinforcing dykes and levees is now €1bn [£860,000] a year, and it happens in the parliament without a debate – with a hammer.”

Henk Ovink, the Dutch government’s special envoy for international water affairs, is also wary of the idea that cities can get their climate defences for free.

“I’m always a little bit careful, because all of a sudden everything has to have a business case, and you don’t need any taxpayer dollar at all,” he says.

Ovink, a globetrotting salesman promoting Dutch water expertise, is an evangelist for publicly funding flood defences, as the Dutch have done since at least the 13th century when farmers grouped together to form the first waterschappen (water boards).

‘No life or body’

Similar criticism has been levelled at Copenhagen’s plans, with some architects complaining the idea is about little more than generating revenues.

“It’s just an engineering project, it has no life or body, it’s simply a study in how you can earn money,” says Eva Sara Rasmussen, founder of NaTour, a climate-focused landscape architecture and urban planning firm.
“This proposal has not been touched by either God or nature, or by any kind of aesthetic person.”

Earlier proposals had a hard coastline facing the sea and beaches on the sheltered side, something water specialists pointed out repeated mistakes made in land reclamation projects in Dubai and elsewhere. 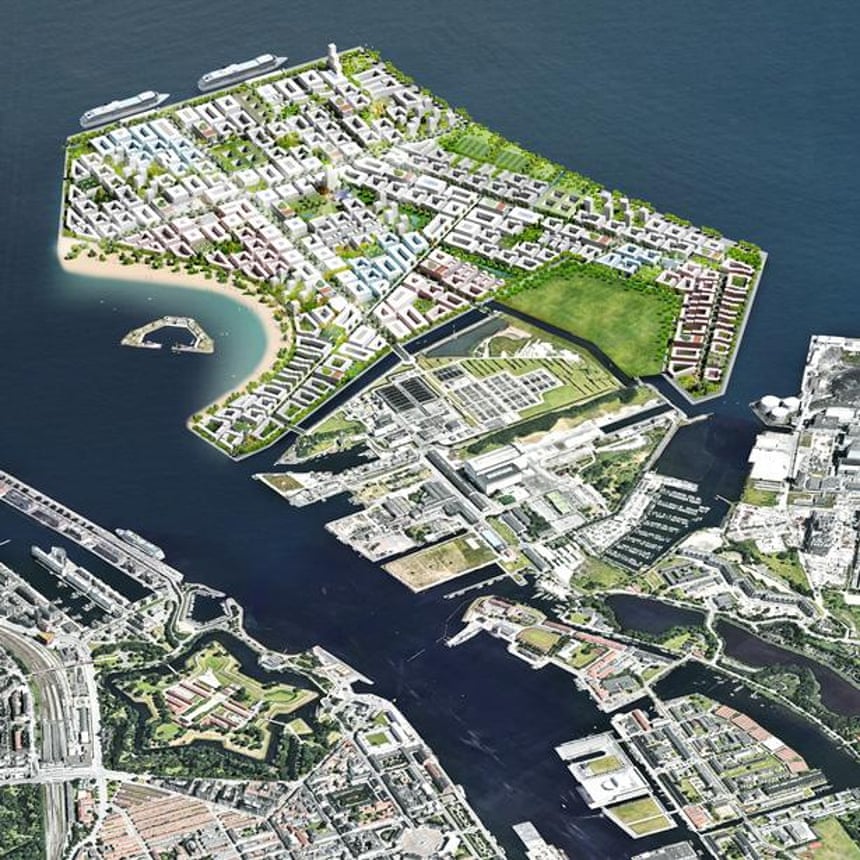 The original plans for Lynetteholm.Illustration: Danish Ministry of Transport and Housing

“The beaches need to be facing the waves.
It’s the waves or the currents which determine whether it will be a nice beach or not,” says Jacob Høst-Madsen, chief operating officer of DHI, the Danish water engineering firm now hired to work on the project.

“If you look at The World or The Palm [uncompleted artificial island projects off the coast of Dubai], and see what was supposed to be beaches and nice waters, you will see that it’s smelly and not something you would like to touch.”

The new plans are expected to work with nature, for example ensuring eel grass grows in the shallows.
However, with part of Lynetteholm sitting far out in a deep 16-metre channel, gentle sloping coastlines and attractive beaches or wetlands will be difficult to achieve, if not impossible, Rasmussen argues.

Skovbro has little time for the critics.
If the city didn’t build an island, it would have to build an ugly dyke, she argues.

“If the water comes in here, it floods everything,” she says, sweeping her hand over a map of Copenhagen’s inner harbour and its landmark buildings: “The queen. The parliament. Everything.”

The geography of Copenhagen has always been formed by its defences, she says, pointing to the informal enclave of Christiania, the Tivoli Gardens and the Citadel, all of which began as a single ring of fortifications.
After Nelson burned much of the city’s medieval centre, the Danish parliament funded a second, outer ring.

Now, she says, it’s time for a third.
“Let’s make a new ring, a flood protection ring,” she says.
“In Danish, we call it a klimaring: a climate ring.”