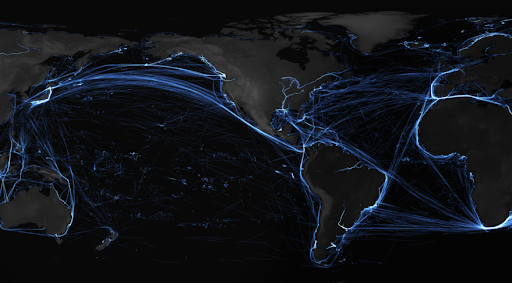 Spire tracks more than 75,000 ships per day now, and continues to build out its satellite and analytics infrastructure.
Credit: Spire

From SpaceNews by Caleb Henry

Spire is wading deeper into the ship-tracking business, challenging established competitors operating fleets of much bigger satellites.
The startup has come a long way since the crowdfunded launch of its first cubesat four years ago. Today, Spire’s constellation numbers 40 cubesats — with more on the way. As its fleet grows, so does its ambition.

The San Francisco-based company debuted two maritime products Aug. 29, a ship-tracking analytics platform called Sense Vessels, and a vessel-location forecaster called Predict, while making thinly veiled jabs at competitors Orbcomm, whose newly launched second-generation constellation has lost six out of 18 satellites, and exactEarth, which lost a satellite in April.
“Our customers have a diverse set of needs but almost all of them can be served by more and better data served with high reliability,” Kyle Brazil, Spire’s Sense product manager, said in an Aug. 29 statement.
“With many competitor’s aging satellite infrastructure increasingly failing, our strategy of launching a constantly upgraded constellation is proving to be a superior approach.”

It’s doubtful Orbcomm and exactEarth see their in-orbit assets as “aging satellite infrastructure.” Orbcomm’s OG2 satellites launched in 2014 and 2015, and exactEarth’s exactView system is mid-deployment — but Spire has established itself as meaningful competitive player.
The U.S. National Geospatial-Intelligence Agency is one of Spire’s customers.

Because of OG2’s unexpectedly high failure rate, Orbcomm is planning a third-generation supplementary satellite system while relying more heavily on partner Inmarsat of London to fill the gaps.
Orbcomm said Aug. 3 that its three most recent malfunctioning OG2 satellites are worth roughly $10 million each.
Note : Orbcomm did not respond to SpaceNews inquiries by press time.

In April, exactEarth received a nearly $2.7 million insurance payout for EV5, an AIS satellite from Fairfax, Virginia-based SpaceQuest that ceased communicating in February.
The satellite had launched in November 2013 on a Kosmotras Dnepr rocket.


This movie shows one month of AIS plots (20 million plots) as provided by Spire and visually analyzed by a LuciadLightspeed application.
The movie shows the vast amount of data instantly visualized, filtered, and analyzed at over 60 FPS on a desktop machine.
The data consists of a set of terrestrial AIS plots with detailed information in the San Francisco and Los Angeles harbors, conflated with a worldwide coverage of satellite AIS data.
The two data sets and the conflation happens on the fly in the model.
This meaning that the two files are merged into one model of 20 million plots, where the highlight of a single ship, highlights the tracks of both source data files.
(credit : Luciad)

Despite that setback, exactEarth has 65 hosted payloads launching on Iridium Next satellites, spokesperson Nicole Schill told SpaceNews Aug. 31.
From the two SpaceX Iridium Next launches completed, exactEarth has 13 hosted payloads in orbit, she said, nine of which are in service and four are drifting to their orbital planes.
The hosted payload constellation, operated by Harris Corp., will comprise exactEarth’s second-generation constellation.
The company has one more first-generation payload awaiting launch on the long-delayed PAZ satellite that investor Hisdesat of Spain recently shifted from Kosmotras to SpaceX. Schill said PAZ is expected to launch in December 2017; Kosmotras was originally to launch the satellite in 2014.
“Today the exactEarth/Harris alliance is operating the world’s highest performance satellite AIS system and this capability will get significantly better over the next year as the remainder of the Iridium NEXT constellation is deployed to complete the real-time exactViewRT system,” Peter Mabson, exactEarth CEO, told SpaceNews in an Aug. 30 email.
Schill said exactEarth’s total constellation will be over 70 AIS payloads by the end of 2018.

Spire spokesperson Nick Allain told SpaceNews Aug. 29 that Spire still intends to field 100 nanosatellites, but can’t give a date for completion due to the unpredictable nature of launch delays.

Launch delays will likely decide whether exactEarth or Spire control a larger AIS constellation.
Spire had projected in 2015 that by this year the company would operate 100 cubesats.
Last month’s Soyuz launch carried eight Spire satellites, one of which was placed in the wrong orbit.
“Our satellites now collect data from over 75 thousand unique ships each day,” said Spire CEO Peter Platzer said in an Aug. 29 statement.
“They’re tracked in a database of over 300 thousand ships that we keep tabs on, and we can predict where ships are going based on their past and present behavior.”

Spire, exactEarth and Orbcomm have all weathered launch delays that set back their constellation goals by at least a year or more.
Schill said the delays to Iridium Next were long enough to afford the company time to add more hosted payloads — the original number was 58, not 65.

Spire attributed its ability to launch the new maritime products to new satellites, ground stations and on-orbit upgrades, and said progress on these fronts will continue throughout this year and 2018, along with advancements in machine learning.
In addition to the 40 cubesats Spire operates today, Allain said the company has a network of 25 ground stations to downlink data, and is continuing to grow that number as well.