Nations will start talks to protect fish of the high seas

From NYTimes by Somini Sengupta

More than half of the world’s oceans belong to no one, which often makes their riches ripe for plunder.

Now, countries around the world have taken the first step to protect the precious resources of the high seas.
In late July, after two years of talks, diplomats at the United Nations recommended starting treaty negotiations to create marine protected areas in waters beyond national jurisdiction — and in turn, begin the high-stakes diplomatic jostling over how much to protect and how to enforce rules.
“The high seas are the biggest reserve of biodiversity on the planet,” Peter Thomson, the ambassador of Fiji and current president of the United Nations General Assembly, said in an interview after the negotiations.
“We can’t continue in an ungoverned way if we are concerned about protecting biodiversity and protecting marine life.”
Without a new international system to regulate all human activity on the high seas, those international waters remain “a pirate zone,” Mr. Thomson said.

Lofty ambitions, though, are likely to collide with hard-knuckled diplomatic bargaining.
Some countries resist the creation of a new governing body to regulate the high seas, arguing that existing regional organizations and rules are sufficient.
The commercial interests are powerful.
Russian and Norwegian vessels go to the high seas for krill fishing; Japanese and Chinese vessels go there for tuna. India and China are exploring the seabed in international waters for valuable minerals.
Many countries are loath to adopt new rules that would constrain them.

And so, the negotiations need to answer critical questions.
How will marine protected areas be chosen?
How much of the ocean will be set aside as sanctuaries?
Will extraction of all marine resources be prohibited from those reserves — as so-called no-take areas — or will some human activity be allowed?
Not least, how will the new reserve protections be enforced?

Russia, for instance, objected to using the phrase “long term” conservation efforts in the document that came out of the latest negotiations in July, instead preferring time-bound measures.
The Maldives, speaking for island nations, argued that new treaty negotiations were urgent to protect biodiversity.

Several countries, especially those that have made deals with their marine neighbors about what is allowed in their shared international waters, want regional fishing management bodies to take the lead in determining marine protected areas on the high seas.
Others say a patchwork of regional bodies, usually dominated by powerful countries, is insufficient, because they tend to agree only on the least restrictive standards.
(The United States Mission to the United Nations declined to comment.)

The new treaty negotiations could begin as early as 2018.
The General Assembly, made up of 193 countries, will ultimately make the decision.

A hint of the tough diplomacy that lies ahead came last year over the creation of the world’s largest marine protected area in the international waters of the Ross Sea.
Countries that belong to the Commission for the Conservation of Antarctic Marine Living Resources, a regional organization, agreed by consensus to designate a 600,000-square-mile area as a no-fishing zone.
It took months of pressure on Moscow, including an intervention by John F. Kerry, then the United States secretary of state.

The discussions around marine protected areas on the high seas may also offer the planet a way to guard against some of the effects of global warming.
There is growing scientific evidence that creating large, undisturbed sanctuaries can help marine ecosystems and coastal populations cope with climate change effects, like sea-level rise, more intense storms, shifts in the distribution of species and ocean acidification.

Not least, creating protected areas can also allow vulnerable species to spawn and migrate, including to areas where fishing is allowed.


For over 4000 years fishermen have been catching tuna during their migration through the Mediterranean. During the antiquity they were hailed as the "manna of the oceans".
We take a look at the long journey of the tuna to its mating grounds and witness their struggles including massive amounts of hunters and the strong presence of fishing boats.
Fishing on the high seas, often with generous government subsidies, is a multibillion-dollar industry, particularly for high-value fish like the Chilean sea bass and bluefin tuna served in luxury restaurants around the world.
Ending fishing in some vulnerable parts of the high seas is more likely to affect large, well-financed trawlers.
It is less likely to affect fishermen who do not have the resources to venture into the high seas, said Carl Gustaf Lundin, director of the global marine program at the International Union for Conservation of Nature.
In fact, Mr. Lundin said, marine reserves could help to restore dwindling fish stocks.
High-seas fishing is not nearly as productive as it used to be.
“It’s not worth the effort,” he said.
“We’ve knocked out most of the catches.”

Currently, a small but growing portion of the ocean is set aside as reserves.
Most of them have been designated by individual countries — the latest is off the coast of the Cook Islands, called Marae Moana — or as in the case of the Ross Sea, by groups of countries.
A treaty, if and when it goes into effect, would scale up those efforts: Advocates want 30 percent of the high seas to be set aside, while the United Nations development goals, which the nations of the world have already agreed to, propose to protect at least 10 percent of international waters 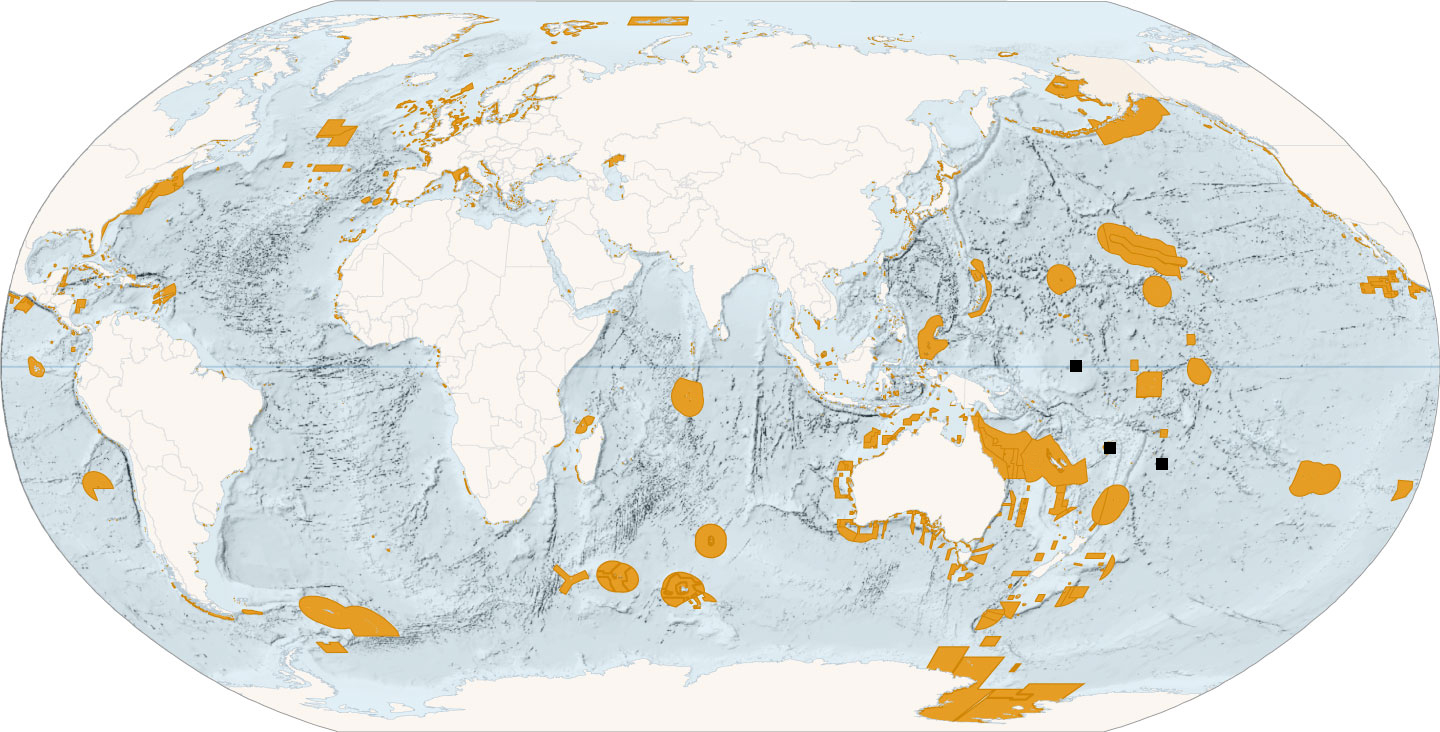 That patchwork, conservationists argue, has left the high seas open to pillage.
Enforcement is weak.
Elizabeth Wilson, a project director at the Pew Charitable Trusts, wrote in a recent paper that they “lack the coordination to protect and conserve their immense but fragile biodiversity.”
Pew offers a list of fragile high-seas ecosystems that should be protected.
At the top of the list is the Sargasso Sea in the middle of the Atlantic Ocean, which is under increasing pressure from fishing trawlers, Ms. Wilson writes, and home to 100 species of invertebrates, 280 species of fish and 23 types of birds.