The international body in charge of sea safety adopted measures on Friday to protect people and the environment during a predicted shipping rush in the Arctic.
But environment groups and insurers said the International Maritime Organisation (IMO) Maritime Safety Committee had failed to address key issues including a proposed ban on heavy fuel oil and how to safeguard against cowboy operators.

The committee, which met in London this week, signed off on the Polar Code and various amendments to the Safety of Life at Sea (Solas) convention.
These changes, which include mandatory requirements for ship design, crew training and search and rescue protocols, are expected to be ratified by the full IMO next year and come into force in 2017.
Melting sea ice due to global warming and pressure to cut costs makes the Arctic commercially enticing to shipping companies who want to avoid the circuitous, pirate-ridden voyage from China to Europe via the Suez Canal. Tourism, fishing and fossil fuel operations are also looking toward one of the world’s most fragile and extreme environments. 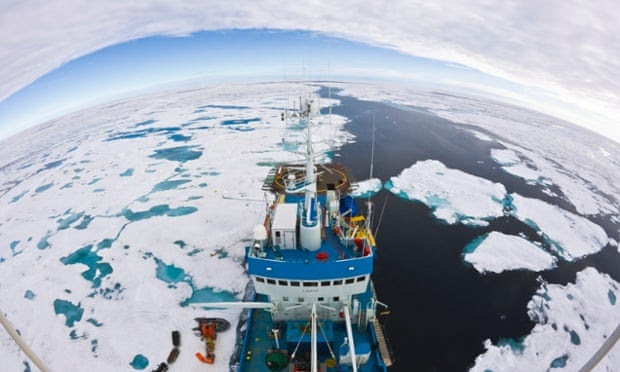 As more ships navigate the Northern Sea Route the likelihood of something going wrong in such a fragile and extreme environment increases.
Photograph: Jenny E. Ross/Jenny E. Ross/Corbis

Evan Bloom, director of the US State Department’s Office of Ocean and Polar Affairs said: “More and more people are going to be in the Arctic for one reason or another. In the future there may be [more] fishing vessels... There will be more and more tourism. There will be more and more commerce.”
He says this increases the likelihood of something going wrong in a region where there is currently very little capability to respond in either a search and rescue or environmental clean-up capacity.
Just four ships navigated the Northern Sea Route over Russia in 2010, but by 2013 the number had reached 71.
This summer saw relatively heavy ice cover in the Arctic, causing numbers to drop.
But the long-term trend is towards greatly expanded shipping across the northern extremes of Russia, Canada and even straight across the North Pole.

Sven Gerhard, head of hull and marine liabilities for Allianz said these predictions may be exagerrated.
But there are going to be more shipping accidents in the Arctic.
The new Polar Code will require ships to develop a Polar Operations Manual (POM) for each voyage, which is then reviewed and approved within the flag state.
But cutting corners is tempting as the costs of ice-strengthening ships and training expert ice navigators are very large.
There are some flag states insurers will not work with because they are seen as reckless.
“The safety net is only as good as the POM and the POM is only as good as how it is enforced by the flag state. There are many who have both eyes closed,” said Gerhard.
“It’s good to have a framework,” said WWF marine manager Simon Walmsley.
“But how can you guarantee that those rules are adhered to?
The risk is absolutely huge. One oil spill of a decent size will knock out so much in the Arctic. If you have a heavy fuel oil spill there are no recognised methods to clean under ice or during 24 hours of darkness. There is no response.”