From CBSnews by William Harwood

A United Launch Alliance Atlas 5 rocket is set for blastoff Friday carrying a sophisticated commercial imaging/surveillance satellite featuring a large telescope capable of resolving features on the ground just a bit larger than a football.

Owned by DigitalGlobe, the WorldView-4 satellite will work with others in the company’s fleet to provide detailed, repeated coverage of global hot spots, natural disasters and other areas of interest to the U.S. government and allied agencies.
“WorldView-4 is primarily targeted at our international defense and intelligence customers first and foremost, who are U.S. allies,” Jeffrey Tarr, DigitalGlobe’s CEO, told CBS News in a telephone interview.
“But what we’ve found is there’s increasing interest in very high-resolution imagery over, for example, the world’s major (cities). With this additional capacity, we’ll be able to image and update those metros on a more frequent basis, and we believe that will also unlock new applications and new opportunities.”

The Atlas 5 is scheduled for liftoff from Space Launch Complex 3 at Vandenberg Air Force Base, Calif., at 2:30 p.m. EDT (GMT-4; 11:30 a.m. local time), the opening of a 14-minute launch window. Forecasters are predicting an 80 percent chance of good weather.
Flying away to the south over the Pacific Ocean, the Atlas 5 will boost the satellite into an eventual 383-mile-high orbit around Earth’s poles.
Such polar orbits are favored by weather satellites, commercial imaging spacecraft and military spycraft because they are able to pass over every point on the globe as the world rotates below.

Built by Lockheed Martin, WorldView-4 features a powerful camera system provided by Harris Corp. that includes a powerful telescope with a 3.6-foot-wide mirror.
The camera will have a maximum resolution of just 11.8 inches, similar to the capabilities of DigitalGlobe’s WorldView-3, launched by an Atlas 5 in 2014. 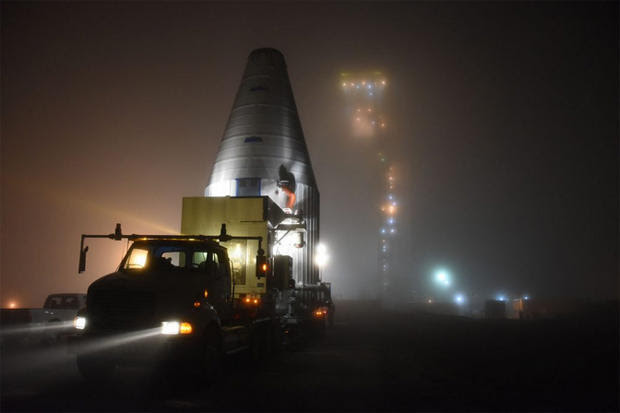 The WorldView-4 satellite, mounted inside a protective nose cone fairing, is hauled to a foggy Vandenberg Air Force Base, Calif., launch pad on Sept. 7 to await liftoff Friday.

About the size of an SUV, WorldView-4 is capable of imaging 262,000 square miles per day, storing up to 3.2 terabytes of data on board for transmission to ground stations around the world.
“It’s a huge amount of data,” Tarr said.
“Moving the data around the globe is non trivial. We’re storing a lot of imagery on the satellites, we’re moving it down about every 22 minutes, because approximately every 22 minutes the satellite is over one of our ground stations somewhere in the world.
“We then move (the data) to Colorado where we process it, and then we move it back out to our customers wherever they are in the world. And we do that in timeframes that are between 11 minutes and two hours.”

How big is WorldView-4?
Big. About the size of the Chevy Suburban, excluding the solar arrays.
But why is it so big?
The satellite’s telescope accounts for more than two thirds of its total size.
While modern electronics have decreased the size and cost of satellite components like onboard processors, radios, and digital storage, there is no way to reduce the size of the telescope without degrading the resolution of its images, simply due to the laws of physics.

WorldView-4 was originally built for GeoEye Inc., which had planned to launch it in 2014.
But after the merger of GeoEye and DigitalGlobe in 2013, the fully assembled, tested and renamed satellite was put into storage.
Tarr said increasing demand, prompted in part by the easing of government restrictions on commercial space imagery resolution, prompted a decision to get WorldView-4 into orbit as soon as possible.
“There was a significant change to the regulations about two years ago that relaxed what are called resolution restrictions from 50-centimeter (19.7-inch) imagery to 25-centimeter (9.8-inch) imagery. So that freed us up to make the full capabilities of WorldView-3 and soon, WorldView-4, available to customers.”

He said the relaxed restrictions on resolution allowed WorldView-3 “to bring to market for the first time this ultra-high-resolution imagery.”
“And what we found is that there is a demand out there that we’ve been unable to meet with just WorldView-3, especially over the most volatile parts of the world,” Tarr said. “We lined up a group of customers ... to purchase the capacity of WorldView-4.”

He said DigitalGlobe also is working to develop and launch a fleet of smaller satellites starting around the end of 2018 “that will enhance our capabilities by allowing us to essentially image areas of interest on the globe with more frequency. ... They’ll see something on the ground, might not be able to quite make out what it is, but then we’ll zoom in with our higher-resolutions satellites and image more closely.”
“If it turns out to be something we want to track frequently, then we’ll use the entire constellation, including the small satellites and the higher-resolution satellites, to monitor and track whatever that object or area of interest is.”

WorldView-4 has an expected lifetime of about 10 years.
Tarr said DigitalGlobe is in the early phases of designing a next-generation system that will enable much more rapid revisits to areas of interest.