With iPhones and computer models, do we still need weather forecasters?

This graph shows computer power and time versus model accuracy as defined by the S1 score (a measure of the skill of the forecast) of 36- and 72-hour NCEP 500-millibar forecasts.

As automation continues to claim jobs in new fields, meteorology may be next.

As the 10pm newscast drew near one night last month, the chief meteorologist of Birmingham's ABC-affiliate began to get worked up.
Balding and characteristically attired in suspenders, James Spann is one of the most recognizable and respected local TV meteorologists in the country.
But he had a familiar problem.
The day had been pleasant in Alabama, and more of the same temperate spring weather lay ahead—so what the heck was he going to talk about?

“I’ve got 2 minutes and 30 seconds to fill,” Spann explained.
“Everyone in my audience is going to know what the weather is going to do.
Except maybe my mom.
She’s 85 years old.
But most everybody has looked on their phone or some other device already.
So what am I going to do? Am I just going to rehash everything they already know?”

Many forecasters have been asking themselves this question lately.
Two technologies have converged to rapidly displace the primary function of meteorologists.
First are computers that are generally better forecasters than humans.
For most types of weather, numerical weather prediction has superseded human forecast methods.
And secondly, thanks to the Internet and increasingly ubiquitous weather apps on mobile devices, people have continuous, immediate access to 5-day, 7-day or 10-day forecasts.
As technology drives automation and machines take job after job once performed by humans, are meteorologists next in line?

Meteorology, as a science, only became possible about a century ago after a succession of physicists worked out the basics of thermodynamics in the 1700s and 1800s.
American meteorologist Cleveland Abbe is credited with making the observation around 1890 that “meteorology is essentially the application of hydrodynamics and thermodynamics to the atmosphere.”

Early in the 20th century, Norwegian physicist Vilhelm Bjerknes devised a two-step process for forecasting.
First he would make observations of existing weather conditions, and then he used the laws of motion to calculate how those conditions might change over time.
According to Peter Lynch, who wrote about this early history for the Journal of Computational Physics, Bjerknes considered seven basic variables when understanding weather: pressure, temperature, density, humidity, and three components of atmospheric motion.
He then identified seven independent equations, including the three hydrodynamic equations of motion, to solve for future conditions.

Bjerknes's brilliant ideas form the cornerstone of modern meteorology.
Unfortunately, they're completely impractical.
In his day there were few surface-level observations, fewer observations above the surface, and almost no information about the atmosphere over the oceans or unpopulated areas.
Moreover, there existed no efficient means of collecting or sharing what few observations did exist.
Even if Bjerknes had some data, there were no calculators or computers to help solve the complicated equations he found to govern atmospheric motion.

Glen Beck (background) and Betty Snyder (foreground) program the ENIAC computer.
It was used for weather forecasting in the early 1950s.

All that began to change in the 1940s and 1950s when computer scientists like John von Neumann and meteorologists like Jule Charney worked together to apply computer science to forecasting.
They ran simplified calculations on the first electronic, general-purpose computer, the ENIAC machine in Maryland.
Eventually, they succeeded in making 24-hour forecasts that showed some accuracy.
Alas, it also took about 24 hours to churn through those calculations, so computer models at the time were only able to keep pace with the weather.

As computer processing power has increased in the decades since, so too has the ability of physicists and meteorologists to accurately model the atmosphere.
Primitive equations have given way to the ability to solve the full set of equations Bjerknes proposed, all around the world, at all levels of the atmosphere.
There has been a similar revolution in data gathering for initial conditions.
Whereas Bjerknes could only rely on local observations, today twice-daily balloon soundings, sensors attached to aircraft, and satellites all feed near real-time data about the entire atmosphere into the global models.

Numerical weather prediction improved dramatically, especially since the 1970s.
An analysis in Nature, published in 2015, found that forecast skill in the 3- to 10- day range has increased by about one day per decade.
That is, a 6-day forecast today is as accurate as a 5-day forecast a decade ago.
And this improvement shows no sign of slowing down.


MetEye is a fantastic tool for getting your local weather, giving the latest weather and forecasts out to 7 days ahead, for any location.
It is a graphical forecasting viewer which gives seven day forecasts, satellite and radar imagery and almost real time information on temperature, rainfall, cloud cover, humidity and wind speed.

In October 2015, IBM announced that as part of a $2 billion deal it would acquire most of The Weather Company.
IBM planned to pair its artificial intelligence business, Watson, with the vast weather data repository of The Weather Company.
The deal excluded The Weather Channel television network.
For now, IBM is betting on an almost purely digital future for forecasting—not good news for someone like James Spann.

Mary Glackin, a former senior official at the US Commerce department who joined IBM in 2015 as a senior vice president, described the acquisition of The Weather Company as a “bellwether” in the field of meteorology.
The deal, she said in an interview with Ars, reflects the increased skill in computer model forecasting.
It also speaks to how applicable weather and climate forecasts are to corporate interests.

IBM intends to build its business around enhancing decision making, serving as a bridge between the forecast and the decision maker.
“Everybody is walking around with a forecast in their pocket, on their cell phone,” Glackin said.
“The Weather Company will continue to distinguish itself by having the best forecast, but really our push is ensuring effective decision making, and we’re going to get there through data analytics.”

Traditionally forecasts have been made by a meteorologist who collects the output from one or more forecast models and then distills that information into a forecast for grid points across a certain area.
The traditional example would account for temperature, winds, and chance of precipitation at each of the airports in a major metro area.
This process was limited by how often a forecaster could update the grids, but this job of making 5- and 7-day forecasts is now going away. 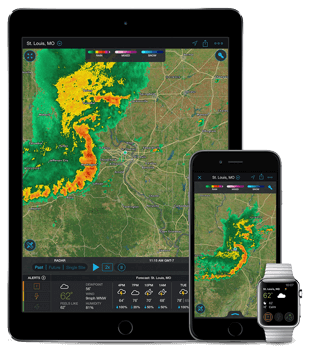 The automation of this process has been driven both by increased computing power and mobile devices.
Better computer hardware has allowed forecast models to run at higher resolutions, which means that the model has more grid point outputs.
So instead of a handful of points in a large city, a model may have dozens of grid points across a metro area.
Weather apps have taken advantage of these higher resolution models to offer more localized forecasts for “your backyard.” Increasingly, then, a human forecaster might have some top-level input into such forecasts today, perhaps weighing the European model more heavily than the US Global Forecasting system.
But this new role largely removes the human element from the forecast loop.

IBM envisions even this limited role going away.
Peter Neilley, a former US government scientist who now operates The Weather Company’s global forecasting operations, told Ars this “marginal revolution” toward machines would continue in meteorology.
“The computers fundamentally are the best forecasters we have, and as a result meteorologists are becoming more interpreters of the information, helping people make more effective decisions at the consumer level, such as go to the basement now or go buy a snow shovel now,” Neilley said.

From IBM’s perspective, humans will continue to be pushed out at both the consumer and business level.
Computers will learn to interpret information, too, and provide guidance on activities.
The role of humans will evolve into ever more complex decisions that require multiple sources or types of information, such as when it is prudent to order the evacuation of New Orleans in the face of a Gulf of Mexico hurricane.
Complex decisions will incorporate both weather forecasts (made by the National Hurricane Center, but based almost entirely on computer model guidance) and human factors, such as how many buses are available and how long historical evacuations have taken.
“There’s no doubt that the trend in the big picture is less of a pedigree on solely meteorology, and more of a pedigree on meteorology plus analytics or data sciences or other related areas,” Neilley said.
“That trend is pretty steep.” That trend is also reflected in The Weather Company’s employment.
In the part of the business that makes forecasts and produces them for customers, the employment ratio is about 4-to-1 non-meteorologists to meteorologists.
The company prizes data analytics over forecasting skill.

In the near future, Neilley said, the company will focus less on producing the standard 5- or 7-day forecast accessible on an iPhone and more on helping consumers make decisions such as whether they should, for example, cancel the family picnic this weekend or park the car in the garage tonight.
The company is moving toward allowing customers to interact directly with the data, such as signing up for an alert when the winds are going to exceed 15mph.