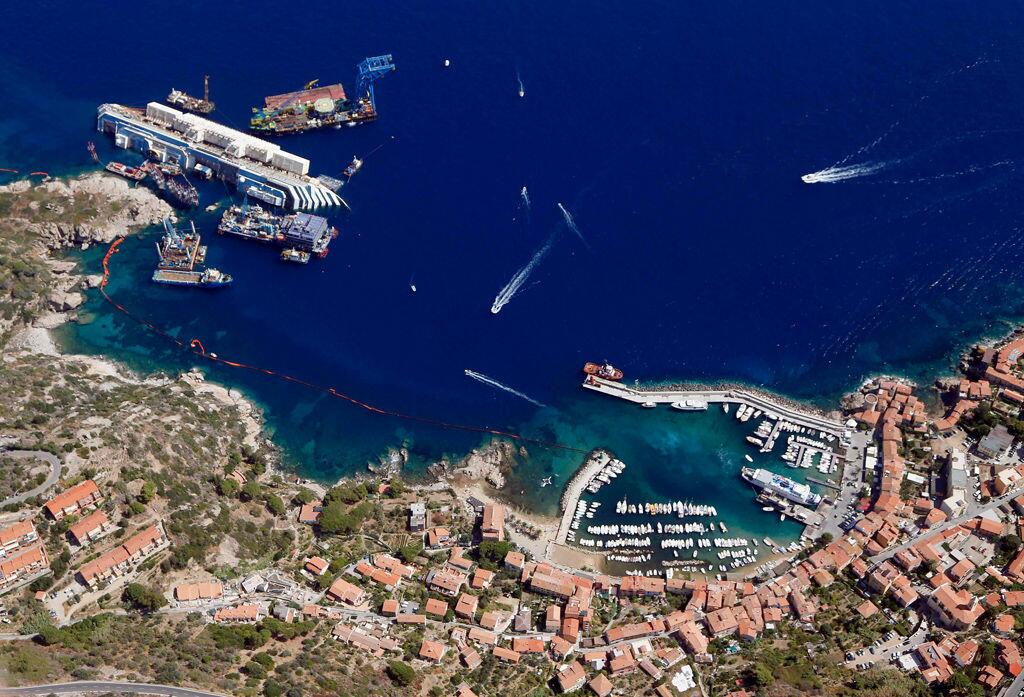 From NYTimes by Gaia Pianigiani

Engineers started refloating the deformed hull of the cruise liner Costa Concordia on Monday, a crucial step before its removal from the Tuscan island where it ran aground 30 months ago, taking 32 lives.

“It’s a paramount engineering attempt not just for Italy, but for the whole world,” said Emilio Campana, the director of the research office for naval and maritime engineering at Italy’s National Research Council.
“The first risk is that the vessel breaks apart as they lift it. Its structure is damaged and warped. It’s impossible to calculate exactly how it will react.”

The authorities said Monday that the first phase of the undertaking had been successful and that the ship was afloat for the first time since it hit a reef and capsized in early 2012, setting the stage for an operation unparalleled in the annals of marine salvage.


A timelapse video filmed on Monday (July 14) shows the first day of the historic salvage operation to move the wreck of the Costa Concordia.
Filmed from the start of the operation on Monday morning until nightfall, the video clearly picks up the small zigzag movements showing that the 114,500 tonne Concordia was moving away from the coastline of Giglio Island.

On Monday morning, the Italian authorities blocked the water and airspace around the island of Giglio, to ensure safety and prevent any interference with the refloating operation.
In the first six or seven hours of the operation, the wreck will be lifted about seven feet using a pneumatic system, detaching the hull from a platform built nearly 100 feet underwater.
The ship has been resting there since September, when engineers managed to right the ship in a spectacular 19-hour operation.

Nick Sloane, the senior salvage master for Titan Salvage, the American company in charge of the operation, said Monday that he was relieved the weather was cooperating after a night of light rain.
“Nervous? A little,” Mr. Sloane said to reporters on Giglio, according to the Italian news agency ANSA.
“Today we’ll find out if the calculations are right, or at least how distant they are from our predictions.”

Over the past few months, as the cost of the removal has swollen from the $300 million initially budgeted to more than $1 billion, workers have fitted 30 huge steel stabilizing containers, known as sponsons, on both sides of the Concordia that will function as floats.
As pneumatic devices gradually empty the sponsons of water and fill them with air on both sides, the hull will be lifted upward.

Over the next week, the ship will be raised deck by deck until only 50 feet remains submerged.
At that point, the Costa Concordia should be ready to be towed away by tugboats — two at the bow and two at the stern — for its final cruise of nearly 200 nautical miles to the port of Genoa.
“This operation will end only after the ship has been transported to Genoa,” warned Gian Luca Galletti, Italy’s environment minister. “We can’t let our guard down.”

An Italian official said on Sunday that once the ship is lifted, it will be thoroughly searched for the body of an Indian waiter, the only one of the 32 known fatalities from the accident that has not been recovered.

Further complicating the salvage operation is the potential for environmental damage, particularly the leakage of fuel oil.
“Of course we are worried about the refloating operation, as it is not entirely clear how possible leaks of the Concordia’s toxic liquids will be handled,” Alessandro Giannì, campaign director at Greenpeace Italy, said.
“But the weather conditions during the navigation are also a concern.”

After the ship leaves the Tuscan island, workers will begin the environmental recovery phase, which should last several months.
Under the current plan, salvage workers will attempt to clean the sea floor and replant the rare marine flora that attracted recreational divers.
It was still unclear whether the underwater platform would be left on the island’s sea bottom and used as a diving facility or would be removed.

The ship’s captain, Francesco Schettino, is facing trial on multiple charges of manslaughter, causing a shipwreck and abandoning the vessel before everyone had disembarked, and in recent months hundreds of witnesses have been giving testimony in court.
A company official and four crew members have pleaded guilty to reduced sentences.