Map room: Borders on top of the world

At 100 square miles, Petermann Ice Island was the largest piece of free-floating ice ever filmed
(and the second largest in recorded history).

From World Policy Institute (by Mark Terry and Adam Scholl)

Yes, the melting polar ice caps are opening up new transportation routes and revealing untapped mineral wealth that will benefit us all.
Uh, hold on, say Mark Terry and Adam Scholl.
They remind us that increased accessibility could well lead to overlapping and dangerous territorial claims.

A century ago, traversing the Northwest Passage was a grueling effort that often took years.
Explorers frequently perished as their boats sunk or got trapped in the abundant pack ice.
Today, these waters are mostly ice-free during the summer, and ships can sail through with ease.
The Arctic is warming twice as fast as the rest of the planet, while much of the Antarctic is warming three times as fast.
As a result, the amount of Arctic sea ice has shrunk dramatically, and last year’s extent was the lowest ever recorded.
In the last 30 years, the annual minimum size of the polar ice cap has shrunk by more than half, receding by 1.5 million square miles, an area approaching the size of India, France, and Italy combined.

Global Warming effects on the Arctic Ocean
The surface waters of a major portion of the Arctic Ocean are becoming saturated with carbon dioxide sooner than many scientists expected, all but halting the watery region's ability to sop up more of the greenhouse gas from Earth's atmosphere, new research finds.

This melting is occurring more rapidly than predicted and continues to accelerate.
Strikingly, between 2011 and 2012, the ice cap shrunk by 386,102 square miles, an area larger than Texas and Arizona combined, and according to Cambridge University professor Peter Wadhams, the entire Arctic ice cap could melt as soon as the summer of 2015.

In October 2010, I was the first filmmaker to cross the Northwest Passage via the seldom-navigated Prince of Wales Strait.
I sailed aboard the Canadian Coast Guard icebreaker Amundsen, named after Roald Amundsen, the famous Norwegian explorer who was the first man to navigate the passage successfully.
In 1903, his trip took three years. Since most of the water was completely ice-free, my trip took just three weeks.
Shockingly, it wasn’t until we reached the southern entrance of the Prince of Wales Strait, which historically has almost always been frozen solid, that we even began to see sea ice.
One obvious result of glacial melt is the rise in sea levels.
On one expedition, I captured the only footage of Petermann Ice Island, the second largest piece of free-floating ice in recorded history (and the largest piece ever filmed).
Carved from a massive glacier in Greenland, this chunk of ice—which, at 100 square miles, was five times the size of Manhattan—floated by, destined to dissolve in the sea.
The melting process triggers a vicious feedback loop at the poles, since open water absorbs more of the sun’s heat than ice.
As McGill University professor Bruno Tremblay explains, “You warm the surface ocean; you melt more ice; you melt more ice, you have more open water; more open water, more sunshine being absorbed; and you can actually lose a lot of ice very quickly.”
Ice melt may also release even more greenhouse gas into the atmosphere.
The Arctic Ocean contains more methane than the rest of the world’s oceans combined, and this gas is released as ice vanishes. Evidence of this phenomenon has already been observed.
Though scientists were mystified at first, they determined that a series of strange formations appearing on the floor of Hudson Bay—some 650 feet in diameter and 100 feet tall—are the result of enormous methane bubbles rising through the seabed. Considering that each pound of methane warms the climate 22 times more than a pound of carbon dioxide, these bubbles could amplify the greenhouse gas effect.
As the Northwest Passage becomes increasingly ice-free, it could replace the Panama Canal as the chief maritime conduit between Europe and Asia, between eastern North America and Asia, and between western North America and Europe, shortening each of these voyages by thousands of miles. Similarly, it could replace interstate highways and transcontinental railways as the primary shipping route between the North American coasts.
As more shippers use this shortcut, trade will become cheaper and faster.

Though the Northwest Passage has enormous economic value as a commercial route, the resources in the seabed below could prove even more lucrative.
According to a United States Geological Survey report, a quarter of the oil left on earth is in the Arctic, and of that, more than half lies beneath the waters of the Northwest Passage.
This section of sea floor, which until recently was inaccessible beneath the ice, contains abundant natural gas along with unconventional energy resources like shale gas, tar sands, and methane hydrates.

It is a trifle ironic that humans have gained access to these vast new oil reserves, at least in part, by burning so much oil from elsewhere that the polar ice caps started melting.
Now, all governments with Arctic borders are scrambling to claim a piece of this valuable hydrocarbon pie and are readjusting their frontiers.

According to international law, all states own any resources found within 200 nautical miles of their coast (unless another state is closer).
Most Arctic resources fall within these boundaries, so are uncontested, but even the resources outside these boundaries are worth potentially huge sums of money.
Six countries—the United States, Canada, Russia, Norway, Denmark, and Iceland—have made territorial claims to areas far from their coasts.
Some of these claims overlap.
To win Arctic sovereignty disputes, states must provide proof to the UN Commission on the Limits of the Continental Shelf that their continental shelf, and no one else’s, extends into the disputed area. Some governments have sent submarines deep underwater to prove these assertions.
Vladimir Putin had one crew use their submarine’s robotic claw to plant a Russian flag in the seafloor at the North Pole, prompting outrage from Canadian officials.
The UN commission is expected to resolve most of these disputes within a few years, though at least one may linger.
Since the Senate has not ratified the UN Convention on the Law of the Sea, the United States has no standing to prove some of its claims to Arctic territory and could lose them altogether. 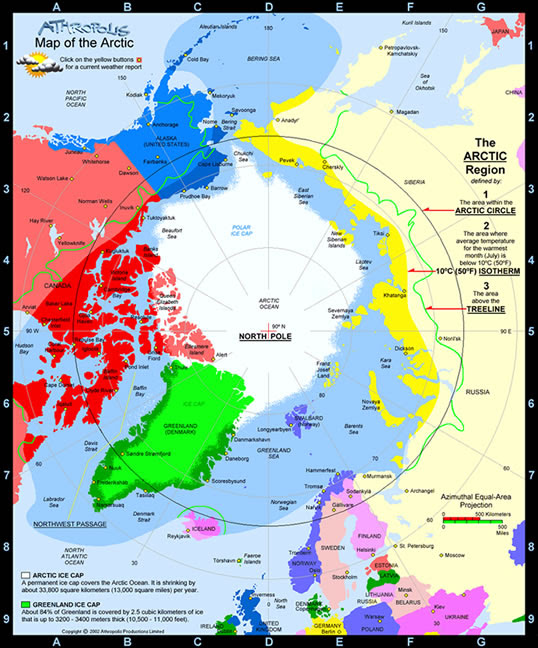 Map of the Arctic

We map the cap

On the following two pages, World Policy Journal maps the melting Arctic ice cap alongside the shipping lanes, oil basins, and land claims that are springing up in its wake.
This new northern frontier will have a transformative impact on politics, industry, and the environment, and governments and companies across the globe are racing to take advantage of its opportunities.
Perhaps it will be a boon for tourism, too.
After all, it may only be a few more years before you can go swimming at the North Pole—no visa required.