Our seas have become a plastic graveyard - but can technology turn the tide? 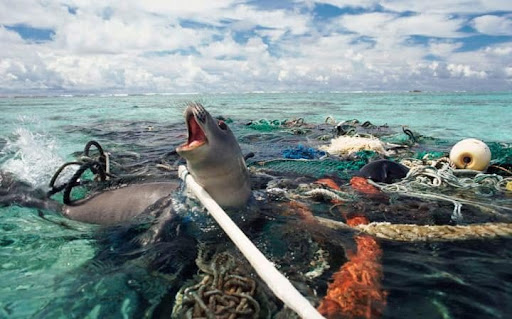 When strong winds prevented filmmaker Jo Ruxton from sending a submarine to her chosen recording location off the coast of Marseille, she was naturally nervous.
The crew had just one chance to document evidence of the build-up of rubbish on the seabed for her award-winning film A Plastic Ocean, but were forced to divert miles from where divers had reported a growing dump.
She needn’t have worried.
As the submersible reached a deep trench one mile from the surface, the team were confronted by a junk yard of human debris.
Tyres, plastic water bottles, synthetic netting, unexploded bombs and even an old parachute emerged from the gloom.
The world’s oceans are drowning in human rubbish.
Each year more than 300 million tons of plastic are produced globally, and 10 per cent will end up in the sea.
It is estimated that there is now a 1:2 ratio of plastic to plankton and, left unchecked, plastic will outweigh fish by 2050.
Not only is the floating haze of scum unsightly, it is also swallowed by marine animals that cannot digest it.
Chemicals leach into the water, and it has been shown that even humans who eat seafood ingest 11,000 pieces of microplastic each year.
Ruxton, who has previously worked as a producer on the BBC’s Blue Planet, said: “People watch wildlife documentaries and think the oceans are still pristine but they aren’t. I’ve known film crews spend two hours clearing up beaches before they can take shots of turtles.” There are thought to be three million pieces of microplastics in the world's oceans
Credit: Plastic Oceans Foundation

Yet there are signs that the tide may be starting to turn, and Britain could be leading the way.
In 2010, Warwick University announced it had developed a process of recycling all plastic waste.
The technique, called pyrolysis, "cracks" plastic into more basic molecules to form an oil called Plaxx, which can then be used as a fuel, or to make new plastic.
Warwick University spin-off company Recycling Technologies has just opened its first large plant in Swindon, Wiltshire, which operators say will process the plastic of the entire town.
The goal is to roll out similar plants across the world and even install small versions on board dredgers, which can trawl the water, sucking up plastic waste and turning it into fuel to power the ships.
Plastic is notoriously difficult to recycle - and only 12 per cent of household waste is reprocessed. The rest is either burnt or goes to landfill.
The new system aims to turn dumped plastic into a valuable commodity.
“This could really be a game-changing technology,” said Adrian Haworth, of Recycling Technologies.
“There is a worldwide need for it. Only a small amount of plastic is recycled - most ends up in landfill or in the ocean. We need to stop this happening in the first place.
“Eventually we hope to be able to mine landfill sites for plastic, and we’ve had a discussion with a dredging company, with the idea that they would collect the plastic in ports and turn it into fuel on board.” The US Navy has plasma torches on board to recycle waste

The US Navy and even some cruise ships already operate recycling systems, which take the waste of crew and passengers and heat it to temperatures of more than 5,000C to turn it back into a reusable form.
The plasma torch technology is powerful enough to convert plastics, metals and glass into granules or gas.
The Canadian company behind the system, called PyroGenesis, is planning plasma plants across the world, which could process up to 100 tonnes at a time.

A Dutch entrepreneur is also planning to deploy a pilot device off southern Japan that will, if all goes according to plan, gather and capture some of the millions of tons of plastic that is clogging up the world's oceans.
Some countries, such as Germany, have legislation over plastic.
Since 1991, companies that produce it have been responsible for dealing with their waste, and most supermarkets contain state-of-the art bottle banks that scan bar codes so packaging can be returned to manufacturers.

In 2013, David Katz, a social entrepreneur, founded The Plastic Bank in Lima, Peru, an organisation that pays locals in coastal communities for their plastic bottles, then recycles them, calling the result "social plastic".
Further banks have since been established in Haiti and are due to roll out globally.
The company has released the blueprints for its plastic recycling device so that others can follow suit.
Yet many experts believe that cultural change will have the biggest impact.

Since the 1950s, marketeers have been persuading consumers that plastic is a throwaway product.
One trillion plastic bags are produced globally every year, yet their average working lifespan is just 12 minutes.
“We are in a growing culture of throwaway living,” said Professor Richard Thompson, a global expert on ocean plastics from the University of Plymouth.
“There is an urgent need to recognise that there is no such place as away. Marine debris is damaging to the economy, to wildlife to the environment. It is wasteful and unnecessary, and we all agree that it needs to stop.” Ruxton, the producer of A Plastic Ocean, which has been described by Sir David Attenborough as "one of the most important films of our time", said: “It’s crazy how we believe that plastic just disintegrates, and it was because we were told in 1955 that we wouldn’t have to wash up any more.
“But we’re at a tipping point now, and if we don’t act, we won’t be able to go back. In the 1960s we were producing eight million tons of plastic a year. Now it 300 million, and where will we be in another 50 years?
“You go out now and look in the ocean and it is just so prolific. People need to realise that plastic is not disposable. We don’t need all this packaging.”


Musician Jack Johnson has released a 30-minute film called The Smog of the Sea.
It documents a week-long expedition that he and other ‘citizen scientists’ took through the Sargasso Sea of the North Atlantic, to explore the problem of plastic pollution in the ocean.
Guided by ocean researcher Marcus Erikson of 5 Gyres, the participants were stunned to learn that there’s no such thing as a giant floating garbage patch anywhere in the world.

Instead, plastic is everywhere, which is a far worse reality.
A recent study estimated that nine in 10 of the world’s seabirds have pieces of plastic in their guts.
The southern hemisphere, around New Zealand and Australia, is particularly badly affected because of major polluters such as Indonesia and Thailand.
Some albatross and shearwater have been found to have nearly 3,000 pieces of plastic - up to 8 kg - in their stomachs, the equivalent of a human eating 12 pizzas worth of food.
It can’t be digested, so the birds eventually die through lack of nutrition.
In countries such as Tuvalu, where plastic waste washes up by the ton onto shores, locals suspect links with fertility problems.

Professor Susan Jobling of Brunel University discovered that most plastics contain hormone-disrupting chemicals.
Some 92 per cent of adults in Western countries have plastic and chemicals from plastic production in their systems, and their children have twice as much.
"I hope it will make people really think about how they use plastics and make them wonder, for example, if they really need a plastic drinking straw or a single-use plastic bottle,” said Prof Jobling. There are even worries that what is visible could be just the tip of the iceberg.
About 70 per cent of all ocean debris sinks down from the surface, leading experts to fear that huge rubbish dumps are accumulating unseen at the bottom of the ocean.
Plastic becomes brittle in seawater because it’s subjected to sunlight, waves and salt.
It breaks up into minute pieces and mixes with plankton, so tiny particles of the plastic are sucked up by marine life.

Craig Leeson, director of A Plastic Ocean, said: “Plastic is the most durable material man has ever made, and every piece ever produced is still on the planet in some shape or form.
“If you take plastic water bottles as an obvious example, one of the major problems is that people are using plastic water bottles thinking they are doing themselves a favour, when they are actually damaging their own health.
“The irony of this is that the water in most of these bottles sold to people is not as good as their own tap water.” Divers are increasingly reporting human rubbish on the bottom of the ocean
Credit: Plastic Oceans Foundation

David Jones, executive adviser on the film, added: “Technology can only do so much. We need to shift people’s perspectives.
“We need to make plastic valuable again. At the moment, the plastic around a water bottle is far more valuable than the water inside it, but people don’t see it like that.
“It’s bizarre that we have to pay someone to take away what is essentially a valuable commodity. Plastic is worth about £400 a ton, but we just throw it away.
“With global warming, we probably have to accept we’re in a predicament and try and mitigate it, but I think with plastic we are still clinging on to the cliff by our fingertips and we still have the chance to pull ourselves back. We have the capacity to do it.”
A Plastic Ocean can be downloaded from iTunes and screenings are taking place throughout the country.