Under a magnifier, a splash of seawater teems with life.
The planktonic soup includes bug-like copepods; long, glassy arrowworms; coiled filaments of cyanobacteria; rectangular algae called diatoms; fish eggs; and a big-eyed larval crab the size of a rice grain.

"Small is beautiful," declared economist E. F. Schumacher.
Wise perspective for a planet where most organisms are built on a minor scale.
A dipperful of seawater can reveal a hodgepodge of tiny free-swimmers and nebulous drifters that fog the water column.
Many are microscopic. 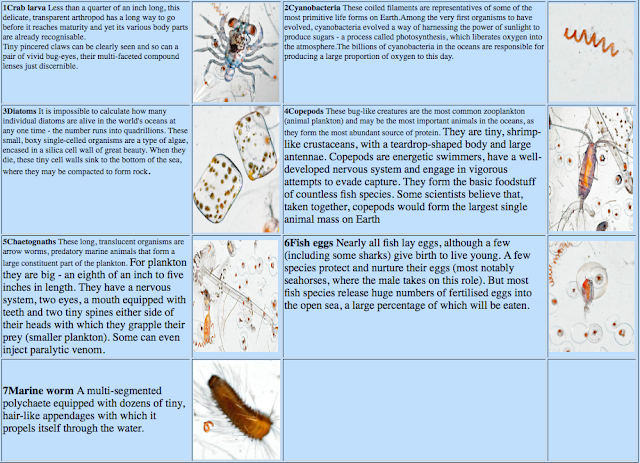 As if you needed another reason not to drink sea water!
David Liittschwager, an accomplished award-winning photographer who has created numerous marine wildlife photos for National Geographic, has created an image showing the microfauna that exists inside a single drop of seawater!
By magnifying the water 25 times, he showed that the salty taste of seawater isn’t just salt – there are bacteria, worms, fish eggs, crab larva, diatoms, and a whole host of other creepy crawlies all fighting for a place on your tongue.
Dive-shield has a more accurate breakdown of the critters in this awesome shot.

Curled like a fishhook, a larval blenny (Entomacrodus species) is transparent and nearly colorless beneath the photographer’s lights.
Although these fish inhabit offshore Hawaiian surface waters during their early days, as adults they live in shallow, surf-beaten tide pools along rocky shores.

Others would be visible except they're virtually transparent.

A larval swordfish measuring less than an inch has a long way to go to reach a length of up to ten feet (three meters) which it may attain over its lifespan of perhaps 10 to 20 years.
In these early days it eats fish larvae and tiny crustaceans called copepods—and is always at risk of becoming a snack for larger fish.

This larval flounder swims with other fish for now, hidden from predators by transparency (the color is an effect of lighting).
It will soon be a bottom dweller that shimmies into the sand, gazing upward. Eyes start out one on each side; as the skull develops, one migrates to join the other.

No bigger than a quarter, a Glaucus nudibranch preys on toxic Portuguese men-of-war, appropriating their stinging cells for its own defense.
Camouflaged in blue and silver, this sea slug was caught off Hawaii but drifts in mild waters worldwide.

Their lives are precarious.

Fish eggs gathered from near the sea surface in a fine-mesh net house embryos (visible, right) and oil globules to nourish the hatchlings.
Some wear shells or exude toxins against predators; others are active only after dark.

Pea-size and big-eyed, the larva of the slender mola is easy pickings for larger fish.
But as an adult it will grow into a cone-shaped creature three feet (0.9 meters) long.

But untold numbers succumb to hungry mouths—each other's or those of bigger foe.

This young octopus surfaces under cover of darkness to feed near the sea surface.
When mature, it will stick to the seafloor, strong-arming prey and popping into hidey-holes for shelter.

To see the show, photographer David Liittschwager joined scientists from the National Oceanic and Atmospheric Administration off the island of Hawaii.


Photographer David Liittschwager discusses the diversity of life and the intersections between art and science as he gathers and photographs some of the creatures that inhabit the waters beneath the Golden Gate Bridge.

Inhabitants must specialize to survive in these open, nutrient-poor waters—making for rich diversity.

This jellyfish relative called a blue button isn’t one organism but many, joined at the gas-filled hub that keeps the colony afloat.
Each tentacle has a specialized role in the cooperative—catching prey, digesting, or reproducing.
The pigment blocks ultraviolet rays.

Liittschwager sampled with a bucket and fine-mesh net; at night, he lowered lights as lures.
What squirmed toward the glow?
"A genuine riot of life," he says.
The scientists kept some animals on board to confirm identities; the rest they returned to the sea.

A larval crustacean (a shrimp or a lobster) seeks prey with its bulbous eyes; its spearlike rostrum serves for defense.

Condenser lenses cast focused beams to outline see-through specimens; side lighting rendered a baby flounder iridescent, and a backlight exposed its developing bones and organs.
Tinkering with light, Liittschwager captured the nearly invisible.
Posted by Peio at 1:40 AM