Interactive version of the 2014 submarine cable map.
TeleGeography’s Submarine Cable Map has been updated for 2014,
providing an excellent representation of the infrastructure that makes global connectivity global.
The latest edition depicts 285 cable systems that are currently active or due to enter service by 2015.

Great news for connectivity connoisseurs: the analyst firm TeleGeography just published this year’s edition of its world map, featuring all the submarine cable systems that comprise the arteries of the internet.

The map also shows the cables’ landing points, which is handy for those who take an interest in the current surveillance scandal.
Why is British intelligence so good at tapping cables?
Here’s why – so many of them pass through the U.K.:

Unfortunately this year’s edition lacks a neat feature of Telegeography’s 2012 and 2013 maps, which was a breakdown of how much of the cable systems’ capacity is actually being used.
It also doesn’t have the 2013 edition’s Olde Worlde appeal.
On the plus side, it does offer a good breakdown of cable faults over recent years, cable-laying ships and maintenance zones, if that’s your thing.

One cable system that’s not on the map, probably because it will only go live in 2016, is the Asia Africa Europe-1 (AAE-1) cable that was detailed on Tuesday.
AAE-1 will run from South-East Asia to Africa and Europe via the Middle East, and yesterday the backing consortium announced membership including the likes of China Unicom, PCCW, Etisalat and Ooredoo.

The map depicts routes of 263 in-service and 22 planned undersea cables.
Each country is colored according to how many international submarine cable system links are connected there.
Capital cities and the location and direction of 44 cable vessels (as of December 6, 2013) are also provided.

Infographics provide data on cable faults and repairs, including:

All these submarine telecommunication cables leading to the following map of the Internet : 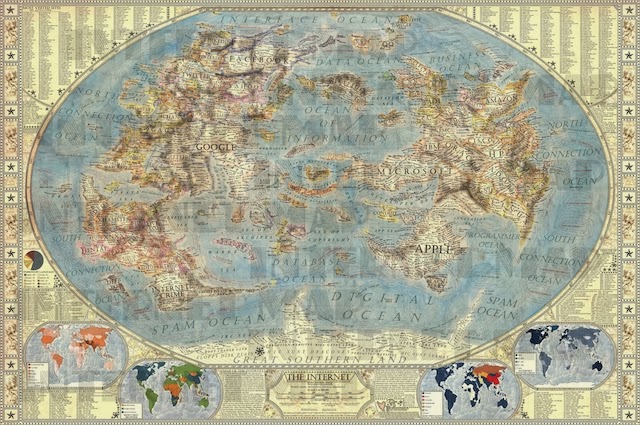 Map of the Internet 1.0: explore this beautiful, hand-drawn map of the online world
(see The Independant)