Rockall reveals what lies beneath

Rockall may seem tiny, but most of its mass lies hidden below the waves.
Several countries are claiming ownership of the islet –
and the fishing and mineral rights that would go along with it
From HeraldScotland

It Is one of the most desolate and disputed pinnacles of rock in the world.

Lashed by huge waves, besieged by seabirds and dirty white with guano, Rockall pokes its tiny head above the Atlantic, 228 miles west of North Uist.

>>> geolocalization with the Marine GeoGarage <<<
Now, 200 years after the first recorded landing on the rocky islet, it is starting to reveal its hidden depths.
For the first time, Scottish scientists have mapped the sweeping underwater mountain ranges of which Rockall forms the visible peak.
Rockall is just 31 metres long, 25 metres wide and 21 metres high – but it is the tip of the highest mountain on a vast continent lying under the Atlantic Ocean.

The researchers have discovered a series of “spectacular” ridges, reefs and crevasses fanning out across the seabed.
And they have found huge conga eels lurking in the rocks, along with ling and tusk fish.

Although Rockall is best known today for featuring on Radio 4’s shipping Forecast, it was on September 8, 1811, that Royal Navy officer Basil Hall first set precarious foot on the tiny crag and climbed its 19-metre summit.
Since then it has been at the centre of a series of international arguments over which country it actually belongs to.

Ireland, Iceland and Denmark have all staked their claims.
Its ownership – and the valuable fishing and mineral rights that could go with it – is currently under investigation by the United Nations.

For the moment, however, Rockall is one of the British Isles and the westernmost part of Scotland, and scientists from Marine Scotland and Scottish Natural Heritage have been trying to learn more about it.

In July, they took the marine patrol vessel, Scotia, on an expedition to the area, equipped with a multibeam echo-sounder, underwater video cameras and specialist fish traps.
The result, unveiled today, is a brightly coloured, high-resolution map of the seabed around Rockall and its sometimes-submerged neighbour, Helen’s Reef. 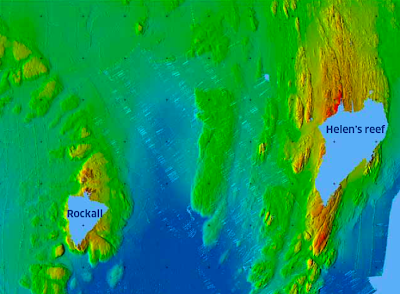 Rockall pictures (Flickr)
According to the scientists, the map shows that the two rocks are only the summits of vast continents hidden under the sea.

Francis Neat, chief scientist in Marine Scotland’s Rockall survey team, said ferocious weather had prevented previous surveys, but this year the sea was calm and they were able to collect “excellent” data.
He added: “It’s really incredible to finally be able to appreciate what Scotland’s most remote marine ecosystem looks likes beneath the waves.”

Neat said squid were caught in the deep trench between Rockall and Helen’s Reef, and well as other fish in the surrounding seas.
“By using fish traps we also discovered the reef is inhabited by huge conger eels, ling and tusk,” he added.
“Our goal is to support long-term, sustainable fisheries while ensuring appropriate marine conservation. The new data from the Rockall area will help us achieve this.”

Until now there were no detailed maps of the shallow waters around Rockall, which rises 2000 metres from the deep ocean plains.

Scottish Environment Secretary Richard Lochhead said:
“It’s fantastic that Scotland has reaffirmed our possession of Rockall through this survey.
This information will help to deepen our understanding of what is a unique and isolated marine ecosystem.”