When the moon passes through the Earth's shadow,
it causes the moon to look very unusual for a short period of time.
This event is called a lunar eclipse, and it occurs roughly twice a year.
There's one viewable to folks outside of North America on June 15,
so sit back and learn more about how lunar eclipses work in this video!
Credit NASA/GSFC
From AFP

The longest lunar eclipse in more than a decade turned the moon blood red on Thursday, giving stargazers around the world a rare visual treat.

The first eclipse of the year -- when the Earth casts its shadow over the Moon -- was seen in parts of Europe, Africa, Asia and Australia.
Often the moon turns brown but this time it became a reddish, coppery-colour, tinged by light from the Sun.

Combination photo shows the moon as it undergoes a total lunar eclipse
as seen from Jerusalem June 15, 2011. (Photo: Reuters / Nir Elias)
The terrestrial shadow started to fall at 1724 GMT and lifted around 2300 GMT, although "totality" -- when the lunar face is completely covered -- lasted 100 minutes -- the longest since July 2000. 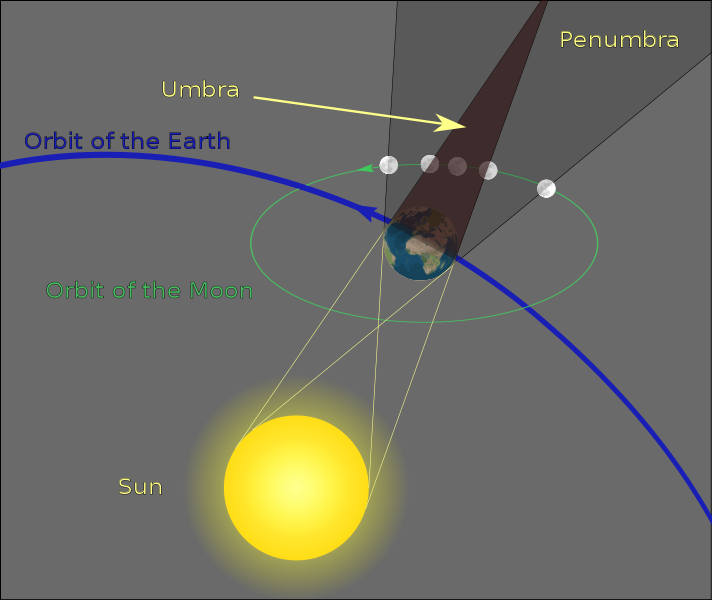 Geometry of a lunar eclipse
While keen astronomers in parts of Australia had to contend with dense cloud cover and rain, others had a clearer view of the spectacle.
Around 130 people watched at the Sydney Observatory, with one woman dressed as a vampire.
"There was (also) a child dressed very elegantly as if she was from another century, and a little boy dressed up as a red superhuman," Sydney Observatory manager Toner Stevenson told reporters.
Professor Fred Watson, astronomer-in-charge at the Australian Astronomical Observatory, said the best view would have been from the moon itself.
"If you could watch the phenomena, you would see the earth moving across the sun and it creating a brilliant red rim around the earth," he said.

In Singapore, over 700 people gathered outside a local science centre to watch, local daily the Straits Times reported.
Some avid enthusiasts staked out spots more than four hours before the phenomenon occured with the centre organising astronomy talks and movie screenings to entertain the audience.

There were similar scenes in the Philippine capital Manila where hundreds of amateur and professional astronomers converged before dawn to catch a glimpse.
With blankets and flasks of coffee, the stargazers were treated to clear skies and pleasant weather.
"I will never get tired of watching these events," said Maximo Sacro, 67, the retired curator of the National Museum Planetarium who dusted off his 300-mm lens to capture the image.
"The moon's entry into the earth's shadow was right smack in the middle, it was just perfect. It was very rare and the duration was long."

The eclipse was widely seen across India with crowds gathered at the country's leading planetarium in the capital New Delhi.
The Nehru planetarium organised an overnight "moon carnival" to familiarise visitors, setting up special viewing telescopes.
But traditionalists were not as enthusiastic about the planetary changes, with authorities at several Indian temples reportedly shutting their doors to protect them from the supposed "evil effects" of the eclipse.

While the phenomenon could not be seen everywhere in the world, including the United States, space lovers still got a chance to see it unfold with Google teaming up with Slooh.com.
Slooh accesses telescopes around the world and Google live streamed the event, including audio narrations from astronomers.

There will be partial solar eclipses on July 1 and November 25, but the next total solar eclipse will not take place until November 13, 2012.
It will run in a track across North Australia, New Zealand, the South Pacific and southerly South America.