With a sight, sound and radar picture, Saildrone could build an AI database of everything in the ocean 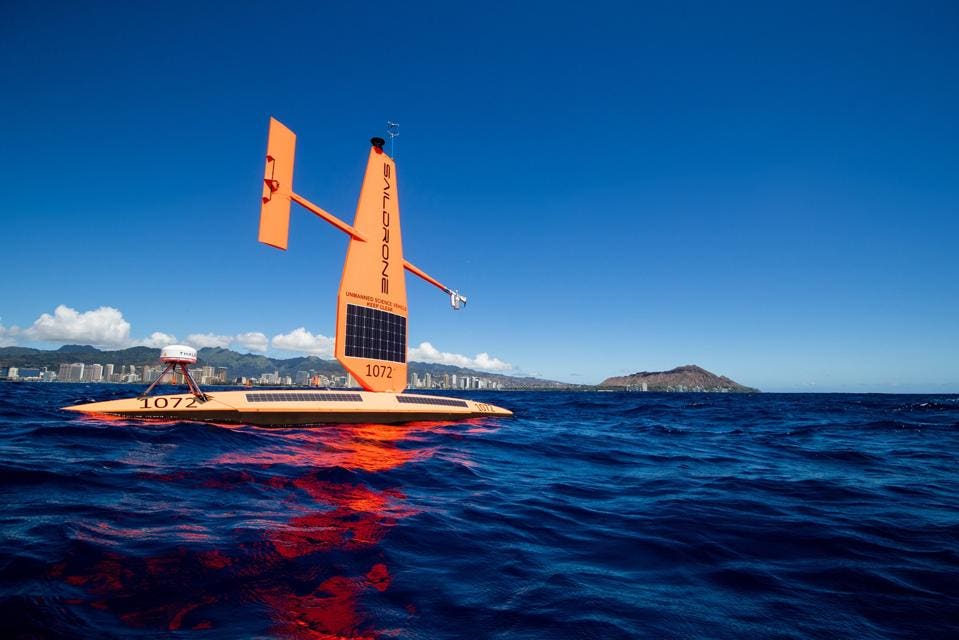 The autonomous unmanned surface vessels (USVs) that California-based Saildrone is pitching to the U.S.
Navy and Coast Guard as persistent sensor platforms grew out of company founder Richard Jenkins’ desire to go fast on land.
The mostly wind and solar-powered drones are comparatively slow on the water but their languorous pace, low hulls and tall sails could allow them to stealthily spot everything from submarines to endangered seabirds.

“Saildrone has a unique air-sea interface,” Jenkins says.
“When you can combine the acoustic signature of things with the visual signature, a radar signature and an AIS [Automatic Identification System] signature, you can build up an artificial intelligence database of all the things in the ocean.
That could be of huge value in future warfare or [environmental] conservation.”

Saildrone’s USVs look like something like advanced single-hull racing sailboats with rigid composite wing sails but without a crew.
Rather than sailing-type match-racing, Jenkins developed Saildrone’s core technology over a 10-year effort to break the land speed record for wind-powered vehicles, which he achieved in 2009 in Nevada, with a speed of 126.2 mph.

At present the company’s USVs come in small, medium and large sizes capable of carrying a variety of keel, deck and mast-mounted payloads powered by solar energy with diesel-powered assistance.

The company has built over 100 of its smallest 23-foot Explorer model, intended for long endurance ocean data gathering and measurements (fisheries, weather) and relying solely on the wind for propulsion (averaging 3 knots).
The solar panels on its sails charge batteries for cameras, oceanic/atmospheric sensors and machine learning (ML) computation.

Explorers have a range of about 15,000 miles, a year’s worth of endurance and they “excel at doing measurements in very remote places including the Arctic, Pacific and Southern Ocean,” Jenkins asserts.

A 33-foot version called Voyager adds a diesel-electric engine to power additional sensors including radar.
Its endurance is reduced to 180 days but the diesel aid to propulsion yields 4-5 knot cruise speeds.
The largest 72-foot Surveyor has more diesel capacity, a larger sail for 5 to 10 knot speeds, 180 days endurance and further sensors potentially including towed acoustic sensor arrays of the kind the Navy uses for mine and submarine detection.

Saildrone started working with U.S. Southern Command on potential maritime domain awareness (MDA) applications for drug interdiction four years ago according to Jenkins.
The company offered acoustic, visual and infrared solutions paired with computer vision and machine learning but quickly realized that SOUTHCOM (nor anyone else) had no existing database of sea-level images.

“Without millions of images of ships or boats, you can’t train a machine learning database,” Jenkins explains.
“We deployed a fleet of 30 [Explorers] around the world and started taking pictures every five seconds, amassing hundreds of millions of images of the open ocean everywhere from the Arctic to the Southern Ocean.
We then matched those images with vessels, birds, sea-ice and marine mammals...
I believe we have the world’s largest data set of maritime images.” 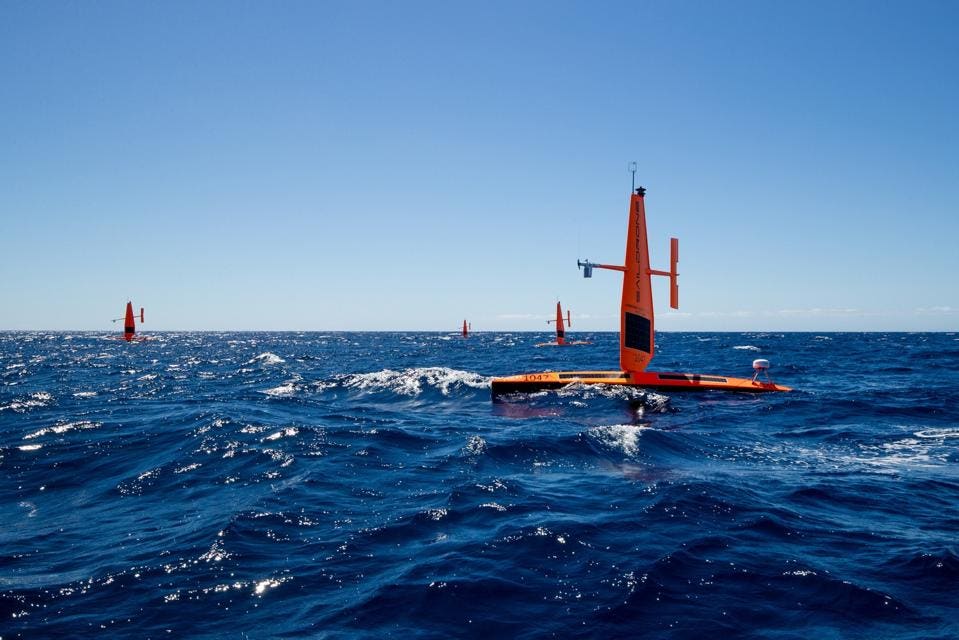 A group of six Saildrone Explorers took part in a month-long Maritime Domain Awareness demonstration for the US Coast Guard in the fall of 2020
Shane Grace photo
The database led to a contract with the Coast Guard for a low cost MDA demonstration of Saildrone Explorers for the service in Hawaii in 2020.
A group six of Explorers equipped with cameras, were evaluated alongside diesel-powered USVs from Virginia-based Spatial Integrated Systems (SIS).

The results of the USCG’s 30-day (daytime) evaluation of the USVs for applications including monitoring of illegal, unreported and unregulated fishing (IUU), weather, navigation and security showed both vessels’ strengths for different missions says Commander Blair Sweigart, chief of the modeling and simulation branch of the Coast guard’s research and development center.

“We saw that Saildrone with their persistent presence – they could stay at sea up to a year – would be great for maintaining an MDA presence in remote regions, places we cannot get too easily.”

Sweigart acknowledged that the Explorers’ slow speed made for long transit times to operational areas as well as rendering them “not great for tracking down a target to get more information.”

SIS’ diesel powered USVs power capacity enabled them to track targets of interest, get close, and provide more information and better imagery.
However they simply couldn’t stay on the water as long as the Explorers or cover long distances.

Among the lessons for the Coast Guard from this apples and oranges comparison was that, “We really need to look at the suite of technologies available in the USV space and map out the right asset for specific missions in specific regions,” Sweigart affirms.

“We can look at buoys, we can look at unmanned aerial systems.
We need to understand what’s available and build the right layer of systems to meet the missions.”

The Hawaii MDA evaluation joins informal discussions which Saildrone is having with the Navy and reinforced the need to add diesel power to get closer to targets for imagery purposes and the addition of radar for more info, resulting in the Voyager variant.
It also bolstered Jenkins ambition to add acoustic sensors to take advantage of the essentially silent operation of the sail-powered USVs.

“While we the have the above-water [sensor] solution covered,” Jenkins says, “if you’re listening under the water you can classify vessels which can enable the Navy or the Coast Guard to work out when they need to send a human-crewed vessel to interdict a target.”

Saildrone is aggressively investing in acoustic sensor technology Jenkins adds.
He sees acoustic sensing as the “biggest value proposition” for the company’s USVs without specifying what sonic approaches are being investigated.
These would logically include towed arrays and a keel mounted sonar that can reach down to 7,000 meters proposed for the 72-foot Surveyor but there other possibilities as well. 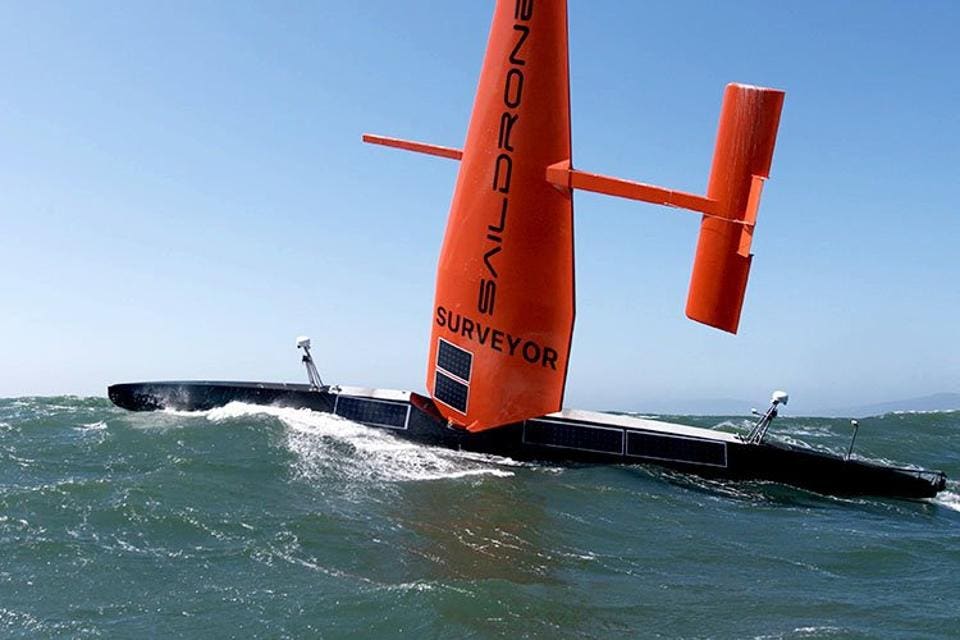 The 72-foot Saildrone Surveyor may hold the most interest, potential for Navy Maritime ISR in remote and dangerous perating areas.
Saildrone
The largest of the Saildrones would likely be of most interest to the Navy.
Its ability to monitor surface targets (at 10 miles with radar) and further build out a database would be complemented by acoustic capabilities like a shallow-water multibeam echosounder that can collect very high resolution maps of littorals.

Last month, Saildrone’s sole Surveyor USV sailed from San Francisco to Hawaii, mapping the entire 28-day transit over previously uncharted ocean.
A fleet of these or of smaller Saildrone USVs operating in distributed fashion could be of significant worth to the Navy from a broader sensing and survivability standpoint Jenkins asserts.

“With the advent of hypersonic weapons anything large [like a ship] will be taken out very quickly.
The new area [of tactical interest] is distributed ISR.
We’re not trying to replace ships and people but let’s do the job that ships and people don’t like doing, persistent operations in remote and dangerous places.”

Surveyor’s detectability is minimized by the need run the diesel for 30 minutes or less per day, its relative lack of a thermal signature, transparency to radar and potential coatings and paint schemes that may be applied.
The USV’s 50 foot mast does stick out but significantly benefits radar, cameras and other surface sensors, providing potential real-time tactical data with a lower a profile than even small typical steel naval vessels.

Distributing the USV’s offers the prospect of quietly moving mesh networks for communications, data and PNT (position, navigation, timing) as well.
Numbers on the water only increase their survivability and ISR qualities.

Naturally, numbers equate to cost.
Saildrone’s slow moving USVs have been compared to buoy ISR systems or pickets.
Jenkins points out that such systems are more feasible in shallow water.
But deep ocean-moored buoys “are phenomenally expensive and break on a regular basis,” he says.
Buoys must also be towed to and from operating locations and regularly tended to by large manned vessels.
They also disturb the water more than a slender Saildrone, requiring offset calculations, calibrations to ensure sensor fidelity. 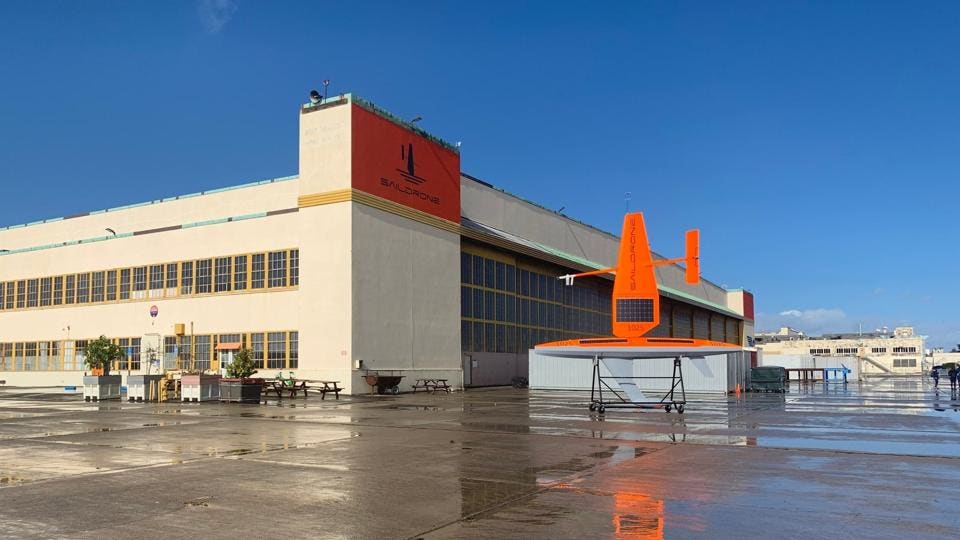 Saildrone has thus far manufactured its line of USVs at its headquarters in this former hangar at the now disestablished NAS Alameda, CA
Saildrone
Jenkins cites not only cost advantages for his drones, he also pitches a Saildrone-as-a-service model.
The company has charged commercial customers (also the Coast Guard and NOAA) a straightforward daily rate for data.
For a Coast Guard type ISR application for a mid-size drone, the cost would work out to $1 million per year, per vehicle including delivery, deployment, liability, maintenance and 24/7 tasking.

“While that sounds like a lot, it’s just over $100 an hour,” Jenkins observes.
“When you look at that it’s incredibly cost effective compared to a [manned] ship.”
Ships with sensor capabilities similar to Surveyor’s potential capabilities typically charge $25,000 per day for mapping, data, processing etc, according to Jenkins.
Should an organization want to buy, the price tag for a Voyager is $1.5m and $7.5m for a Surveyor with a standard sensor payload.
Obviously, different sensor suite desires can add cost.

A parallel commercial market for Saildrone-generated oceanographic data, weather, fisheries, and mapping could bend the cost curve further.
The company has built all of its current USVs at its Alameda, CA headquarters - a former hangar from the defunct Naval Air Station - but plans to expand manufacturing with shipyard partners on the U.S.
Gulf Coast.
Jenkins says it will begin mass producing the large Voyager by the end of this year.

The same remotely tasked autonomous control system works with all three Saildrone types and could have potential for manned vessels as augmentation or backup.
Its IP may constitute yet another revenue stream for the company.
Sales to international commercial organizations and governments like Australia are in the offing as well.

As its drones are acquired and proliferate, Saildrone may one day build its most valuable asset — a database of everything in, and on, the ocean.
Links :
Posted by geogarage at 1:29 AM