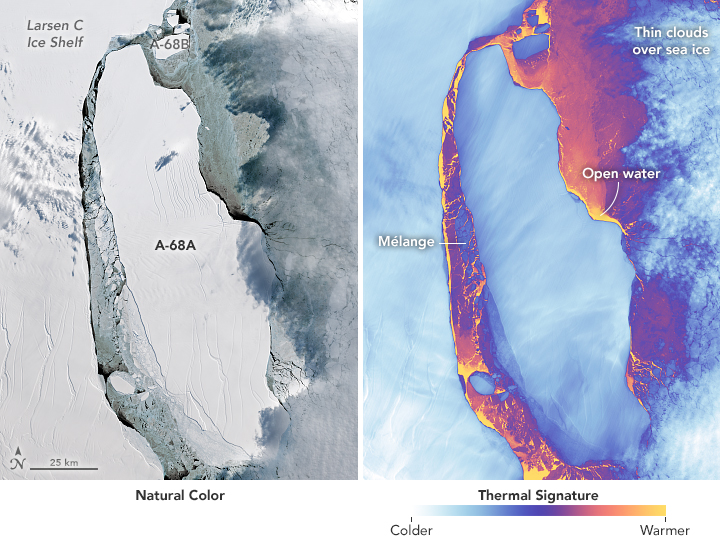 
A lot happened on the Antarctic Peninsula under the cloak of the 2017 polar night—most notably, the calving of a massive iceberg from the Larsen C ice shelf.
At the time (July), scientists had to rely on thermal imagery and radar data to observe the break and to watch the subsequent motion of the ice.
By August, scientists started getting their first sunlit views of the new iceberg, which the U.S. National Ice Center named A-68.

An animation of the progress of A-68A and A-68B, since they emerged from polar night.
After initially rocking back and forth in the cavity it formed at the end of Larsen C, A-68 has since drifted away from the ice shelf, with the gap in between being filled with mélange - smaller chunks of ice that broke off from the edges of A-68A and the face of the ice shelf, mixed with sea ice that slipped in as the larger iceberg moved farther out.
Credit: NASA/Aqua MODIS/Scott Sutherland
(other animated picture from ESA)

The Moderate Resolution Imaging Spectroradiometer (MODIS) on NASA’s Terra satellite captured a wide view of the berg on September 11.
A few days later, on September 16, the Operational Land Imager (OLI) and the Thermal Infrared Sensor (TIRS) on Landsat 8 captured these detailed images.
The image on the left shows the icebergs in natural color.
The rifts on the main berg and ice shelf stand out, while clouds on the east side cast a shadow on the berg.
The thermal image on the right shows the same area in false-color.
Note that the clouds over the ice shelf do not show up as well in the thermal image because they are about the same temperature as the shelf.
Thermal imagery has the advantage of showing where the colder ice ends and “warm” water of the Weddell Sea begins.
It also indicates differences in the thickness of ice types.
For example, the mélange is thicker (has a colder signal) than the frazil ice, but thinner (warmer signal) than the shelf and icebergs. Larsen Ice Shelf, Released 06/10/2017 10:00 am
Copyright contains modified Copernicus Sentinel data (2017), processed by ESA
The Copernicus Sentinel-3A satellite takes us over the Antarctic Peninsula and the adjacent Larsen Ice Shelf, from which a massive iceberg broke off in July.
The image has been manipulated, so clouds appear pink while snow and ice are blue to help us differentiate between them.
The only land clearly visible is the tip of the Peninsula in the upper left, while sea ice covers the Weddell Sea to the right.
Captured on 25 September, the image shows the iceberg near the centre.
The A68 berg had been jostling back and forth against the ice shelf, but more recent satellite imagery revealed that the gap between the berg and the shelf is widening – possibly drifting out to sea.
An iceberg’s progress is difficult to predict.
It may remain in the area for decades, but if it breaks up, parts may drift north into warmer waters. Since the ice shelf is already floating, this giant iceberg does not influence sea level.
A68 is about twice the size of Luxembourg and with its calving has changed the outline of the Antarctic Peninsula forever – about 10% of the area of the Larsen C Ice Shelf has been removed.
The loss of such a large piece is of interest because ice shelves along the peninsula play an important role in ‘buttressing’ glaciers that feed ice seawards, effectively slowing their flow.
Previous events further north on the Larsen A and B shelves, captured by ESA’s ERS and Envisat satellites, indicate the flow of glaciers behind can accelerate when a large portion of an ice shelf is lost, contributing to sea-level rise.

Both images show a thin layer of frazil ice, which does not offer much resistance as winds, tides, and currents try to move the massive iceberg away from the Larsen C ice shelf.
In a few weeks of observations, scientists have seen the passage widen between the main iceberg and the front of the shelf.
This slow widening comes after an initial back-and-forth movement in July broke the main berg into two large pieces, which the U.S. National Ice Center named A-68A and A-68B.
The collisions also produced a handful of pieces too small to be named. 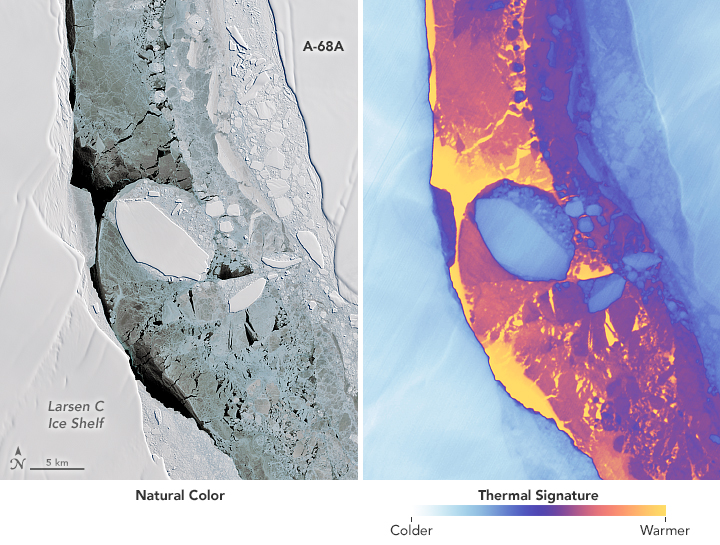 The primary reason for A-68 drifting away from Larsen C is apparently winds blowing off the ice shelf, which forced sea ice farther into the Welland Sea, opening up an area for A-68 to move into.
The motion of the iceberg, after this, will depend on how the sea ice moves and melts as the south polar region progresses into spring.

One unnamed iceberg, shown in detail above, has been drifting northward in the passage since the break.
Notice how the edges of this piece appear much sharper than the edges of the shelf or A-68A.
Those edges have already been rounded by blowing snow and gravity, but the smaller piece has been battered and reshaped by recent collisions, resulting in its highly defined edges. 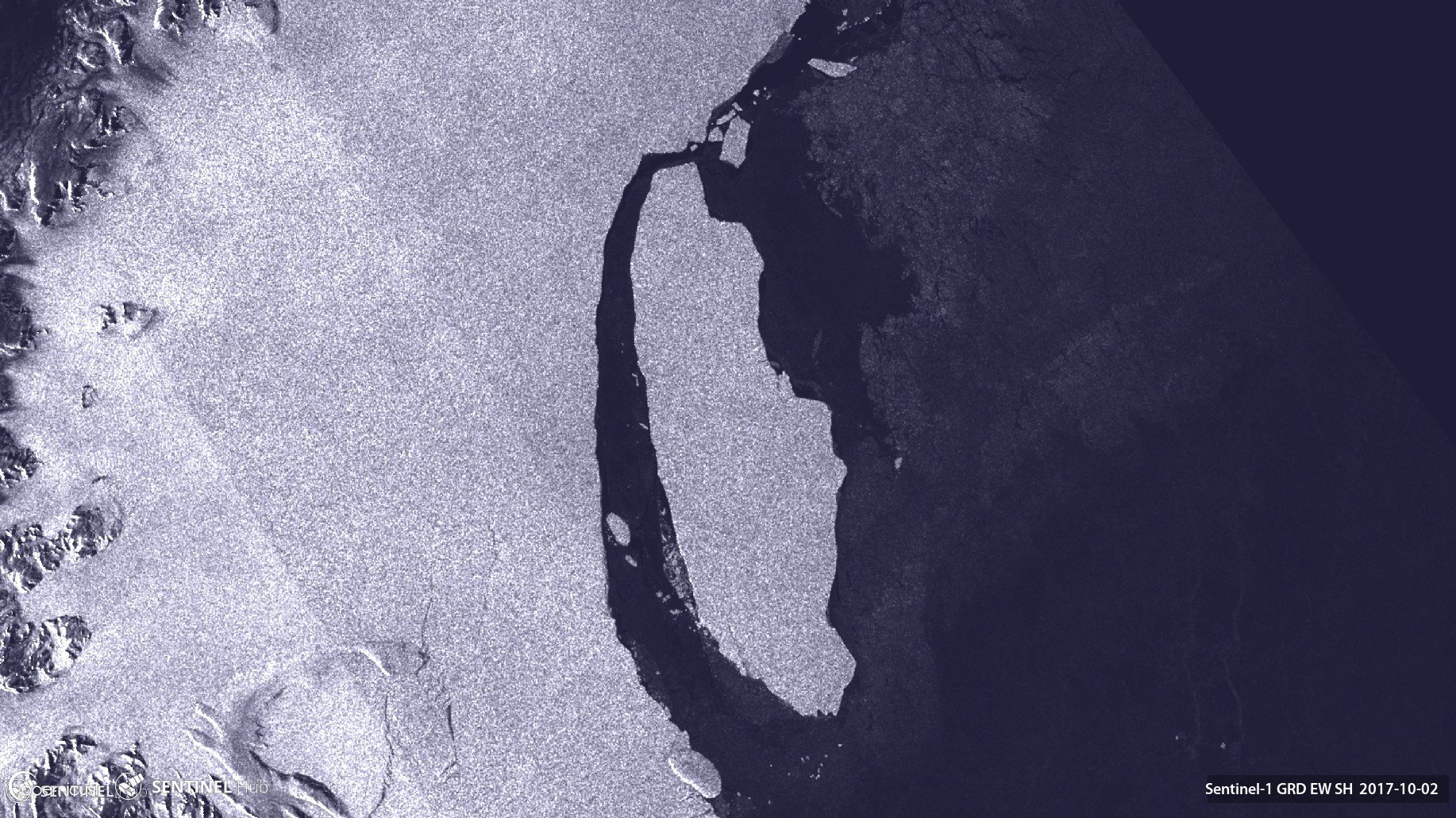