What happens to oil spilled in oceans? Oil in the Ocean photooxides within hours to days, new study finds Satellite image taken on May 9, 2010 of the Deepwater Horizon oil spill site in the Gulf of Mexico. Credit: MODIS on NASA's AQUA satellite, 9 May 2010 @ 190848 UTC.
Downlink and processed at the UM Rosenstiel School's Center for Southeastern Tropical Advanced Remote Sensing (CSTARS)

From Miami University by Diana Udel

Study provides new details on the fate of spilled oil in the marine environment, effectiveness of chemical dispersants

A new study lead by scientists at the University of Miami (UM) Rosenstiel School of Marine and Atmospheric Science demonstrates that under realistic environmental conditions oil drifting in the ocean after the DWH oil spill photooxidized into persistent compounds within hours to days, instead over long periods of time as was thought during the 2010 Deepwater Horizon oil spill.

This is the first model results to support the new paradigm of photooxidation that emerged from laboratory research. 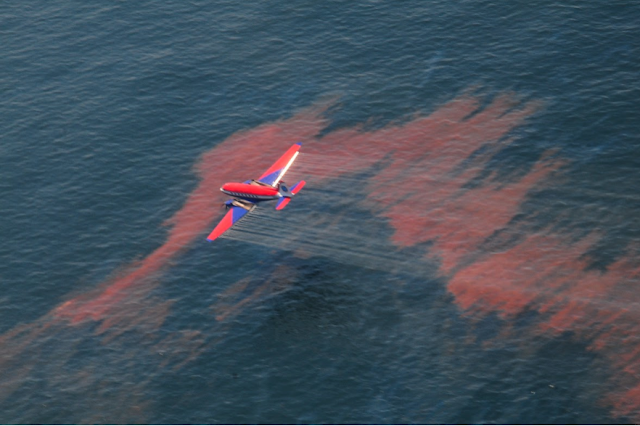 After an oil spill, oil droplets on the ocean surface can be transformed by a weathering process known as photooxidation, which results in the degradation of crude oil from exposure to light and oxygen into new by-products over time.
Tar, a by-product of this weathering process, can remain in coastal areas for decades after a spill.
Despite the significant consequences of this weathering pathway, photooxidation was not taken into account in oil spill models or the oil budget calculations during the Deepwater Horizon spill.

The UM Rosenstiel School research team developed the first oil-spill model algorithm that tracks the dose of solar radiation oil droplets receive as they rise from the deep sea and are transported at the ocean surface.
The authors found that the weathering of oil droplets by solar light occurred within hours to days, and that roughly 75 percent of the photooxidation during the Deepwater Horizon oil spill occurred on the same areas where chemical dispersants were sprayed from aircraft.
Photooxidized oil is known to reduce the effectiveness of aerial dispersants. 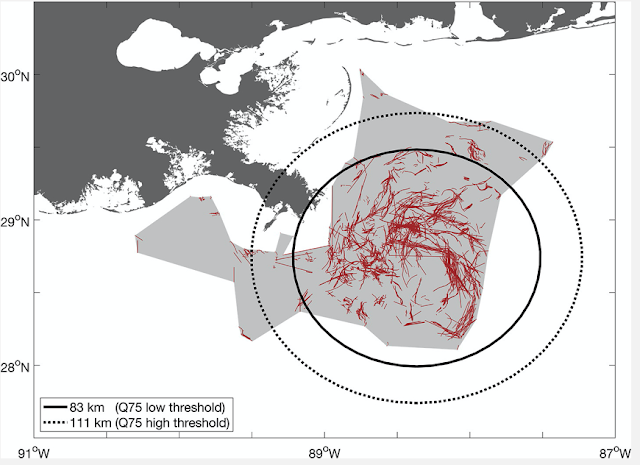 “Understanding the timing and location of this weathering process is highly consequential. said Claire Paris, a UM Rosenstiel School faculty and senior author of the study.
“It helps directing efforts and resources on fresh oil while avoiding stressing the environment with chemical dispersants on oil that cannot be dispersed.”

“Photooxidized compounds like tar persist longer in the environment, so modeling the likelihood of photooxidation is critically important not only for guiding first response decisions during an oil spill and restoration efforts afterwards, but it also needs to be taken into account on risk assessments before exploration activities” added Ana Carolina Vaz, assistant scientist at UM’s Cooperative Institute for Marine and Atmospheric Studies and lead author of the study.

The study, titled “A Coupled Lagrangian-Earth System Model for Predicting Oil Photooxidation,” was published online on Feb 19, 2021 in the journal Frontiers in Marine Science.
The authors of the paper include: Ana Carolina Vaz, Claire Beatrix Paris and Robin Faillettaz.

The study was supported by the Gulf of Mexico Research Initiative (GoMRI): C-IMAGE III (Center for the Integrated Modeling and Analysis of the Gulf Ecosystem) and RECOVER 2 (Relationship of Effects of Cardiac Outcomes in ﬁsh for Validation of Ecological Risk).
Posted by geogarage at 1:50 AM