" I believe the title of pirate should be given to those who come to our waters illegally.”
– Farah Ismail Eid, Interview with a Pirate

In early 1991 a few miles off of the coast of Somalia—just as Mohamed Siad Barre’s dictatorship was collapsing—the merchant vessel Naviluck was attacked by three boatloads of men who killed some of the ship’s crew members, set it on fire, and sank it.
The attackers did not try to steal cargo, hold hostages, or collect ransom.
More than likely, coastal residents who had grown hostile towards foreign vessels decided to take matters into their own hands. 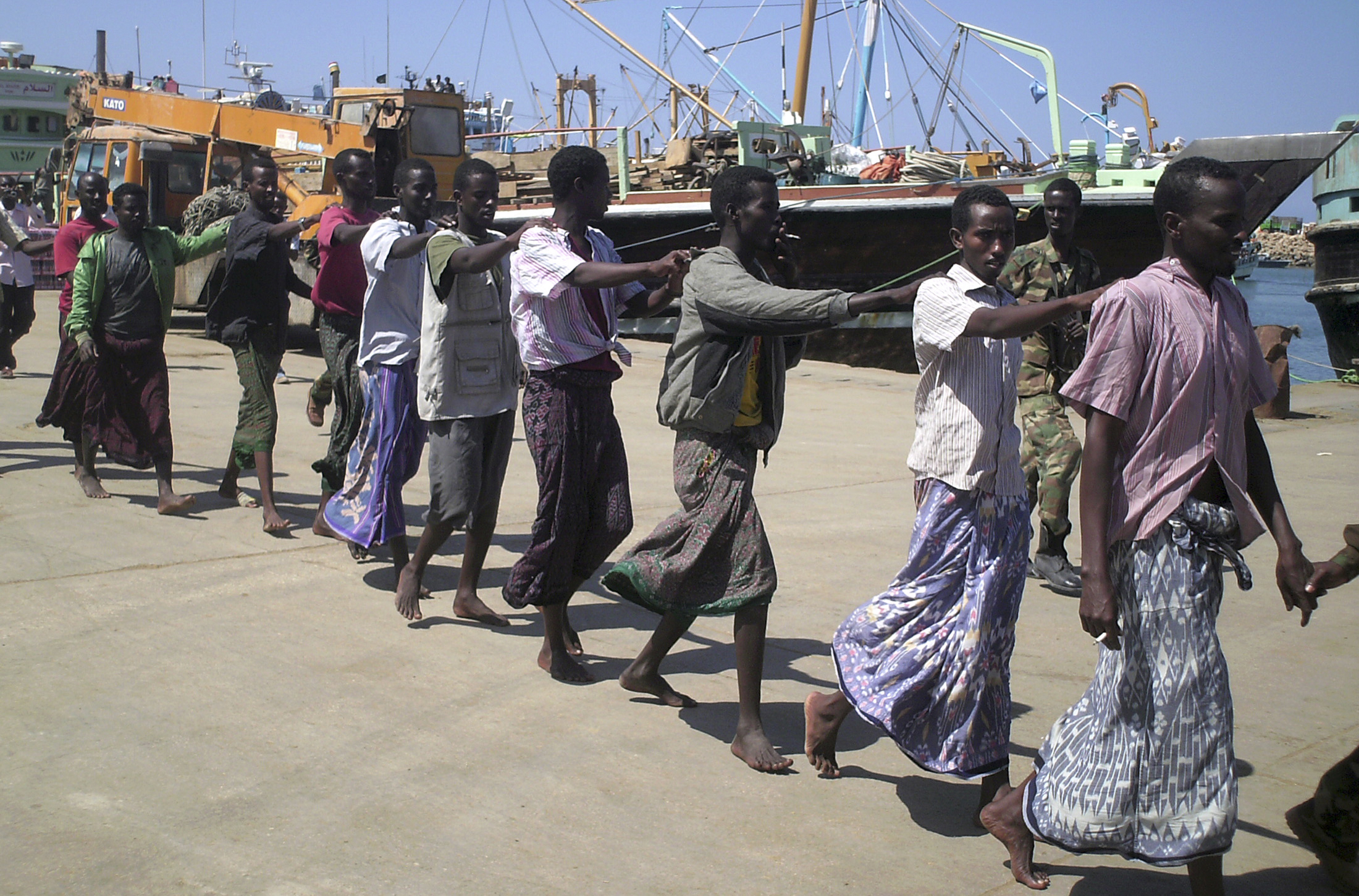 Somali pirates captured by French forces in the Gulf of Aden are paraded at the northern port town of Bosasso, November 18, 2009.
French navy handed over 12 pirates captured in the Indian Ocean to the authorities in the semi-autonomous northern Somali region of Puntland

Prior to 1991, piracy off the Horn of Africa was more or less unknown, with far more incidents occurring in the Strait of Malacca or the Gulf of Guinea.
In the 1980s the Somali government resettled thousands of nomadsfrom the drought-stricken interior to work in coastal fishing cooperatives, vastly expanding both artisanal fish production and the number of people dependent on small-scale fisheries.
As Somalia plunged into civil war, foreign fishing fleets began operating inside Somalia’s Exclusive Economic Zone (EEZ), sometimes illegally.
Many of these ships employed habitat-destroying methods such as bottom trawling and blast fishing, or methods that routinely caught large volumes of non-target species, which would then be discarded.
Egypt, Greece, South Korea, and Taiwan were among the nations that trawled in Somali waters in the 2000s.
Around the same time, EU-flagged vessels and EU-owned vessels flagged to other nations began purse seining in the Somalia EEZ.
In response, Somalis took to the seas to fight them off.
Between the 1990s and 2010—as some ships began to arm themselves, and some shipping companies made deals with warlords for protection—piracy in the western Indian Ocean became far more organized, sophisticated, and lethal.

International organizations have long argued that poverty and unemployment in coastal communities are underlying causes of piracy.
Others are skeptical that problems facing local fisheries are connected to piracy, based on reports that many pirates are actually members of inland nomadic clans or criminal gangs.
In new research, we explore these links—not only in the context of Indian Ocean piracy, but globally.
We segment the world’s oceans into 1 degree-by-1 degree cells, and analyze the spatial links between harmful fishing practices and piracy incidents between 2005 and 2014 (see map).
Previous research has tended to focus on country-specific variables (e.g., poverty, per-capita income, conflict, etc.) and has not adequately addressed the location-specific factors that influence piracy.
By contrast, our data-driven spatial analysis is based on the geographic locations of actual pirate incidents.

What did we find?

Second, we find that piracy is not more likely to be close to impoverished coastal areas, nor near countries affected by drought and associated agricultural losses.
On the contrary, piracy tends to be more prevalent in areas with greater levels of economic activity.

Third, and most critically, pirates are more likely to attack in maritime cells in which there is high bycatch or where there are high rates of fish catch using habitat-destroying practices (e.g., bottom trawling, blast fishing).
Similarly, piracy spikes in areas where higher levels of illegal, unreported, and unregulated (IUU) fishing are prevalent.