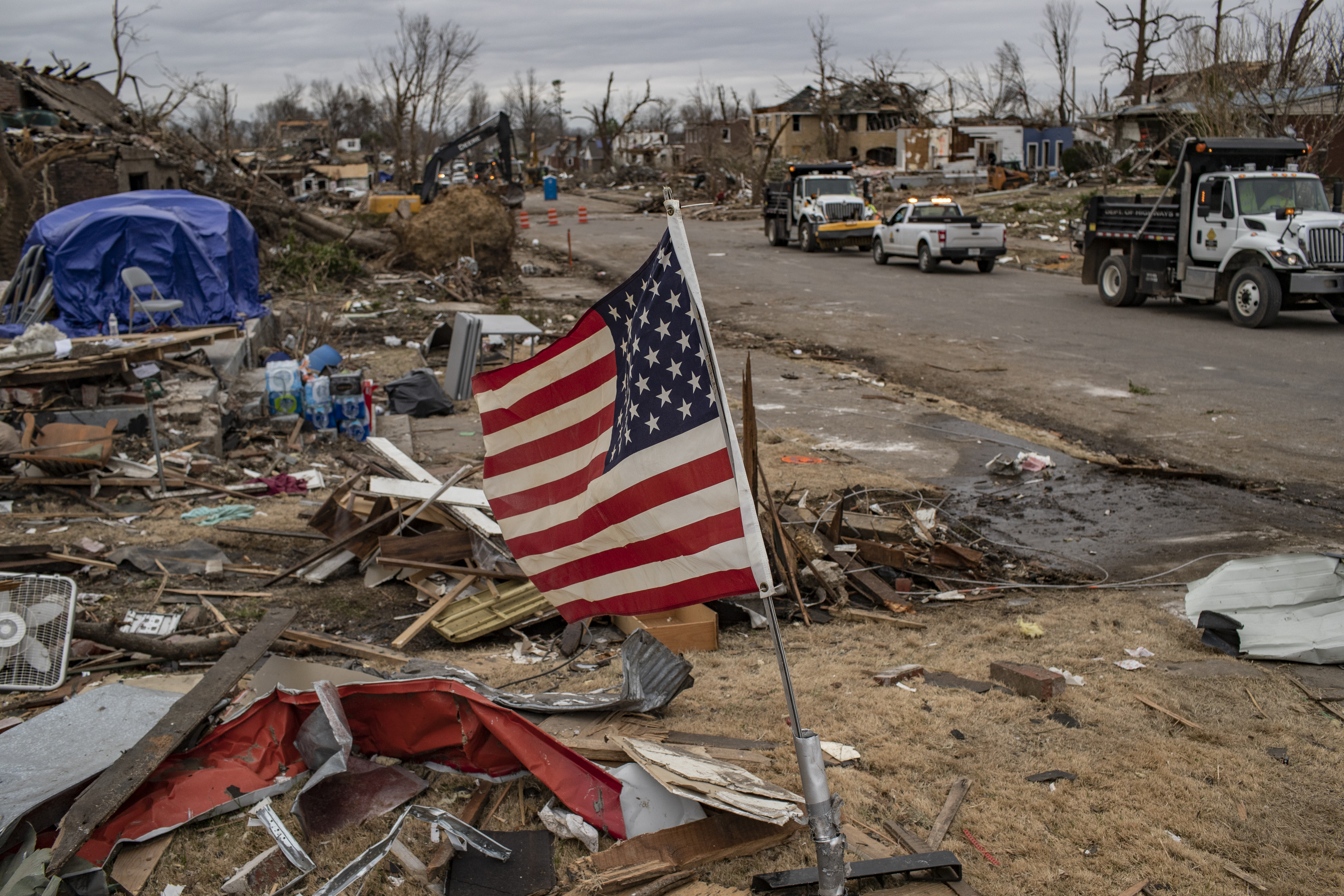 Cleanup crews work on a street in Mayfield, Ky., on Wednesday. (Austin Anthony for The Washington Post)
From WP by Tim Gallaudet,  Kathy Sullivan and Marshall Shepherd

It has happened again.
Yet another devastating weather event — this time the deadliest December tornado outbreakon record, and probably one of the top 10 deadliest for any month — has reminded us that we’ve entered a new era of environmental extremes.
While we don’t yet know the link between climate change and this particular event, we do know that a warming climate has increased the effects of extreme weather, which scientists agree will only get worse in the years and decades to come.

As a nation, we must meet this moment by doubling down on efforts to improve forecasts and early warnings in the face of what Federal Emergency Management Agency Administrator Deanne Criswell rightly called “the crisis of our generation.”

The Weather Forecasting Research and Innovation Act of 2017, also known as “the Weather Act” and widely viewed as the first comprehensive weather authorization in 25 years, led to several important advances in U.S. weather forecasting capabilities.
These include the establishment of the National Oceanic and Atmospheric Administration’s tornado warning improvement program to predict tornadoes beyond one hour in advance, greater incorporation of private-sector data into National Weather Service operational models and forecasts, and with subsequent amendments in 2019, the establishment of NOAA’s Earth Prediction Innovation Center to restore U.S. leadership in weather modeling.

In the years since, however, our world has changed dramatically.
Every year brings more disasters to more places, with higher costs.
Local communities don’t have the tools and resources to cope with more frequent and more intense flooding, heat waves, wildfires and other environmental extremes.
The stakes are now higher than ever for how we go about funding and implementing policies and programs that will allow us to adapt to and mitigate severe weather and climate conditions.

Even before the recent tornado outbreak, the United States had been ravaged by multiple compound weather events this year.
A weakened polar vortex caused extreme cold that crippled energy and water infrastructure throughout Texas and the Southeast. Hurricane Ida made landfall along the Gulf Coast, disrupting commerce, oil and gas production, and the daily activities of millions of Americans.
The remnants of Ida also caused disastrous flooding in the highly populated Northeast, as historic rainfall rates overwhelmed storm-water management systems designed for a past century.

While the Weather Service strives to make the United States a Weather-Ready Nation, many remain unprepared for the weather-climate system that we live within.

Congress has acknowledged this and has begun to act.
The bipartisan PRECIP and FLOODS bills aim to revise the Weather Act to improve NOAA’s precipitation estimates and decision support to reduce flood-related impacts and costs.

More can be done, however, especially in view of the inflection point we are at today, where private industry has the technology, capital and velocity to deliver solutions in a fraction of the time and cost than our federal agencies can do on their own.

We believe the following three updates to the Weather Act could accelerate improvement of our nation’s weather and climate resilience:

Since 2017, the sources of commercial satellite and in situ data that can be used to improve predictions and warnings have increased by an order of magnitude.
Expanding this provision to additional commercial weather and ocean data and reducing the evaluation period would improve the skill of weather models much sooner than waiting for NOAA’s next generation of weather satellites to launch in the 2030s.
2) Make more use of other transactional authority.
The 2019 amendment to the Weather Act provides NOAA with “additional transaction authority” to enter into agreements with commercial and other organizations for the “construction, use, operation, or procurement of value-adding” platforms and data when NOAA objectives cannot be met otherwise. In the two years since, NOAA has used this authority only once, largely because the language says that NOAA “may” use such authority, rather than “shall.”

By mandating a certain number of agreements with the private sector annually, NOAA would be emboldened to take advantage of the burgeoning marketplace, much like the Department of Defense has to more quickly and efficiently onboard innovative industry capabilities.

3) Tap private-sector innovation for weather and climate services.
The Interagency Council for Advancing Meteorological Services was established by the White House Office of Science and Technology Policy in 2020 under the authority of the Weather Act “to improve coordination of relevant weather research and forecast innovation activities across the federal government,” with the intent of elevating meteorological services to the highest levels of government.

To help achieve the council’s charter to lead the world in providing societal benefits with information spanning local weather to global climate, Congress should add language requiring it to conduct a study on emerging private-sector capabilities and commercially available off-the-shelf solutions.

Further, the council should be directed to establish an advisory group, similar to the National Space Council’s Users’ Advisory Group, to ensure industry and nonfederal entities are adequately represented.

Collectively, these three adjustments to the Weather Act could be considered the climate equivalent of the National Institutes of Health’s extraordinary response to the pandemic.
Combining a whole-of-government approach and featuring the Department of Defense as a co-lead, NIH forged an ambitious and agile partnership with 20 biopharmaceutical companies to accomplish a moonshot for modern medicine.

Like the pharmaceutical industry, the private weather enterprise can meet critical needs that the government cannot on its own through additional data, cost-effective observational and computational infrastructure, and superior decision-support tools.

This isn’t to say that we advocate for industry replacing the Weather Service by charging U.S. citizens for lifesaving services.
Rather, industry can take on a greater role while the government continues to set standards and provide oversight.
The idea is for the government to do what only it can do and the private sector to do what it can do better, resulting in better performance and return on investment.

NOAA is looking to receive nearly $1 billion in funding from the recent bipartisan infrastructure deal and anticipated FY22 appropriations for forecasting capability improvements, with more than $47 billion in the bill designated for climate resilience.
If our combined 100-plus years of service in and collaboration with the U.S. government has taught us anything, it is how slow federal acquisition processes are in allocating resources of that magnitude.

Greater contributions from the private sector can help us improve forecasts and early warnings at the speed and scale our nation needs and expects.
Codifying them in a Weather Act 2.0 would jump-start an Operation Warp Speed for weather and climate, and the lifesaving impact could rival that of vaccines for the pandemic.
The authors consult for multiple weather, ocean and space technology companies.
Gallaudet is a retired Navy rear admiral, former deputy administrator at NOAA, and former assistant secretary of commerce for oceans and atmosphere.
Sullivan is a former administrator of NOAA, former undersecretary of commerce for oceans and atmosphere, and was recently appointed to the President’s Council of Advisers on Science and Technology.
Shepherd is director of the University of Georgia atmospheric sciences program, former president of the American Meteorological Society, and has been elected to the National Academy of Sciences.