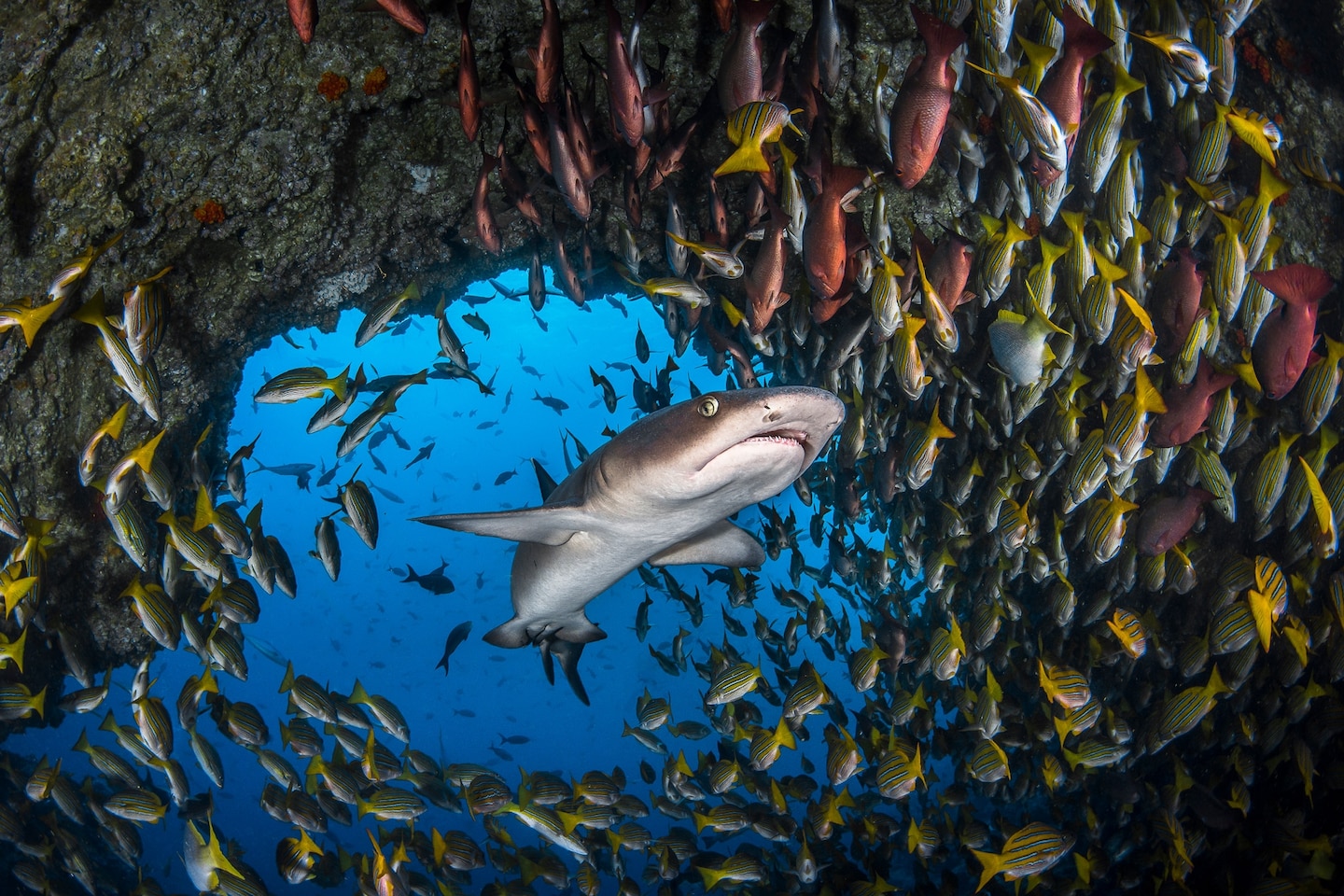 A whitetip reef shark swims inside a cave off the coast of Cocos Island.
Newly announced legal protections will expand the fishing ban around Cocos Island and create more safe habitat for vulnerable shark species like these.
photo : Greg Lecoeur, NatGeo image collection
From National Geographic by Sarah Gibbens

Three times the size of the country’s mainland, the reserve’s abundance of sharks, whales, turtles, and other marine life has been described as an “underwater Jurassic Park.”
The first time he dove into the waters surrounding Cocos Island, Enric Sala felt like he was in an “underwater Jurassic Park.”
“I remember vividly diving under a school of 200 hammerhead sharks, inside a school of thousands of bigeye trevally, and [being] surrounded by 20 green turtles mating,” says the National Geographic explorer-in-residence, in an email. 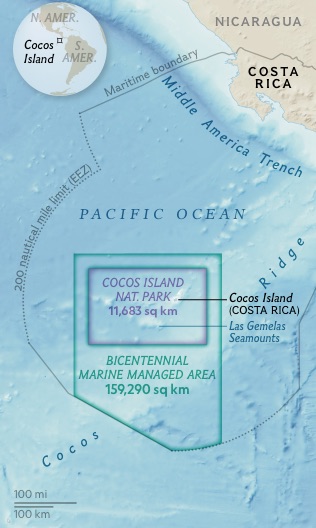 The announcement means that Costa Rica, famously ambitious in its environmental goals, is now protecting 30 percent of its oceans, compared to just 3 percent before today's announcement.

Earlier this year, 50 countries said they would protect 30 percent of their land and 30 percent of their oceans by 2030.
Separately, the Biden administration has pledgedto work toward a similar goal.
This “30 by 30” target is one scientists have said is necessary to mitigate climate change and prevent rapid biodiversity loss.
Today, less than 8 percent of the world’s oceans are under any sort of legal protection, and Sala says more is needed “if we are to prevent an extinction crisis and the collapse of our life support system.” 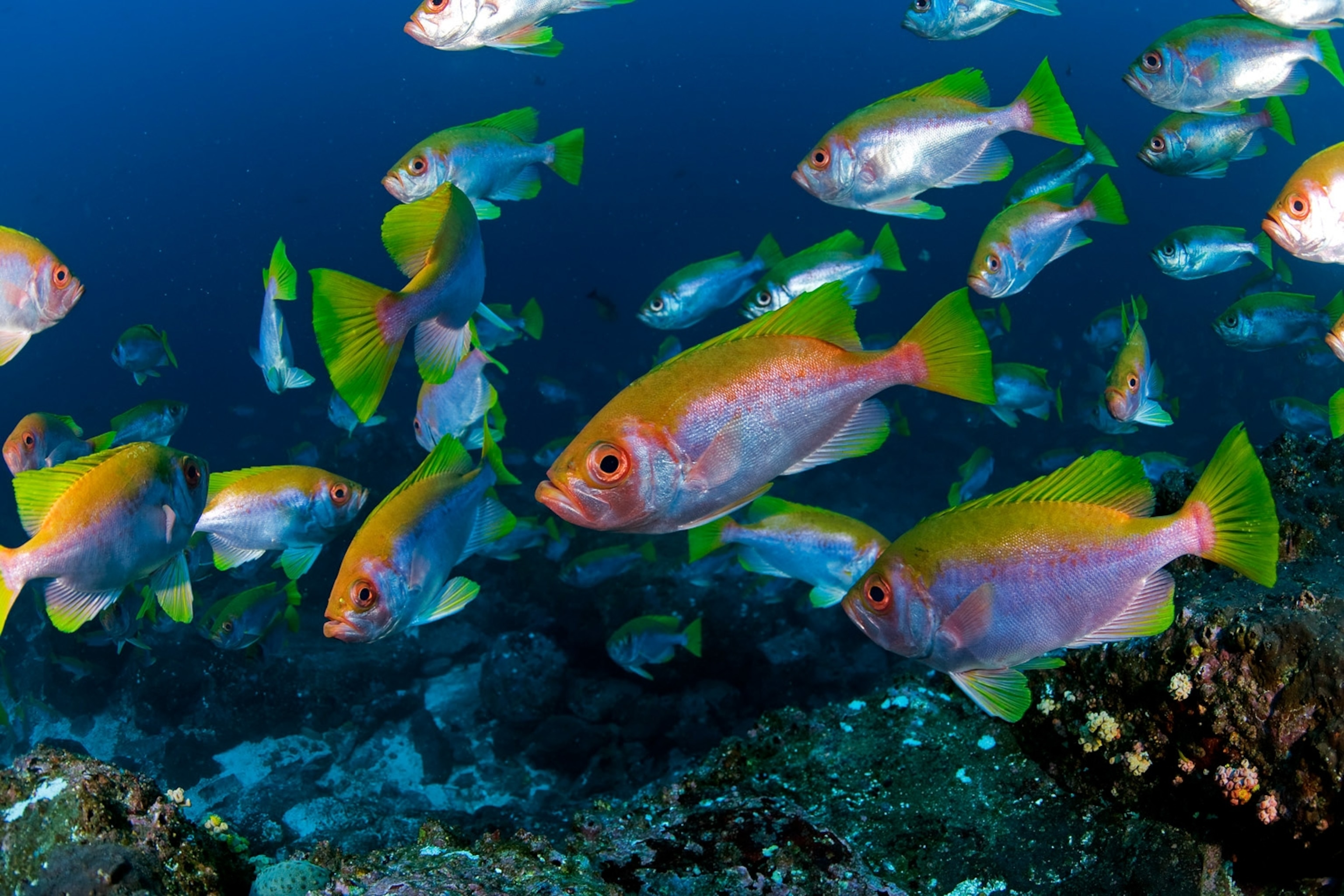 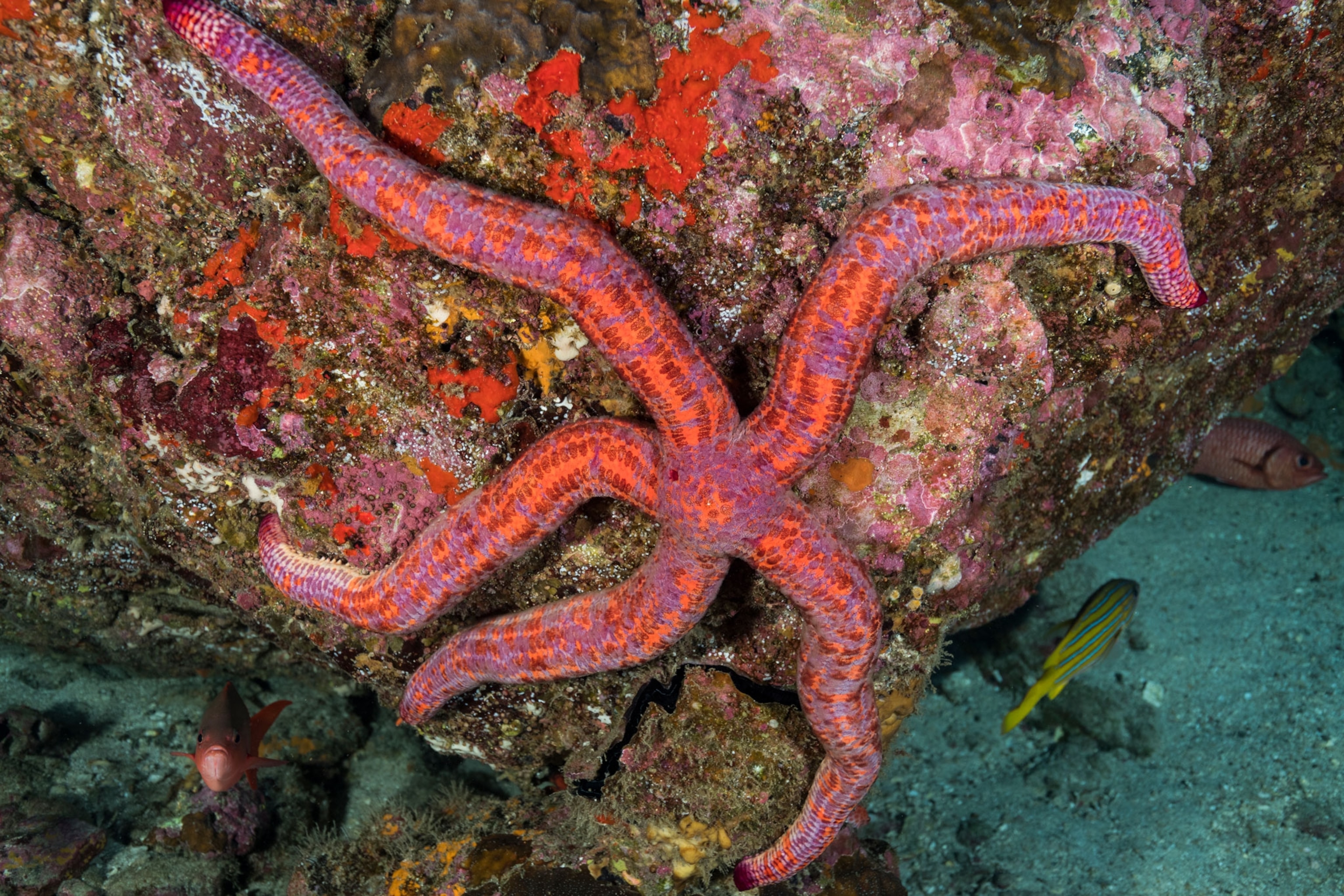 A tan sea star lays sprawled on rock above the seafloor.
Photo by Nick Hawkins, Naturepl.com 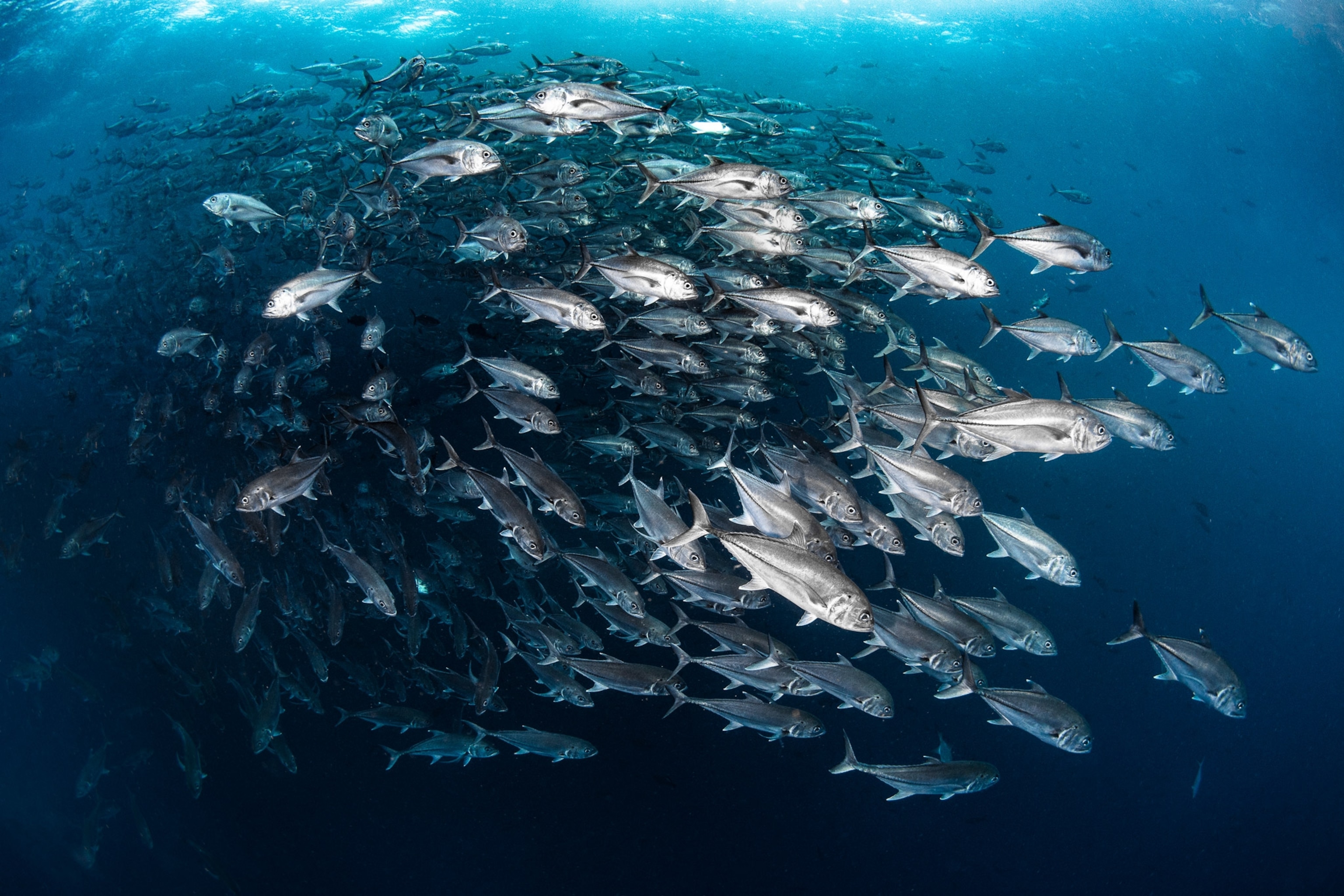 A school of bigeye trevally in deep water off Cocos Island.
photo : Greg Lecoeur, NatGeo image collection
An environmental gold mine
At the heart of Costa Rica’s newly expanded reserve is “Isla de Coco”—also known as Treasure Island (and thought to have inspired the 1883 book).
It’s remote–more than 350 miles off shore, and unpopulated, though in the 17th century it was visited by pirates who supposedly hid an infamously pillaged loot known as the “Treasure of Lima” that today could be worth $1 billion.
It’s never been found.

With it’s tropical rainforests and jagged, green mountains, some say the island inspired the setting for Jurassic Park.

As the southernmost extension of North America, the island sits in the crook of a current called the North Equatorial Countercurrent, which is at an oceanic confluence of mating, migration, and feeding.
The nine-square-mile island is just the visible tip of a line of submerged volcanoes that tower over the ocean floor and host an explosion of marine life.
At least three species of birds, two fish, and two reptiles can be found nowhere else on Earth.
That’s in addition to the more than 200 different plants and fish, 400 insects, 100 birds, and whales, dolphins, and sea lions that find refuge in the park.
It’s especially rich in sharks—home to 14 different species, three of which are endangered. 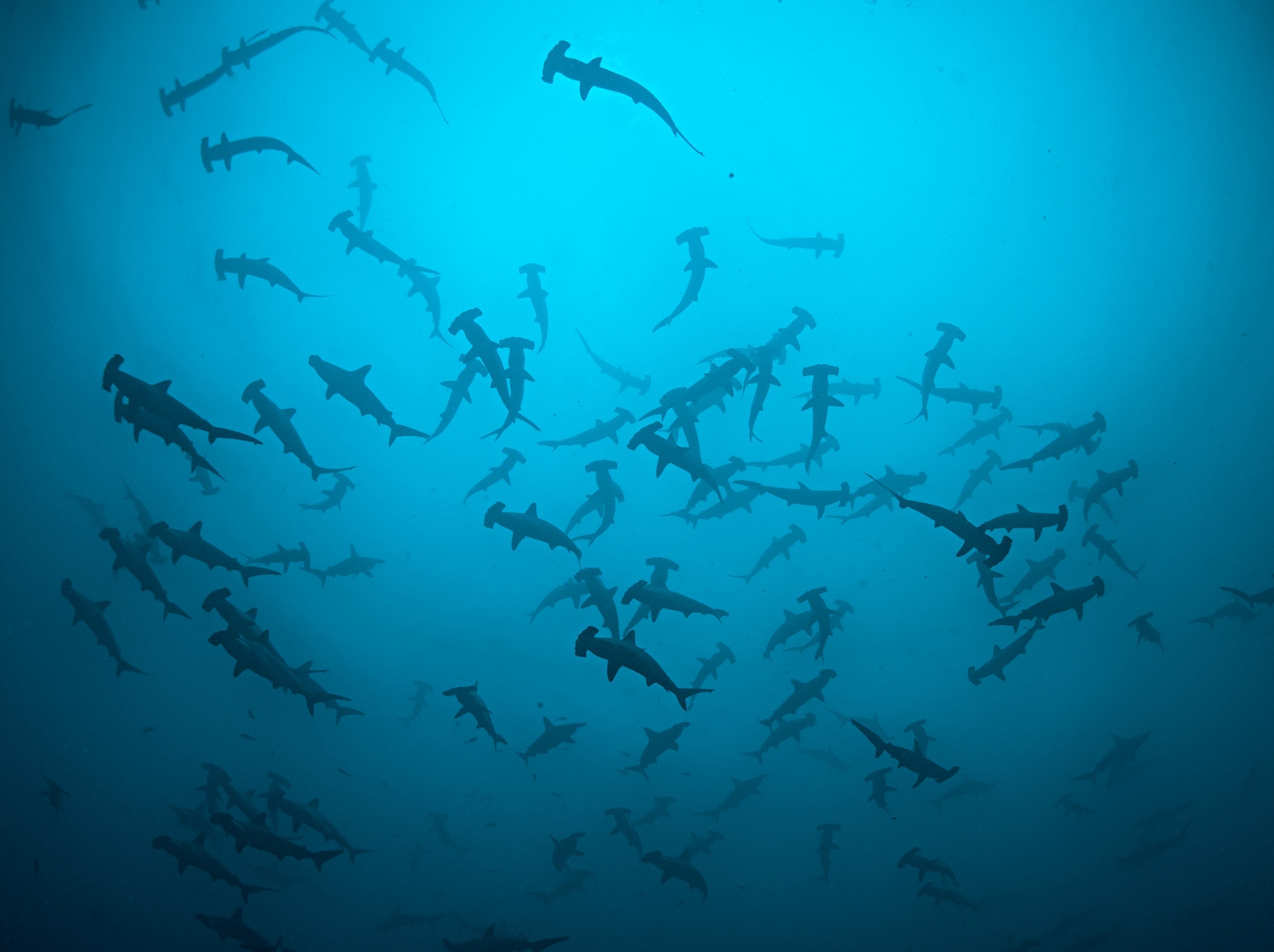 A school of scalloped hammerhead sharks swim in blue ocean.
The waters surrounding Cocos Island are a refuge for sharks often hunted for their fins.
Photo : Enric Sala, Nat. Geo Society
“It’s known as the shark island,” says Carlos Manuel Uribe, president of Friends of Cocos Island, an environmental group started by former Costa Rican president Rodrigo Carazo Odio in 1994.
“The first time I jumped into the water, I saw myself surrounded by sharks.
There’s such biodiversity all over you.”
Animals and plants of all different sizes are tucked inside its coral reefsand caves; Cocos Island has some of the tropical world’s densest biomass, a scientific term for living organisms.
While the region has been legally protected by Costa Rica for 39 years and has been a UNESCO world heritage site since 1997, a 2009 survey by National Geographic environmental advocacy group Pristine Seas, led by Sala, found that the species populating the area were being threatened by nearby fishing vessels.

A subsequent National Geographic documentary was produced about the region’s biodiversity and fishing threats, and christened Cocos Shark Island.
The team found that the unprotected seamounts encircling the island were littered with fishing lines.
The region’s waters are full of lucrative tuna, its sharks are targeted by poachers, and a 2018 report by a local environmental group found that illegal fishing was a significant and growing threat.

“It’s very important to give clear signals to illegal fishers that there will be more control and monitoring of the ocean,” she says.
“For this reason expansion was very important because we can increase control and monitoring.”
While the larger Bicentennial Managed Area will have managed fisheries—the details of which are a work in progress—fishing in the smaller Cocos Island park will be banned.
Globally, just under 3 percent of oceans are strictly protected by bans on fishing or other “extractive” industries like mining. A frogfish, disguised as its rocky seafloor perch, lays in wait for a potential meal.
The fish can change texture and even color to blend with its surroundings.
It can also lure potential prey with a fleshy “fishing rod,” complete with a wormlike lure.
Photo : Enric Sala, Nat. Geo Society
Good for the environment, good for people
At the November UN climate conference in Glasgow, where world leaders met to negotiate policies to curb climate change, Costa Rica, Panama, Colombia, and Ecuador agreed to protect 193,000 square miles (500,000 square kilometers) of the Eastern Tropical Pacific, the corner of the Pacific Ocean between North and South America.

In addition to conserving habitats in local waters, the agreement aims to protect the migratory routes followed by sharks, whales, sting rays, and turtles.
Already, Colombia has announced it will expand its marine reserves, as will Ecuador, home to the famous Galapagos Islands.
While announcements have been ambitious, Meza says more work will be needed to ensure these marine reserves are more than just “paper parks,” parks where protections aren’t actually enforced.

“We have to be aware that what we’re doing … is creating a paper park,” says Uribe.
“Our next goal is to go from a paper park to a well controlled and protected area.
For that we need funding and to use up-to-date satellite surveillance to intercept illegal fishing.”
Uribe says the park will need a large endowment, presumably from foreign donors.
Meza roughly estimates that the government will need around $10 to $15 billion for the next five years alone.
But according to Meza, Costa Rica’s economic future lies in protecting its resources, and the new marine reserve is part of what she calls the country’s new blue economy.
Studies done on shark diving tourism in Florida and Palau estimate that over time a shark is worth more when it’s alive, viewable to divers, than dead, on a dinner plate.

“When tourists come to Costa Rica, they want to see nature.
With these protected areas, we have been able to develop different businesses,” she says, noting that eco-tourism encourages everything from diving tours to car rentals and restaurant traffic.
Costa Rica has already reversed deforestation, pledged to reach net-zero emission status by 2050, and is now looking for pathways to electrify vehicles and retrofit buildings—all part of Meza’s vision for a new, green economy.
She hopes to extend that to businesses operating around the new marine reserve, paying fishers to operate sustainably, similar to how the country pays landowners to protect their forests.

“Ocean conservation is good for business, good for the environment—it's good for people,” she says.
“Working for the conservation of the ocean is a critical part of the climate agenda.”