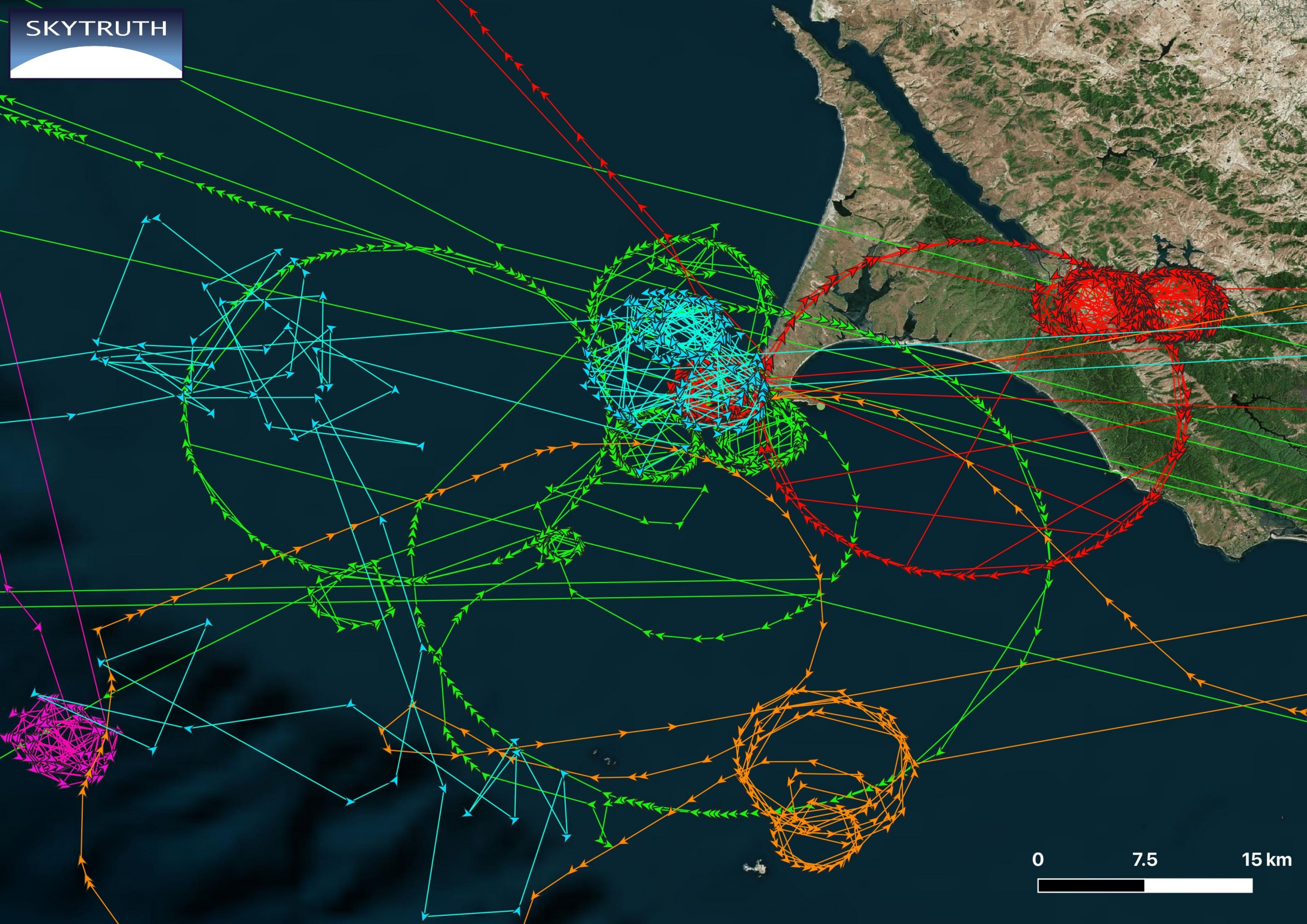 AIS tracks from a number of vessels have appeared circling over Point Reyes near San Francisco even though the ships can be confirmed to be thousands of miles away.
False circling tracks from five vessels are shown here.
AIS data courtesy of Global Fishing Watch / Orbcomm / Spire.

From Maritime Executive by Dona Goward

The locations of twelve ships as reported by their Automatic Identification Systems (AIS) were thousands of miles in error.
Most were displayed as circling an area northwest of San Francisco according to the environmental non-profit SkyTruth.

The circling phenomena has been previously observed in GPS-based reporting systems for fitness trackers in China and Iran, and for shipboard systems near a variety of Chinese ports.
In all those cases, though, it was clear that the real location was fairly nearby the false and circling locations. 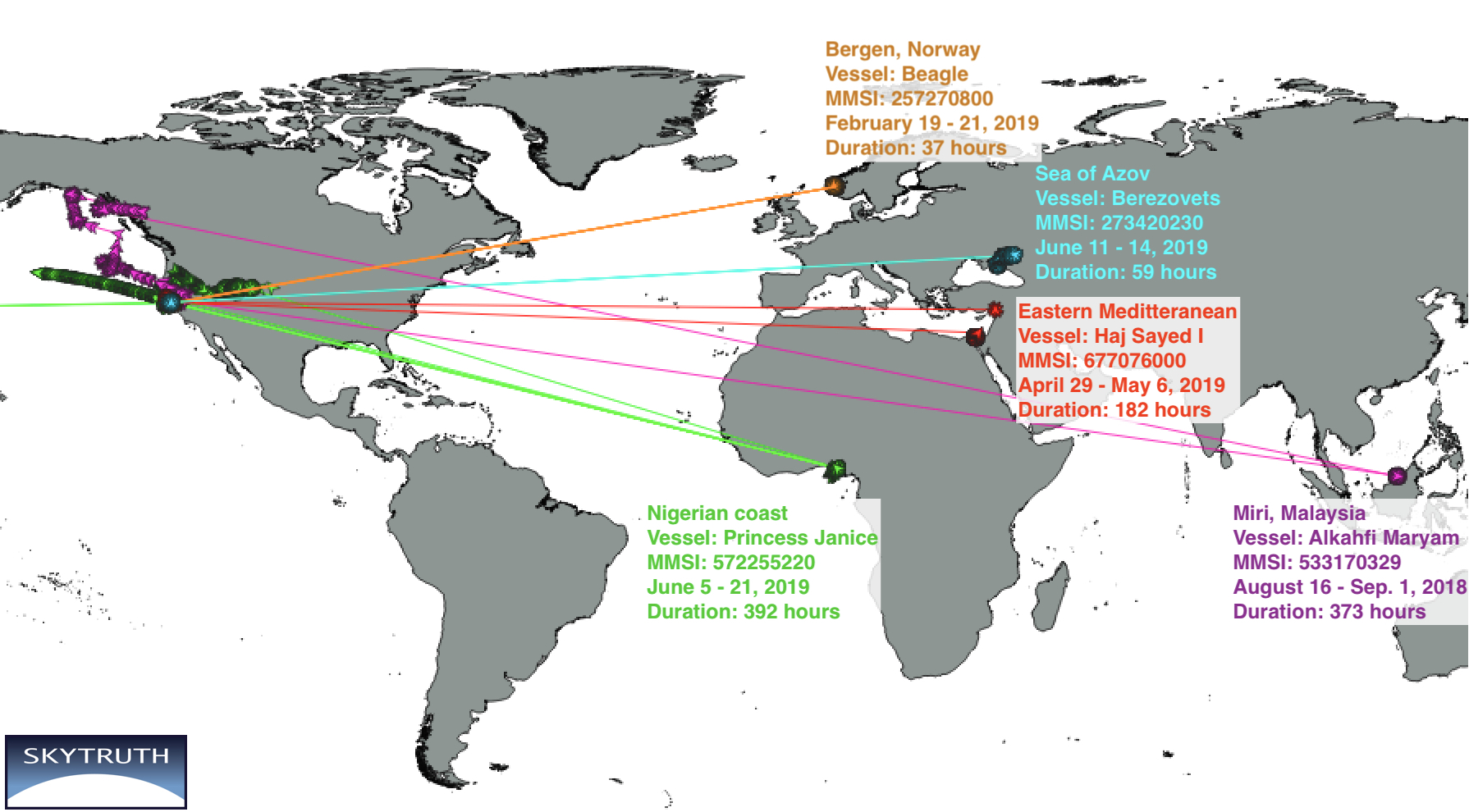 The colored lines show AIS tracks from five of the ships whose broadcast positions jumped suddenly to Point Reyes, California, northwest of San Francisco.
The time of the tracking disruption varies from less than one hour for one vessel to about two weeks for some others.
Two of the vessels (Princess Janice and Alkahfi Maryam) also have tracks appearing over land in North America.
The reason for this displacement is unknown although some of the vessels are in areas where GPS disruption has been reported (Eastern Mediterranean and Sea of Azov).
AIS data courtesy of Global Fishing Watch / Orbcomm / Spire.

In the most recent observations, the real locations of the ships were thousands of miles away.
Literally on the other side of the globe in most cases.

These findings were briefed at the annual meeting of the Resilient Navigation and Timing Foundation on the 5th of May.
The researcher, Bjorn Bergman of SkyTruth, said that he was able to verify the vessels’ approximate true location by examining the field of view of the satellite receiving the AIS position reports.
A satellite that could only see the Gulf of Guinea in West Africa, for example, received AIS information that placed the vessel offshore of Pt Reyes in northern California.
The vessels’ true locations were also confirmed by their position reporting before and after the “displacement” events. 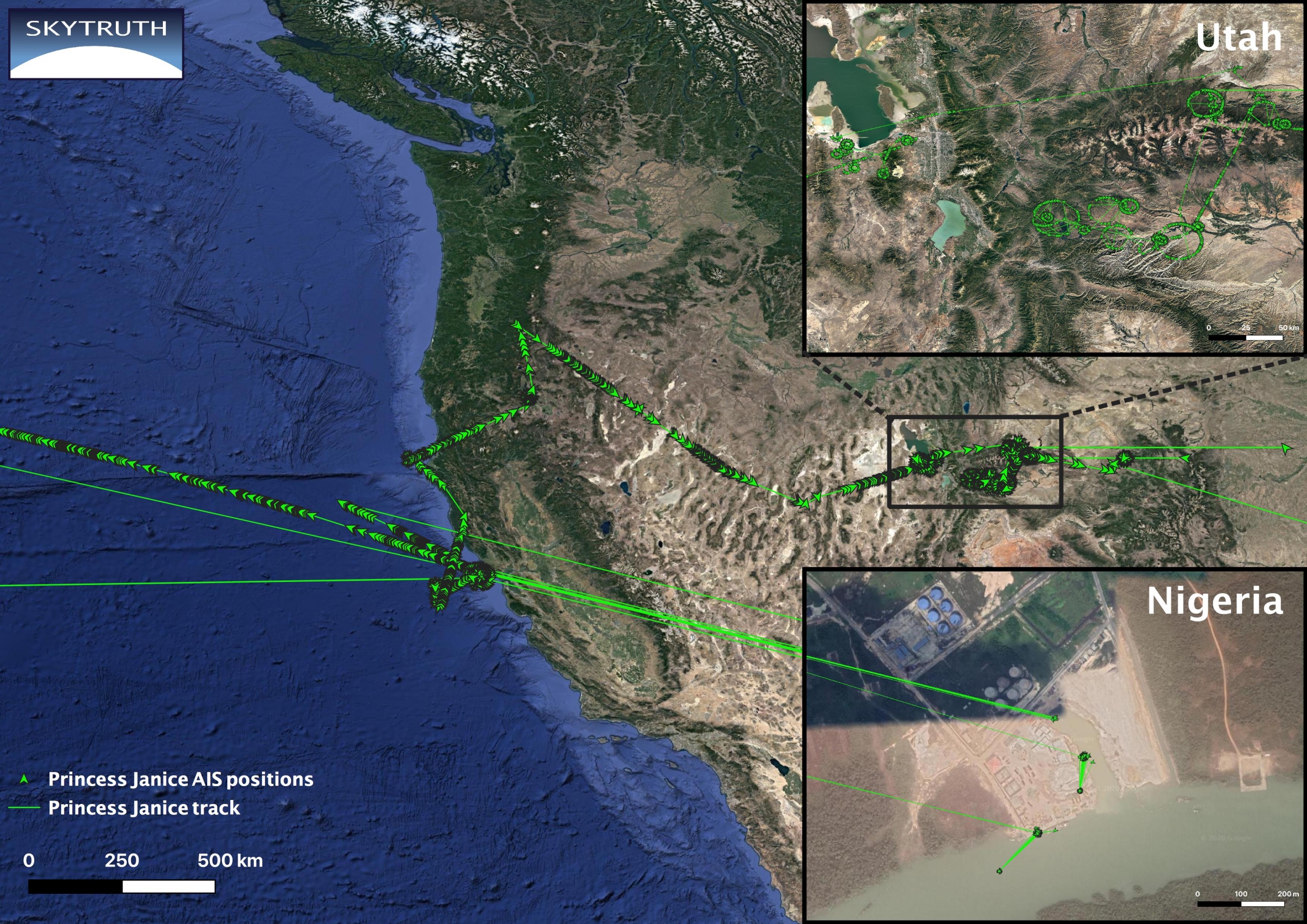 Broadcast AIS positions from Princess Janice.
The track makes multiple jumps between a real location in an oil terminal on the coast of Nigeria (inset lower right) and false positions over the United States.
Over two weeks in June 2019 the false track initially circles over Point Reyes northwest of San Francisco before veering over the Pacific and over the interior of the United States.
More circling is seen around Salt Lake City Utah (inset upper right).
AIS data courtesy of Global Fishing Watch / Orbcomm / Spire.

When asked at the briefing if this was the result of GPS spoofing or some fault in the vessels’ AIS system, Bergman replied that he was uncertain.
It is fairly clear that previous vessel “circling” incidents in China were some form of GPS interference.
GPS-based fitness tracker reporting was similarly affected in the same area and at the same time.
There are, as of now, no similar supporting data for these long-range maritime displacement and circling events.

Analysis is also hampered by the low number of vessels involved.
Bergman has only found twelve instances of this kind of behavior.

Princess Janice broadcasts an AIS track over Point Reyes near San Francisco and over the Western United States from June 5 – 21, 2019 (see Image 3).
Analysis of the footprints for the satellites receiving these positions demonstrates that the vessel was actually within a region on the central Nigerian coast and adjacent Gulf of Guinea.
Frame 1: Location over the Earth’s surface (red dots) of satellites receiving false position messages.
Frame 2: Extent of satellite footprints for AIS reception (large red circles).
Frame 3: Density of satellite coverage overlap, areas of increasing density shown as Blue → Green → Yellow → White.
Frame 4: Area where all satellite footprints overlap (maximum coverage) shown in white.
The white shaded region on the central Nigerian coast contains the true location of the Princess Janice during the period when the vessel was broadcasting a false location track.
Analysis was done in Google Earth Engine using approximate satellite footprints of 5,000 km (3,100 miles) diameter. 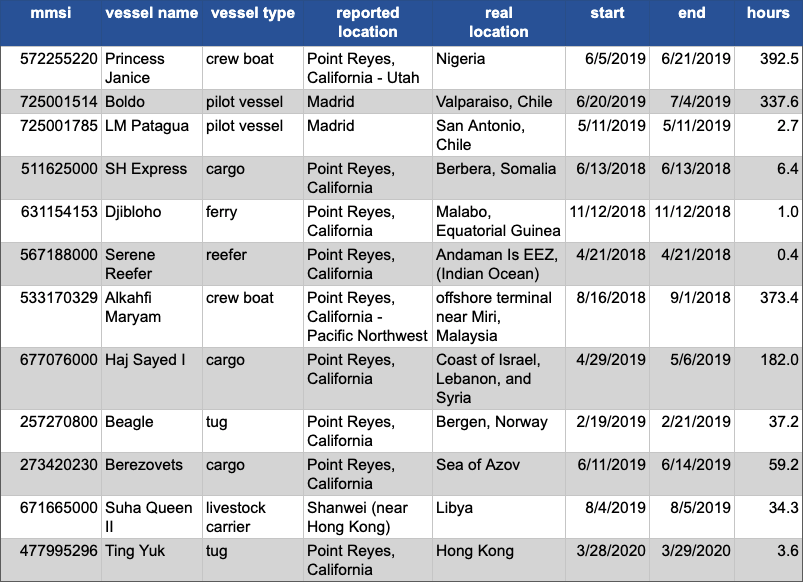 Further deepening the mystery is that the vessels are of much different types and operations.
Pilot boats, work boats, tugs, cargo, and passenger vessels have all been involved.
And these vessels have been located in every region of the world save North America.

The length of these disruptions has also varied greatly.
The shortest recorded was a reefer ship for less than half an hour.
A crew boat was “displaced” for over 16 days.

Most of the vessels reported circling positions off the coast of Northern California, though two were displaced to Madrid, one to the vicinity of Hong Kong and another to the Chinese city of Shanwei.
The vessel impacted for the longest time first reported a false position offshore of northern California.
Over the following days the false location drifted almost a thousand miles to the east moving inland as far as Utah. 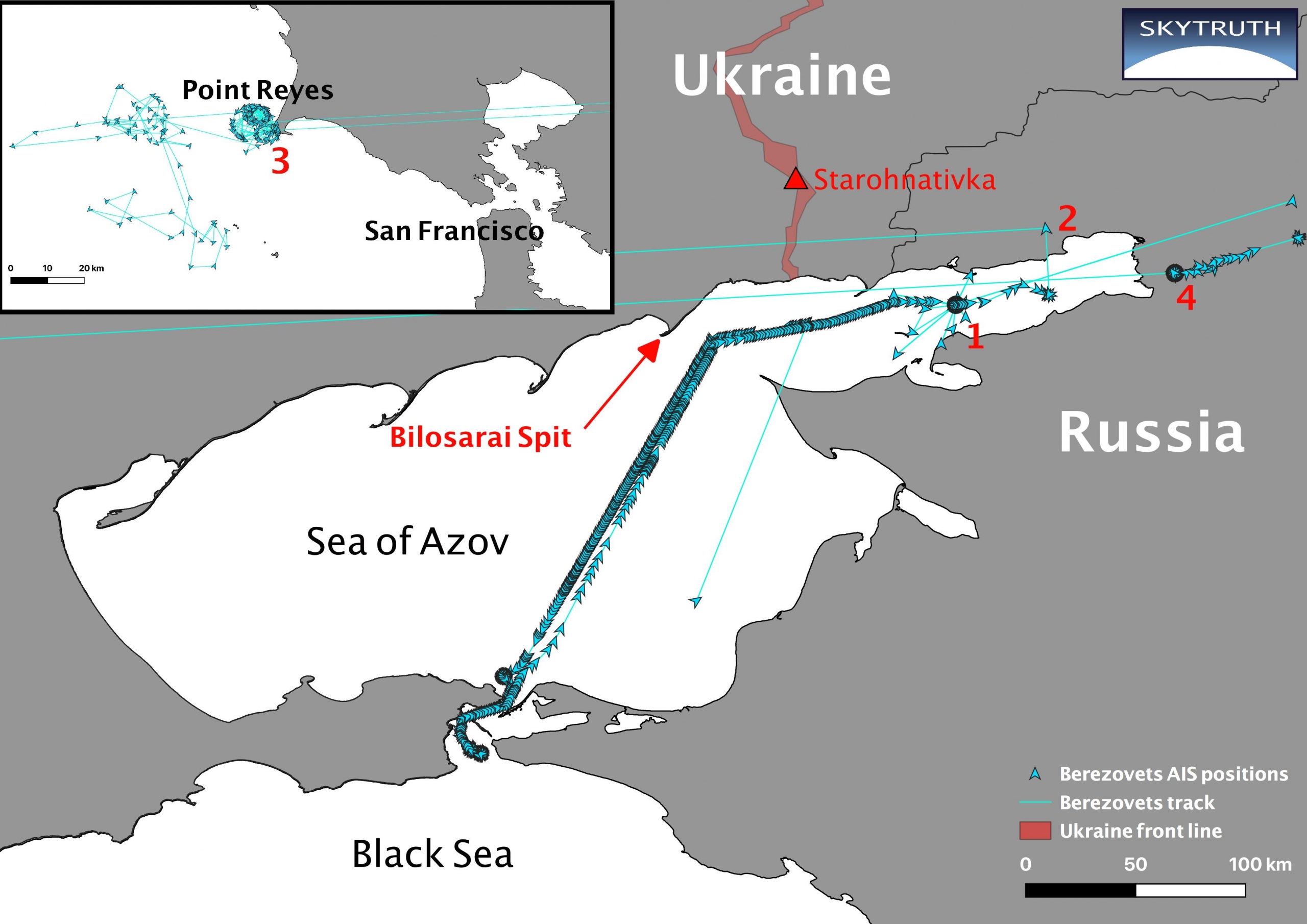 The Russian flagged cargo ship Berezovets transits through the Sea of Azov in June 2019 and has its AIS track jump suddenly to Point Reyes near San Francisco (inset).
Incidents of documented GPS disruption occurred in March 2019 east of the Bilosarai Spit and in July 2019 in the city of Starohnatvka.
AIS data courtesy of Global Fishing Watch / Orbcomm / Spire.

Bergman openly admits that he is at a loss to explain this phenomenon.
It seems to be related to GPS and the kind of “circle spoofing” previously observed in China and Iran.
Yet the lack of much commonality between the vessels and incidents makes any further deductions or inferences difficult.

For now, it remains a true mystery.
The RNT Foundation is encouraging anyone with insights or ideas to send them to inquires@RNTFnd.org to be shared with Mr. Bergman and other analysts.
Mr Bergman has also recently posted a short paper on these instances on SkyTruth’s website

A video of Bergman’s presentation at the RNT Foundation’s annual meeting is available below.