The world may lose half its sandy beaches by 2100. It’s not too late to save most of them

From The Conversation by John Church

For many coastal regions, sea-level rise is a looming crisis threatening our coastal society, livelihoods and coastal ecosystems.
A new study, published in Nature Climate Change, has reported the world will lose almost half of its valuable sandy beaches by 2100 as the ocean moves landward with rising sea levels.

Sandy beaches comprise about a third of the world’s coastline.
And Australia, with nearly 12,000 kilometres at risk, could be hit hard.

This is the first truly global study to attempt to quantify beach erosion.
The results for the highest greenhouse gas emission scenario are alarming, but reducing emissions leads to lower rates of coastal erosion.

Our best hope for the future of the world’s coastlines and for Australia’s iconic beaches is to keep global warming as low as possible by urgently reducing greenhouse gas emissions.
Losing sand in coastal erosion

Two of the largest problems resulting from rising sea levels are coastal erosion and an already-observed increase in the frequency of coastal flooding events.

Erosion during storms can have dramatic consequences, particularly for coastal infrastructure.
We saw this in 2016, when wild storms removed sand from beaches and damaged houses in Sydney. 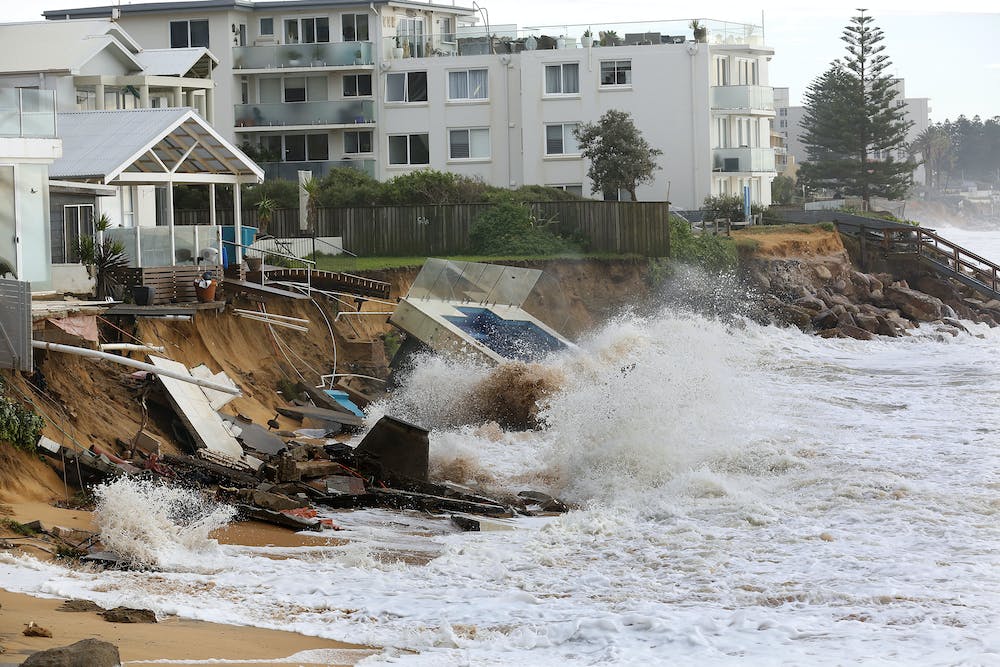 A swimming pool washed away from a beachside property after wild storms in Sydney in 2016.
AAP Image/David Moir

After storms like this, beaches often gradually recover, because sand from deeper waters washes back to the shore over months to years, and in some cases, decades.
These dramatic storms and the long-term sand supply make it difficult to identify any beach movement in the recent past from sea-level rise.

What we do know is that the rate of sea-level rise has accelerated.
It has increased by half since 1993, and is continuing to accelerate from ongoing greenhouse gas emissions.

If we continue to emit high levels of greenhouse gases, this acceleration will continue through the 21st century and beyond.
As a result, the supply of sand may not keep pace with rapidly rising sea levels.

Projections for the worst-case scenario

In the most recent Intergovernmental Panel on Climate Change (IPCC) report, released last year, the highest greenhouse gas emissions scenario resulted in global warming of more than 4°C (relative to pre-industrial temperatures) and a likely range of sea-level rise between 0.6 and 1.1 metres by 2100.

For this scenario, this new study projects a global average landward movement of the coastline in the range of 40 to 250 metres if there were no physical limits to shoreline movement, such as those imposed by sea walls or other coastal infrastructure.

Sea-level rise is responsible for the vast majority of this beach loss, with faster loss during the latter decades of the 21st century when the rate of rise is larger.
And sea levels will continue to rise for centuries, so beach erosion would continue well after 2100.

What happens if we mitigate our emissions

The above results are from a worst-case scenario.
If greenhouse gas emissions were reduced such that the 2100 global temperature rose by about 2.5°C, instead of more than 4°C, then we’d reduce beach erosion by about a third of what’s projected in this worst-case scenario.

Current global policies would result in about 3°C of global warming.
That’s between the 4°C and the 2.5°C scenarios considered in this beach erosion study, implying our current policies will lead to significant beach erosion, including in Australia.

Mitigating our emissions even further, to achieve the Paris goal of keeping temperature rise to well below 2°C, would be a major step in reducing beach loss.

Why coastal erosion is hard to predict

Projecting sea-level rise and resulting beach erosion are particularly difficult, as both depend on many factors.

For sea level, the major problems are estimating the contribution of melting Antarctic ice flowing into the ocean, how sea level will change on a regional scale, and the amount of global warming.

The beach erosion calculated in this new study depends on several new databases.
The databases of recent shoreline movement used to project ongoing natural factors might already be influenced by rising sea levels, possibly leading to an overestimate in the final calculations.

Regardless of the exact numbers reported in this study, it’s clear we will have to adapt to the beach erosion we can no longer prevent, if we are to continue enjoying our beaches.

This means we need appropriate planning, such as beach nourishment (adding sand to beaches to combat erosion) and other soft and hard engineering solutions.
In some cases, we’ll even need to retreat from the coast to allow the beach to migrate landward.