How 'dark fishing' sails below the radar to plunder the oceans

It is estimated one in five fish brought to markets is illegally caught, often by a so-called “dark” fishing fleet.
This refers to vessels that switch off their satellite tracking to hide their activities in far-flung parts of the world’s oceans.
Now a Greenpeace investigation has uncovered the scale of the problem and the need for greater ocean protection.

From Al'Jazeera by Nick Clark

Billions of dollars in illegal and unregulated fish supplies are mixed with legal catches and smuggled into the market.

In September last year, the Greenpeace campaign ship Arctic Sunrise was scanning the mid-Atlantic ocean, thousands of kilometres from anywhere.
On board, investigators were looking for vessels that were doing their best not to be found.

One of them was Taiwanese fishing boat, the Hung Hwa - a longliner capable of running baited lines more than 100 kilometres (62 miles) in length, targeting mainly tuna species.
It had turned off its satellite locator, the Automatic Identification System (AIS).

A fishing vessel might do that to avoid competition from other boats or to prevent attack by pirates.
But often it coincides with a transhipment at sea - the offloading of a fishing boat's catch onto what is known as a reefer, or a giant refrigerated cargo ship.
The transhipment loophole

Transhipping is the lifeblood of the distant water fishing industry.
It allows fishing boats to stay at sea without returning to port for months because they can offload their catch on to what are effectively colossal floating freezers.

As part of the process, the fishing vessels are refuelled and resupplied by the reefers, allowing them to get straight back to doing what they do - catching fish relentlessly.

The problem is that transhipping fish mid-ocean presents a major loophole in monitoring fishing activities.

By offloading at sea, vessels are able to smuggle illegal, unreported and unregulated (IUU) catches into the market by mixing them with legal catches.

This makes it exceedingly difficult to detect fraud or trace a shipment back to the vessel that caught it.
It also allows entire fleets to operate out of sight, where they can hide illegal catches and operate without returning to port.

On the bridge of the Arctic Sunrise, the Greenpeace investigators were scrutinising the navigation screens, following the satellite tracks of vessels in their sector of the ocean.
Their suspicions were raised when a Taiwan-owned, Panama-registered reefer vessel called the Hsiang Hao, appeared to be sailing slowly in a loitering pattern - effectively circling for several hours.

There was no other vessel present, at least none displaying AIS.

But the next day the Arctic Sunrise intercepted the Hsiang Hao and there, alongside, was the Hung Hwa, still "dark" - not transmitting its satellite location.

And from the Hung Hwa's hold, dozens upon dozens of deep-frozen tuna and shark - frosted and steaming in the humid equatorial air - were being hoisted on to the reefer ship.

Greenpeace’s lead investigator, Sophie Cooke, said there are many reasons vessels may not want to appear on satellite.

"Some of them might be legitimate," she said.
"But a lot of the time, it's because they want to avoid detection or want to go into areas they are not allowed.
Or they want to meet up with another vessel at sea and do not want to be seen."

"If ships turn off their satellite tracking it means no one sees what's happening out at sea and it makes the high seas a black hole of fishing activity," Cooke added. 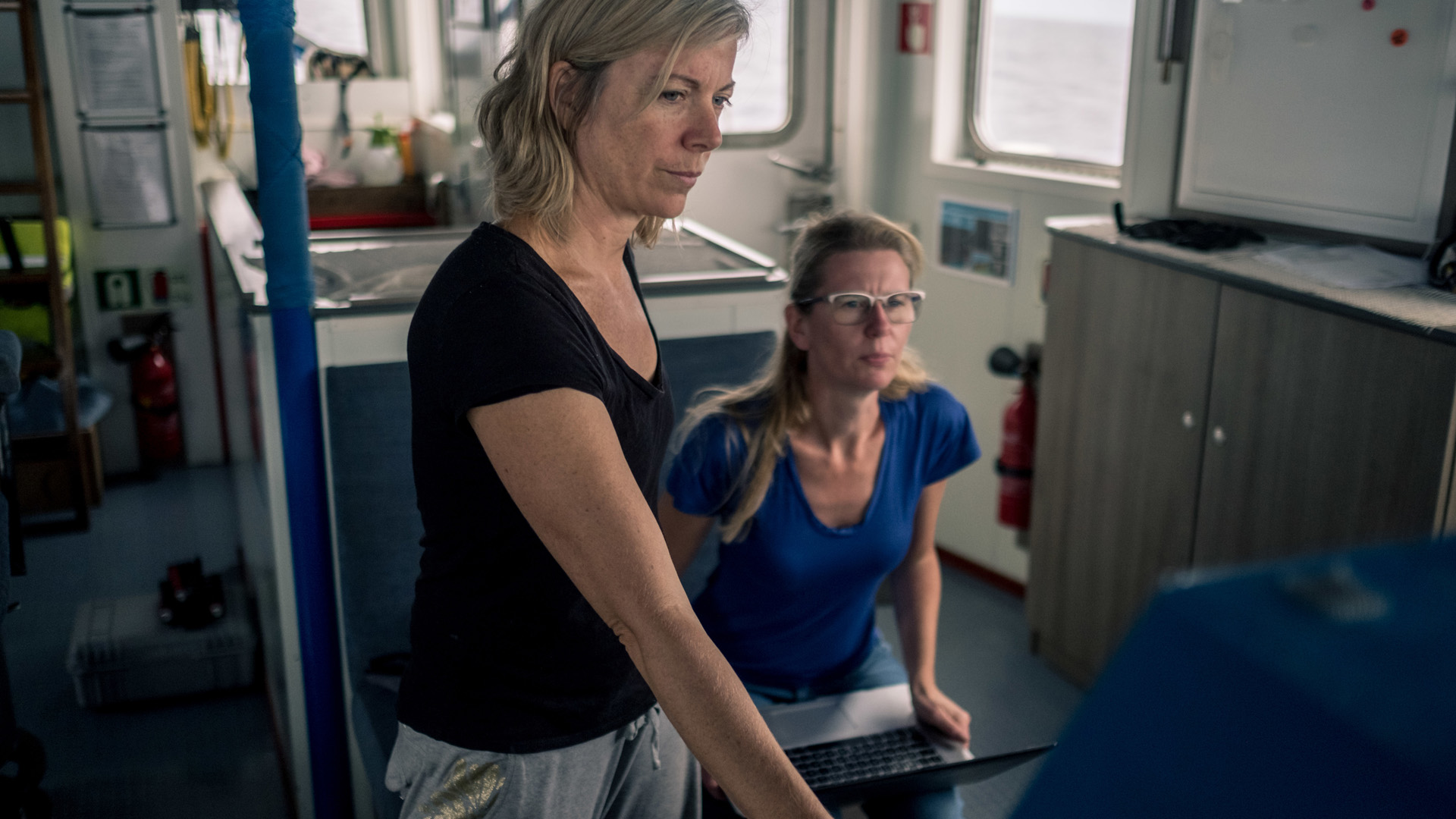 In 2017, Greenpeace set out to understand the scale and misuse of AIS by the global reefer industry.
They investigated the movements, behaviour and owner structures of more than 400 reefers identified as being capable of taking part in transhipments at sea.

In the resulting report just published, the investigating team said what was most striking was how much transhipment is happening between fishing vessels that have gone dark because of their involvement in illegal fishing.

"It’s very hard to know the exact amount of IUU fishing activity that’s going on," said Will McCallum, Greenpeace's head of oceans, "but what we do know is that transhipment allows vessels to stay far out at sea where they are out of scrutiny, out of mind and out of sight."

McCallum said they can track exactly where the global fleet of refrigerated cargo vessels is operating.

"For example, we can see they're in the southwest Atlantic, which is a part of the world where there is very little, to the point of almost no fisheries management for a lot of fishing vessels," he said.

The Greenpeace report highlights how the global fleet of reefers hides behind complex ownership structures and "flags of convenience" that reduce accountability and transparency.

The single most active fleet of reefers involved in transhipments on the high seas is owned by the Greek shipping magnate Thanasis Laskaridis, whose vessels ply the seas the world over, from the North Atlantic to the South Pacific.

Investigators also discovered that because transhipment allows fishing boats to spend months or even years at sea without returning to port, it leaves crews open to abuse.
Being so far from scrutiny and the prying eyes of port inspectors for so long raises the possibility that boat owners can effectively enslave their crew.

Many cases have been documented, the report said, of fishermen being forced to work exhausting shifts in unsafe conditions, having their pay withheld and documents confiscated.
There are even reports of crew being denied access to clean food and drinking water. 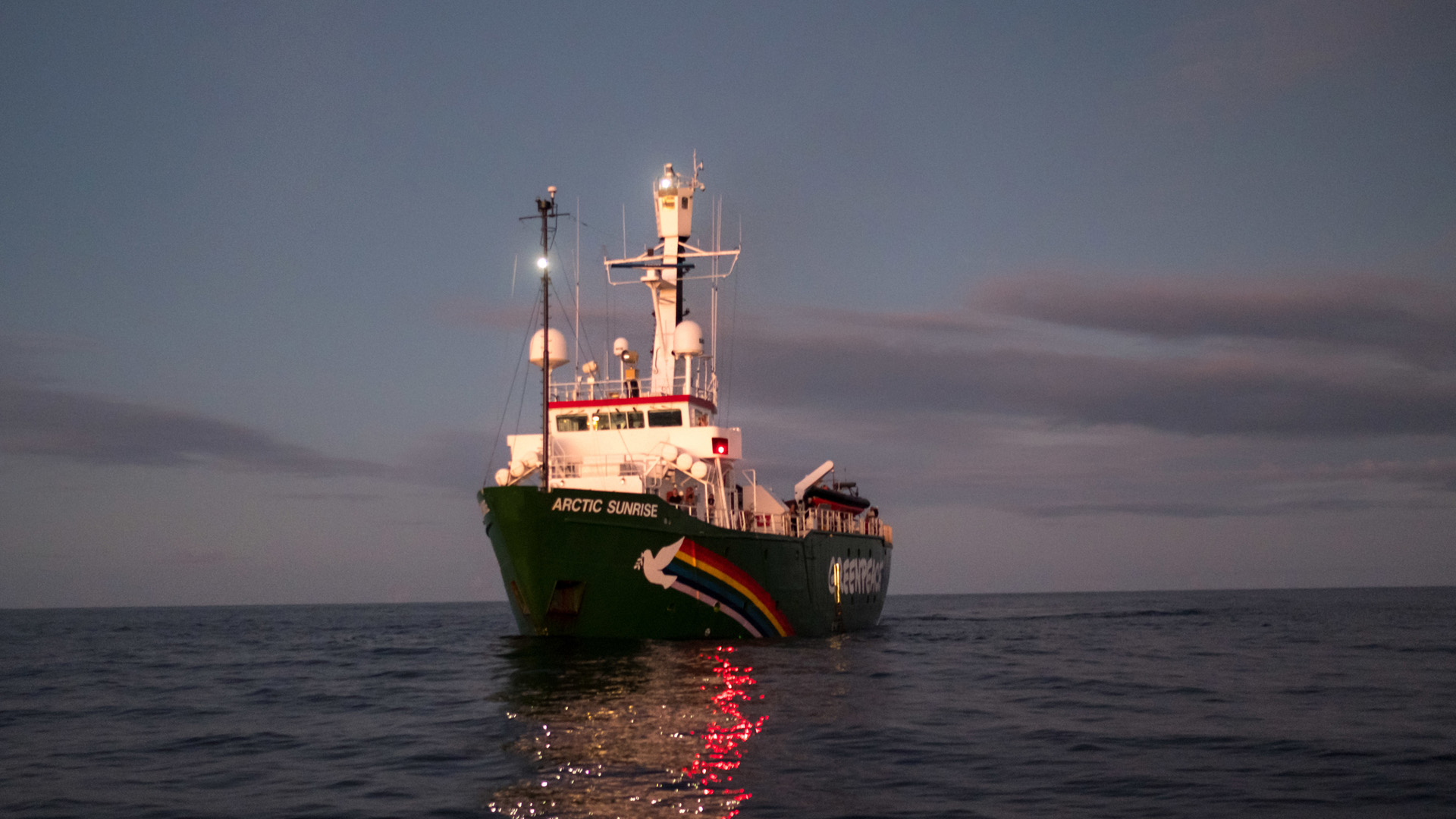 "Reefers should have observers on board to track where the catch is coming from and make sure we are not muddying the global supply chains." The ultimate goal would be for transhipment at sea to be phased out.

There is no question of the severity of the grave assault that is taking place on our oceans and everything that lives in it.
Overfishing is wreaking havoc on marine life while threatening the food security and livelihoods of billions of people.

This year will be a significant one for the world - from the crucial climate conference in Glasgow in November to a landmark biodiversity summit in October in China.
But, for the Greenpeace oceans team, all eyes right now are on New York in March when maximum effort is being focused on the implementation of a global ocean treaty at a vital UN conference.

"We need a strong ocean treaty," said McCallum.
"We need a single holistic way to manage these international waters, that are so far from land they’re very hard for a single country or group of countries to monitor and regulate.
So a global ocean treaty would plug some of the governance gaps that we are seeing at the moment."

The goal is to ensure 30 percent of the world’s oceans become off-limits to any kind of exploitation - from fishing to deep-sea mining.
And that way those far-flung waters that are often home to pristine ecosystems, would be better protected from the fleet that goes dark to pursue and dispatch its catch.