The self-propelling Eelume robot moves like a snake through the water
source : Kongsberg

From BBC by Zoe Kleinman

In the near future, ocean search-and-repair specialists won't need arms or legs, according to one vision.

In fact, they are destined to be much more slithery.
"We try to get people to move away from the word snake because it's seen as kind of scary but even I find myself all the time calling it a snake," says Richard Mills from marine tech firm Kongsberg.
If the idea of a swimming robot snake doesn't appeal, you might want to skip the next few paragraphs.
I first mentioned Eelume to a friend who asked me whether I would be allowed to have a swim with it.
I was secretly relieved that the answer was no.
What started as a university robotics research project in Norway 10 years ago, has become a commercial prototype - and it is unavoidably snake-like.
It's designed to inspect structures on the sea bed and carry out repairs, and is currently being tested on oil rigs.
The flexible, self-propelling, tubular device has a camera at each end and is kitted out with sensors.
Because it has a modular design, its parts can be switched to suit different tasks, with swappable tools including a grabber and cleaning brush. 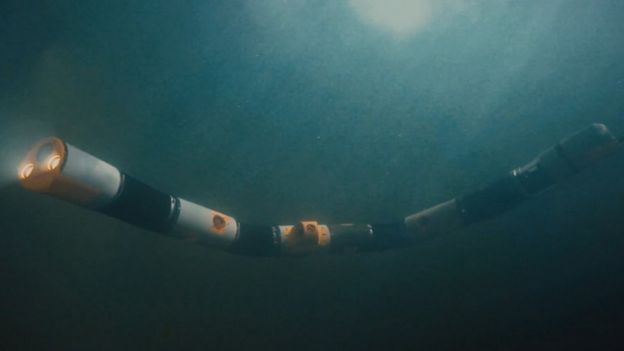 The design allows the robot to work in confined spaces that might be inaccessible to other vehicles, as well as to wriggle its body to stay in place in strong currents.
And because it is designed to connect itself to a seabed dock when not in use, it can be deployed at any time whatever the surface conditions.

It isn't yet on the market, but was recently on show at the Southampton's Ocean Business trade fair.
Future plans already include a cheap 3D-printed model and another which can operate in very deep water.
"Something like going inside the Titanic, where divers can't, is a great opportunity that we could look at in the future," said Mr Mills.
"We are only limited by imagination in where we can take this vehicle."


ASV Global is leading the development and deployment of autonomous boats in both military and commercial applications across the globe.

Just as driverless cars are causing excitement on land, autonomous boats are also making a splash.
"Unmanned systems allow you to focus on the data," said Dan Hook from UK firm ASV Global, which was also at the Southampton expo.
"You stay on board your ship in a warm, dry location, you can focus on the data and where to send the unmanned system next."
The firm's two autonomous vessels - which can also be operated via remote control - currently run on diesel generators rather than battery power.
"We're seeing increasing regulation on the types of engines we can use - it's a good thing to force you into the cleaner engines," he said.
"They are quieter and more efficient... but the future is electric, we're seeing it in cars, it's happening in our industry as well."

Batteries from the specialist battery-maker Steatite's have to function at low temperatures and high pressure, and power deep-sea devices for days at a time.
Lithium-sulfur battery tech, already in the sights of electric car makers, is set to be trialled on board the famous autosub trio collectively known as Boaty McBoatface later this year - and it will be a Steatite creation.
"Lithium-sulfur is the next generation from lithium-ion," said the firm's Paul Edwards.
"It's got a better energy density, so you get more energy for the amount of weight you are carrying."
But if you think that it is battery life that holds marine tech back, then think again.


Deep Trekker builds portable and easy to use submersible robots.

It is more likely to be your concentration span, said Sam McDonald, president of a Canadian firm called Deep Trekker.
The firm was demonstrating two remotely operated underwater vehicles (ROVs) - the larger of which was about the size of a small child.
Ms McDonald said that the operator would become tired before the ROV did.
"I need to take a break after three or four hours of running it," she said.
"You're looking at a screen the whole time, it takes a great deal of concentration.
"You're trying to hold position under the water, looking at infrastructure or watching tools or divers work, you're constantly moving your hands and eyes," she explained.
If that sounds exhausting imagine being in charge of a whole load of them at once. 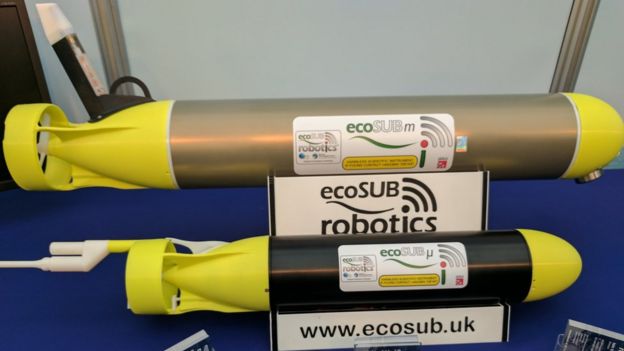 Return to sender... rewards will be offered for washed-up ecosubs

Planet Ocean was showing off the ecosub - a small, thigh-sized device that looks a bit like an old shell casing and is designed to "swim" in shoals, with each individual sub packed with different sensors to build up collectively a strong picture of the group's watery environment.
One "pilot" can oversee many simultaneously, and they are so small that each individual sub can only carry four or five sensors, said managing director Terry Sloane.
"If they bump into each other it's not a big disaster," he said.
"They only weigh 5kg [11lb] on land".
Keen to encourage recycling, Mr Sloane is prepared to offer a bounty for washed-up ecosubs that find their way to the beach - there's a hotline number on the casing for eagle-eyed beachcombers to call.
"We don't want to leave things floating around in the ocean, but it doesn't take many hours of searching for one to make it uneconomical to recover," he said.
"We expect people to recover them and claim a reward."