Lidar helps to illuminate the future of oceans 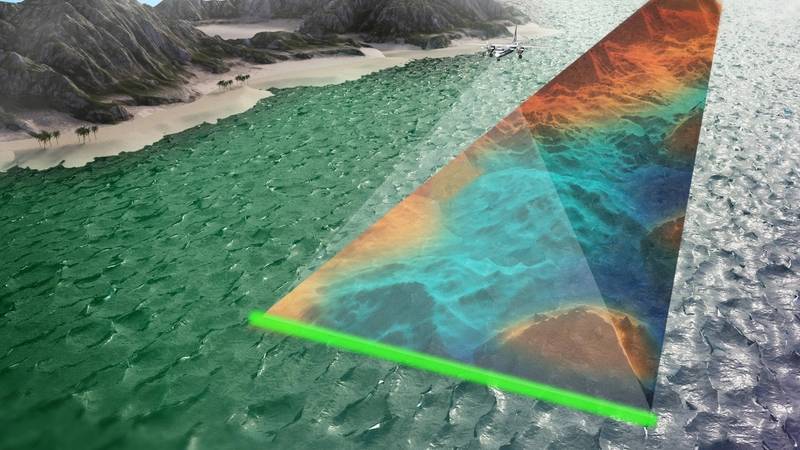 35kg RAMMS ALB sensor offers a unique combination of scanning capability (2ppm density & 3x Secchi penetration), and small form-factor.
© Fugro
From MarineTechnology by Celia Konowe
The statement that 80% of our world’s oceans remain unexplored is well known—and possibly, overstated.
Observance of United Nations World Oceans Day on June 8 underscored the deter-mination to better understand and protect our waters.
While limitations in the ocean still inhibit the same level of progress that we’ve achieved on Earth’s terrestrial surface, some of the same technology is playing a role in the game of marine catch-up.

Lidar, which stands for “light detection and ranging,” utilizes laser light to measure distances on Earth and produce 3D models of the surveyed area.
The technology is either topographic or bathymetric, employing a near-infrared laser for the former and a water-penetrating green laser for the latter.
Lidar data enables countless applications, including examining natural and manmade environments, transportation routes, and maintenance inspection.
In the marine world, lidar has gained a reputation for increasing our exploratory efforts and, more recently, for examining the coastal ecosystems, communities, and structures that grow increasingly sen-sitive to climate change and intensifying weather patterns.
Lasers: A Shore way to Protect the Coast

Velodyne Lidar, a lidar solutions company based in California, has recently partnered with Sea-bed B.V., a technical solutions group from the Netherlands, to help complete a lidar mobile mapping system.
With the goal of protecting sensitive shorelines through sustainable planning, Velodyne’s contribution is the Puck lidar sensor, which will complement Seabed’s existing map-ping technology.

“Velodyne produces technology to help machines ‘see’—the Puck can be considered the eyes of the application.
It collects real-time, surround view, 3D-distance and calibrated reflectivity measurements to detect potential hazards, even in a wide variety of lighting and environmental conditions, including in the dark, where cameras struggle,” Executive Director Europe Erich Smidt explained.
Velodyne’s Puck sensor will help provide holistic, above-water point cloud da-ta, including specific measurements of inshore, nearshore and inland waterways from up to 100 meters away, and is designed to be mobile and easy to use without specific training, saving both time and money in data collection.

The implications of this work are seemingly limitless.
Aside from conserving sensitive historic and marine environments, Velodyne’s lidar technology can be paired with a bathymetric echo-sounder to provide complete, above- and below-water 3D imaging.
This data can be used to assess bridges, piers, dams and other infrastructure, further helping sustainability planning, as well as navigation safety.
Sustainability, though, may be a growing cause. 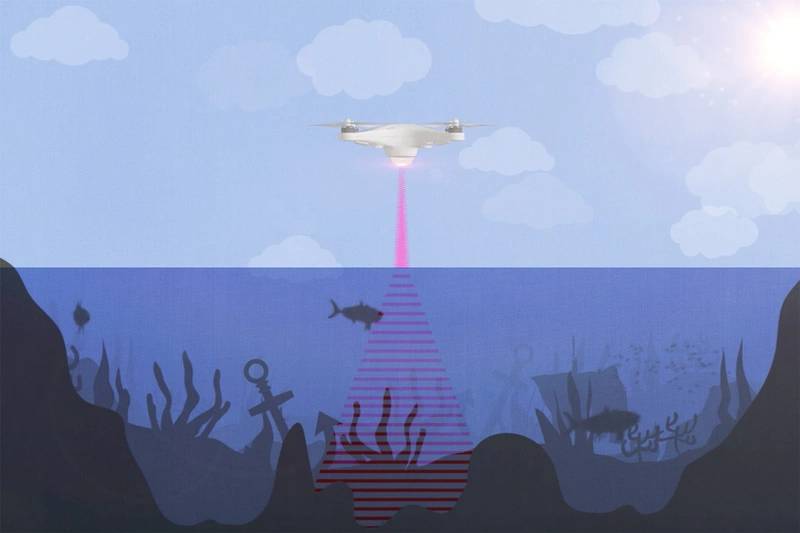 An artist rendition of Standford’s photoacoustic airborne sonar system operating from a drone to sense and image underwater objects.
© Kindea Labs
Fugro is also tackling the coastline protection head on.
For the first time in the UK (previous ap-plications have occurred in North American and the Caribbean), its Rapid Airborne Multibeam Mapping System (RAMMS) will be used to collect bathymetric lidar data.
Coastal flooding has become a concern due to rising sea levels and intensifying weather patterns and the Depart-ment of Agriculture, Environment and Rural Affairs (DAERA) in Northern Ireland has called for a study of the 763 km coastline.
“A recent report by The Lightsmith Group has highlighted costs of $167 to $357 billion a year by 2030 to tackle climate change in developed countries with an expected $119 billion of global costs annually linked to extreme weather events by 2040,” said Chris Boreland, Fugro’s business development manager for remote sensing and mapping solu-tions.
Unfortunately, this means that human-made and natural environments along coastlines will be at the forefront of climatic impact in the coming decades.DAERA’s hope is to create a baseline survey across Northern Ireland that will identify areas at highest risk of coastal erosion and flooding now and into the future.
The consequent 3D model will be a tool for policymakers and coastal managers alike.
“The issue is that the coastal envi-ronment, particularly the nearshore or ‘white ribbon’ region, is extremely challenging to sur-vey,” Boreland explained.
“Survey vessels can’t get close enough due to the shallow water and wave action, and it’s too dangerous for onsite surveyors to wade out.”

Fugro’s RAMMS sensor can be operated from a small aircraft or unmanned aerial vehicle to capture high-resolution data three times the depth of visual water clarity.
The system pulses rapid beams of light from the sensor, which travel to the ground or seafloor and are then re-flected back.
The returns are collected by the system and converted into a surface map of the ground or seafloor.
What makes RAMMS unique, Boreland explained, is that it uses a green la-ser.
“The light penetrates the water column and can return seafloor data to 3× Secchi depth, which means three times the penetration depth of natural sunlight in a given water column.”

RAMMS can also be combined with other remote sensing technologies for variety of imaging needs, bathymetric or topographic.
Additional applications include nautical charting, coastal and marine engineering, coastal zone management, and storm modelling.
Fugro hopes their work with DAERA is only the start: “The implications of this could be the roll-out of this technol-ogy across most of Europe’s coastline to help countries understand how erosion there will affect them in the medium-to-long term,” Boreland said.
Some scientists, however, are taking the capabilities of lidar a little farther. 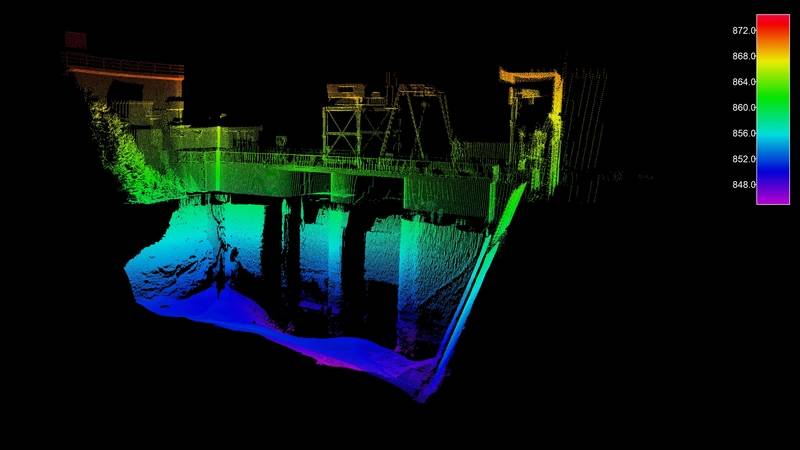 The abilities and scope of lidar applications have advanced significantly in recent years, provid-ing more technological solutions to climatic and other challenges faced by the marine industry.
Subsea exploration has remained a fascinating mission for humankind with most of our oceans remaining unexplored, despite technological advancements, due to crushing pressures, freezing temperatures, and pitch-black darkness.
One tactic to overcoming these limitations, however, may use more than just lidar.

Engineers at Stanford University have developed an aerial solution for underwater imaging by combining light and sound, each filling in the gaps created by the other.
Electromagnetic radia-tion (such as visual light, microwave, and radar signals) loses energy when passing from the air to the water and vice versa; soundwaves struggle in a similar sense.
The hybrid Photoacoustic Airborne Sonar System (PASS) leverages the best of both, with the hope of eventually conduct-ing largescale aerial marine surveys that are comparable to those of Earth’s terrestrial land-scapes in terms of feasibility and detail.

PASS works to circumvent the air-water interface, first firing a laser from the air that is ab-sorbed at the water’s surface.
As the laser is absorbed, it generates ultrasound waves that re-flect off underwater structures, whether natural or manmade, and then travel back to the sur-face.
The returning soundwaves, recorded by transducers, are still sapped of some of their en-ergy upon breaching the surface, but less than in sonar-only applications since energy is pre-served by generating the soundwaves with a laser.
Software is then used to piece the acoustic signals together into a 3D model.
“Similar to how light refracts or ‘bends’ when it passes through water or any medium dense than air, ultrasound also refracts.
Our image reconstruc-tion algorithms correct for this bending that occurs when the ultrasound waves pass from the water into the air,” said Amin Arbabian, study leader and Stanford associate professor.
While current experiments are being performed in static water, work is being done to transi-tion PASS for use in water with waves, a more challenging task.
In the future, tests will be con-ducted in a larger setting, eventually moving into open-water environments, making PASS and the future of lidar technologies truly boundless. 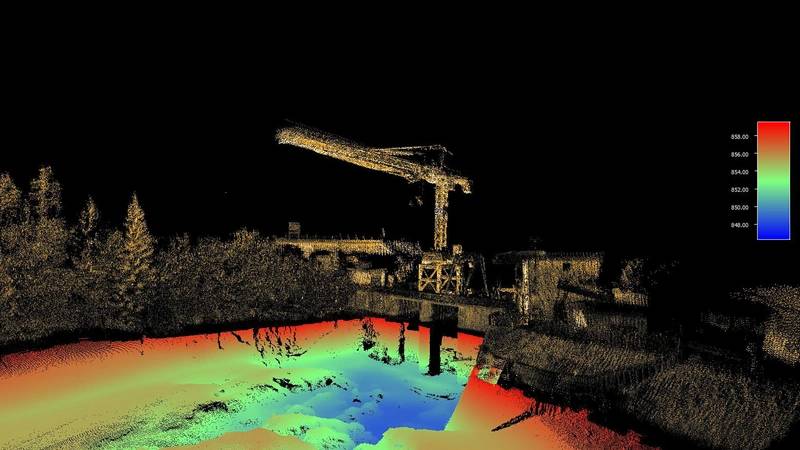 The iLiDAR system conducts 3D data capture of intricate measurements of inshore, nearshore and inland waterways from up to 100 meters away.
© Seabed
A Mappable Future

In an ever-changing world, surrounded by oceans that remain largely a mystery in their com-plexity yet increasingly sensitive to climate change, lidar technology has paved a path towards further exploration and understanding.
Its applications have proliferated beyond protecting sensitive marine and coastal environments.
“Lidar can also be deployed for the updating of nautical charts and most recently, we have deployed it on cable landing sites connected to off-shore wind farms and undersea fiber communication projects.
Moving into the future, this technology will become the standard solution for mapping and ongoing monitoring of the white ribbon around our coastlines,” said Boreland.

Additionally, lidar has found a home in the realms of maritime vessels, security, shipping and container handling, and automated guided vehicles by providing real-time position data on people, objects and port infrastructure.
“Lidar-powered automation can improve efficiency and safety, while also reducing costs and risks in seaport, marine and intermodal terminal opera-tions,” explained Smidt.
“Lidar sensors are becoming a valuable component to port equipment and vehicles, helping to enhance reliability and predictability.”

As lidar becomes more autonomous, affordable, and effective, our opportunities to explore and protect expand as well.
The ticking clock of climate change and human’s unsatiable curiosity are our motivators, pushing the boundaries of what is known in the name of need and knowledge.
This year’s World Oceans Day webinars and social media reinforced the centrality of oceans for maintaining all life on Earth.
Rapidly improving lidar technology and creative, new applications for it represent vectors to achieve that mission.
The resulting solutions and discoveries will be as boundless as the seas below.
Links :
geogarage at 1:40 AM