Engineers from Woods Hole Oceanographic Institution and ship’s crew on the R/V Rachel Carson prepare to launch the Mesobot into Monterey Bay.
MBARI’s “SmartClump” is in the background, awaiting deployment.
Credit: Erik Olsen/WHOI

From Phys by Kim Fulton-Bennett, MBARI

In late June researchers from MBARI joined engineers from Woods Hole Oceanographic Institution (WHOI) to test a new breed of undersea robot designed to open up new avenues of research in the mesopelagic, also known as the ocean's twilight zone.
This vehicle, the Mesobot, originated at WHOI and was developed over the past two years with critical input from scientists and engineers at MBARI, Stanford University, and the University of Texas Rio Grande Valley.
Mesobot is specifically designed to track and study swimming and drifting animals as much as 1,000 meters (3,300 feet) below the surface for up to 24 hours at a stretch.


Mesobot is designed to let scientists observe the twilight zone by autonomously tracking individual animals for hours or even days without disturbing the environment or disrupting their behavior, making it possible to follow individual animals as they take part in the great migration from the twilight zone to the surface and back each day.
Mesobot is also equipped with samplers that will allow it to capture traces of environmental DNA (eDNA) from seawater while on a dive.
The engineering team held their first successful at-sea test in June of 2019.

The Mesobot will extend and amplify previous midwater work by MBARI and other institutions.
For decades, MBARI researchers led by Bruce Robison and Steve Haddock and others have used remotely operated vehicles (ROVs) to study such midwater animals.
Though seldom seen, these creatures help support major fisheries such as tuna and swordfish, provide food for other large animals such as sharks and whales, and help regulate Earth's climate by moving carbon from the surface to deep waters.

The project is being funded by the National Science Foundation, WHOI, MBARI, and the Audacious Project housed at TED.

The multi-institution team designed the Mesobot to be less disruptive to deep-sea animals than most ROVs, equipping it with low-light 4K cameras, red lights that are less visible to animals in the mesopelagic, and large, slow-turning propellers that minimize disturbances in the water.
Cutting-edge computer software also allows the vehicle to track animals or objects underwater for up to 24 hours at a time as they move through their daily vertical migration. 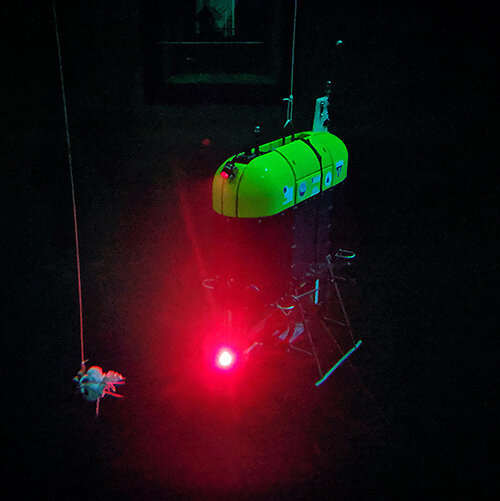 The Mesobot is a hybrid between an ROV, which is powered and controlled using a tether attached to a surface ship, and an autonomous underwater vehicle (AUV), which is programmed at the surface and operates without human intervention while underwater. 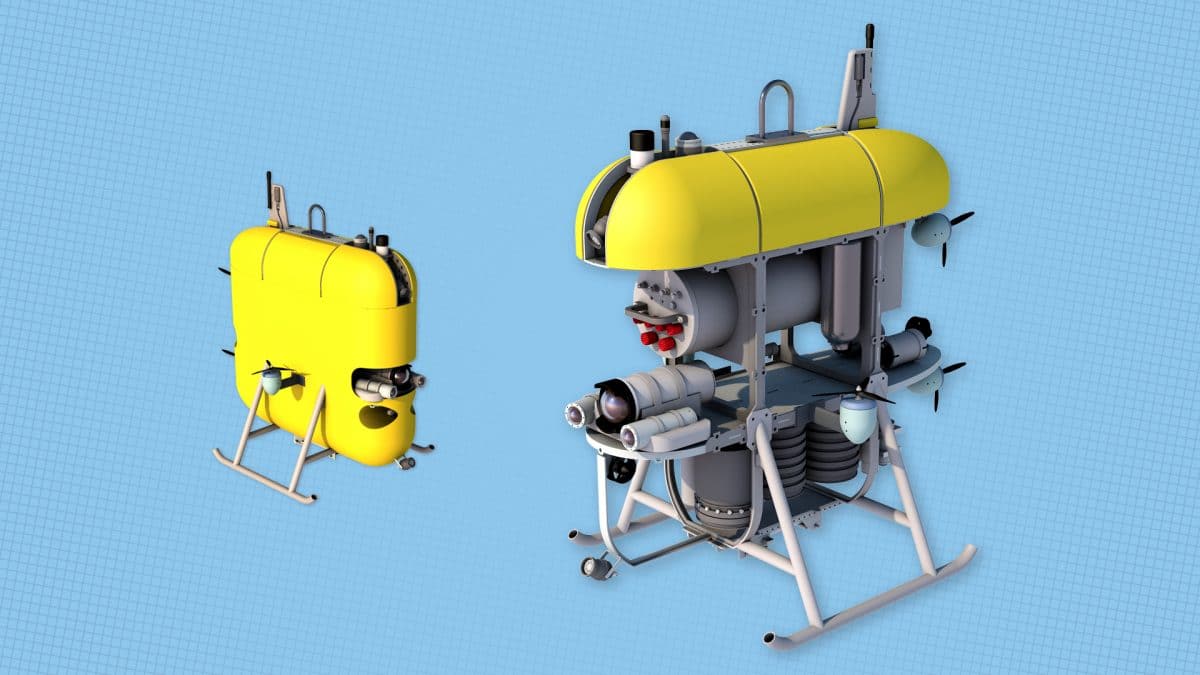 The Mesobot is an autonomous underwater vehicle designed to track animals in the ocean twilight zone without disturbing their environment or behavior.
(Illustration model by Justin Fujii, render by Tim Silva, WHOI Creative)

At the beginning of each dive, operators control Mesobot from the surface like an ROV, using a thin fiber-optic tether.
The researchers then release the tether and spool it back onto the ship, while the robot continues on its own as an AUV.

MBARI staff have been involved in several aspects of the project.
Principal Engineer Kakani Katija, Senior Scientist Bruce Robison, and Mechanical Engineer Brett Hobson were involved in the conceptual design of the vehicle.
The vehicle's main computer system is based on a design developed for MBARI's long-range AUV.
The animal-tracking system is being designed by Software Engineer Mike Risi, along with Katija and MBARI Adjunct and Stanford University Professor Steve Rock, based on a system that has already been tested on several MBARI ROVs.

During the recent field program, the team's engineers assembled the Mesobot and tested it in MBARI's huge indoor saltwater test tank.
After confirming that the vehicle was working properly, they took it out to sea on MBARI's research vessel Rachel Carson for three days of open-water field tests in Monterey Bay. 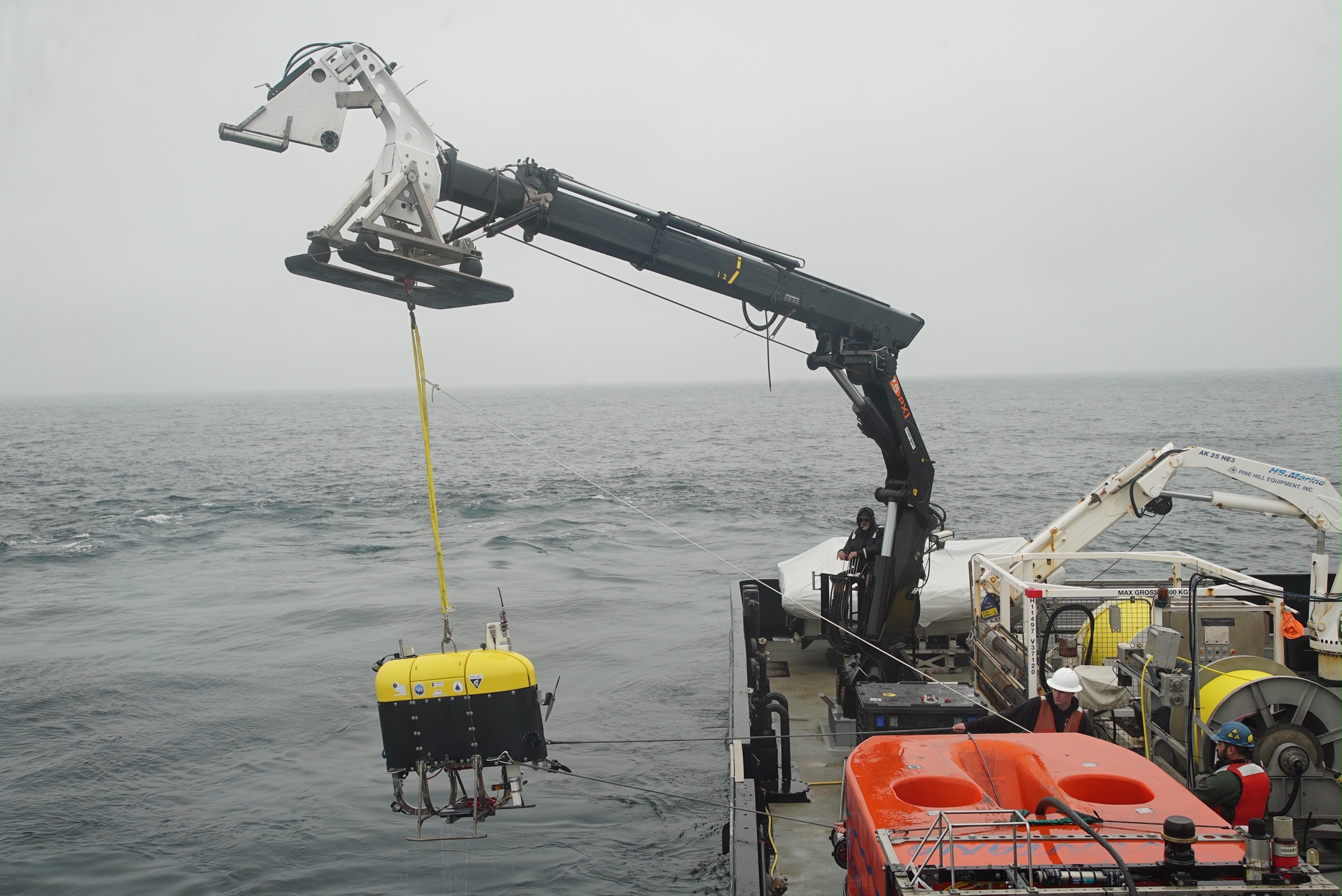 During the field tests, the Mesobot made five dives, each several hundred meters below the surface.
These tests helped the designers test vehicle systems under real-life conditions and refine their methods for launching the vehicle off the side of a rolling ship.
Managing the thin tether presented a particular, but expected, challenge.
"The suite of scientific instrumentation aboard the Rachel Carson and the expert ship handling and deck work were crucial to our success," said Mesobot designer and lead engineer Dana Yoerger.

To help keep an eye on the vehicle and its tether, the team used MBARI's "SmartClump," a weighted bundle of sensors and cameras attached to a tether.
This gives pilots and scientists an overhead perspective that makes underwater operations safer and more efficient.

Eventually the researchers hope to use the Mesobot to perform daylong studies of individual animals or groups of animals as they take part in "diurnal vertical migration"—the largest animal migration on Earth.
Many marine animals (including delicate, soft-bodied jellies) migrate hundreds of meters toward the ocean surface at twilight and then descend back into the depths at dawn.
This phenomenon is still poorly understood.
The researchers hope that the Mesobot will be able to follow individual animals during their migration to learn more about how and why they undergo this strenuous daily journey.