Bodies remodeled for a life at sea

Indonesian divers have evolved bigger spleens to hunt underwater
Researchers have found that Indonesia’s Bajau people, who for generations have spent the majority of their days diving and hunting underwater, also have genetic adaptations for their unusual lifestyle.

From NYTimes by Carl Zimmer

We are the products of evolution, and not just evolution that occurred billions of years ago.
As scientists peer deeper into our genes, they are discovering instances of human evolution in just the past few thousand years.
People in Tibet and Ethiopian highlands have adapted to living at high altitudes, for example.
Cattle-herding people in East Africa and northern Europe have gained a mutation that helps them digest milk as adults. 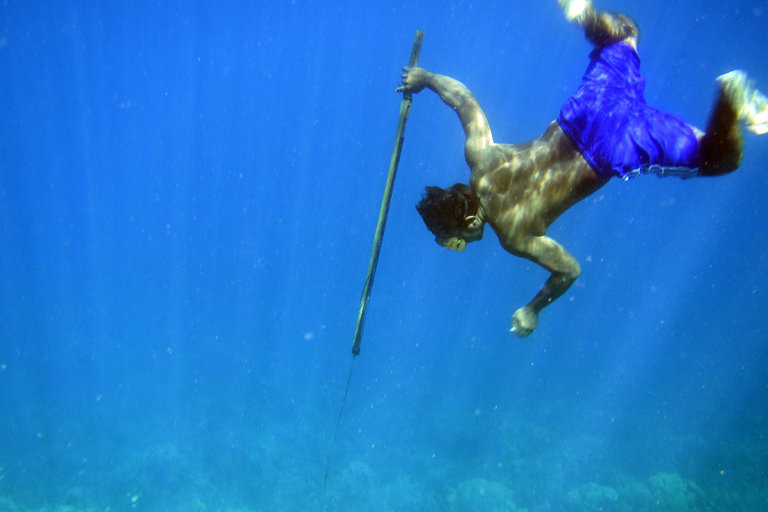 On Thursday in the journal Cell, a team of researchers reported a new kind of adaptation — not to air or to food, but to the ocean.
A group of sea-dwelling people in Southeast Asia have evolved into better divers.

The Bajau, as these people are known, number in the hundreds of thousands, scattered in communities in Indonesia, Malaysia and the Philippines.
They have traditionally lived on houseboats; in recent times, they’ve also built houses on stilts in coastal waters.
“They are simply a stranger to the land,” said Rodney C. Jubilado, a University of Hawaii anthropologist who studies the Bajau but was not involved in the new study. 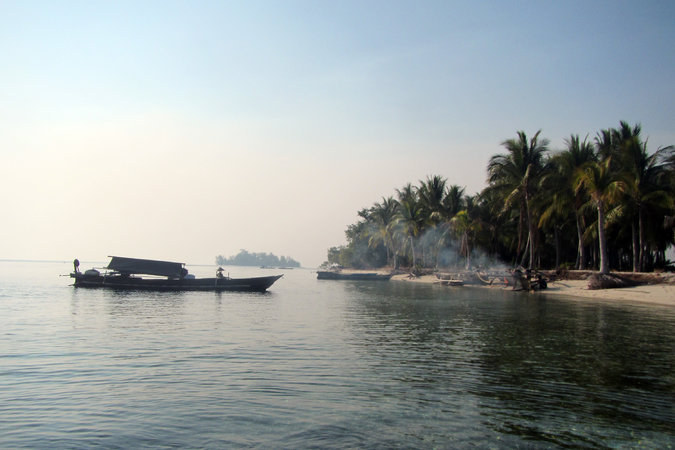 The Bajau people number in the hundreds of thousands and live in houseboats and houses on stilts scattered across Indonesia, Malaysia and the Philippines.
Credit Melissa Ilardo

Dr. Jubilado first encountered the Bajau while growing up on Samal Island in the Philippines.
They made a living as divers, spearfishing or harvesting shellfish.
“We were so fascinated that they could stay underwater much longer than us local islanders,” Dr. Jubilado said.
“I could see them literally walking under the sea.”

Even as anthropologists study Bajau culture, biologists have grown curious about them, too.
Bajau divers been observed plunging more than 200 feet underwater, their only protection a pair of wooden goggles — a physiological marvel.

In 2015, Melissa Ilardo, then a graduate student in genetics at the University of Copenhagen, heard about the Bajau.
She wondered if centuries of diving could have led to the evolution of traits that made the task easier for them.
“It seemed like the perfect opportunity for natural selection to act on a population,” said Dr. Ilardo.

Her first step was to travel to Sulawesi, Indonesia, and then to a coral reef island where she reached a Bajau village.
After she proposed her study, they agreed to the plan.
She returned a few months later, this time with a portable ultrasound machine to measure the size of the Bajau people’s spleens. 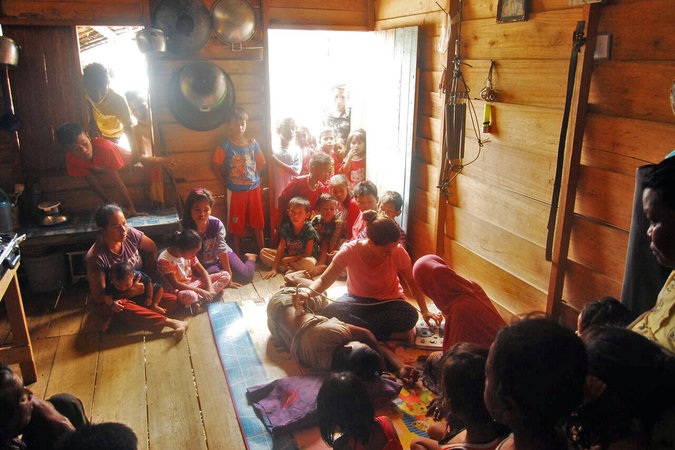 Dr. Melissa Ilardo taking an ultrasound scan of a Bajau diver’s spleen.
Scientists have found that marine mammals with larger spleens can dive deeper — the enlarged spleen acts much like a bigger scuba tank
CreditPeter Damgaard

All mammals have a diving reflex, but marine mammals like seals have a particularly strong one. Scientists suspect that the reflex helps them dive deeper — as it turns out, seals with bigger spleens can dive deepest. An enlarged spleen seems to function like a bigger scuba tank.

Dr. Ilardo scanned the abdomens of the Bajau villagers and then traveled about 15 miles inland to a village occupied by farmers known as the Saluan.
She scanned them, too.
When Dr. Ilardo compared scans from the two villages, she found a stark difference.
The Bajau had spleens about 50 percent bigger on average than those of the Saluan.

Yet even such a remarkable difference might not be the result of evolution.
Diving itself might somehow enlarge the spleen.
There are plenty of examples of experience changing the body, from calloused feet to bulging biceps.

Only some Bajau are full-time divers.
Others, such as teachers and shopkeepers, have never dived.
But they, too, had large spleens, Dr. Ilardo found.
It was likely the Bajau are born that way, thanks to their genes. 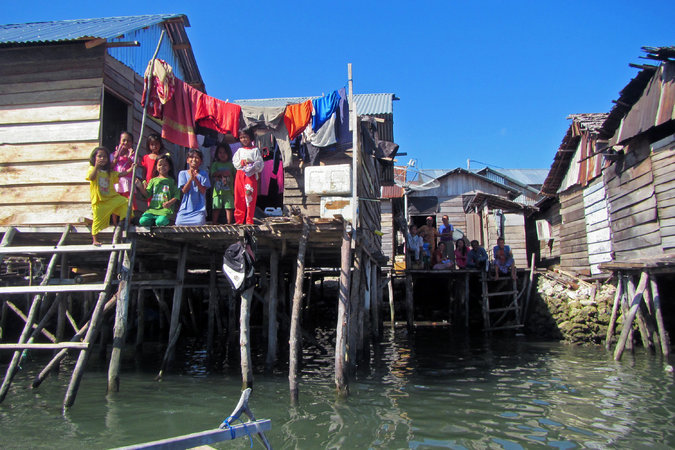 Bajau homes built on stilts.
Only some Bajau are full-time divers, while others are teachers and shopkeepers, but Dr. Ilardo found that all Bajau had enlarged spleens.
Credit Melissa Ilardo

On her visit to Sulawesi, Dr. Ilardo also took mouth swabs from the Bajau and Saluan from which she extracted DNA.
She looked at the genetic variations in each village and compared them to people from neighboring countries, such as New Guinea and China.

A number of genetic variants have become unusually common in the Bajau, she found.
The only plausible way for this to happen is natural selection: the Bajau with those variants had more descendants than those who lacked them.
One variant of a gene called PDE10A influenced the size of spleens in the Bajau.
People with one copy of the mutant gene had bigger spleens than those with none. People with two copies had even bigger spleens.
Scientists had never found a special role for PDE10A in the spleen.
“This connection was a bit bizarre,” Dr. Ilardo said.

But there’s one possible link.
PDE10A has been shown to control the level of thyroid hormone in the body.
And scientists have found that injecting thyroid into mice with stunted spleens can make the organs grow larger.
Still, that wouldn’t pin down exactly how PDE10A became so common in the Bajau.
“It’s the question that’s harder than others,” said Rasmus Nielsen, a geneticist at the University of California, Berkeley, who collaborated with Dr. Ilardo. 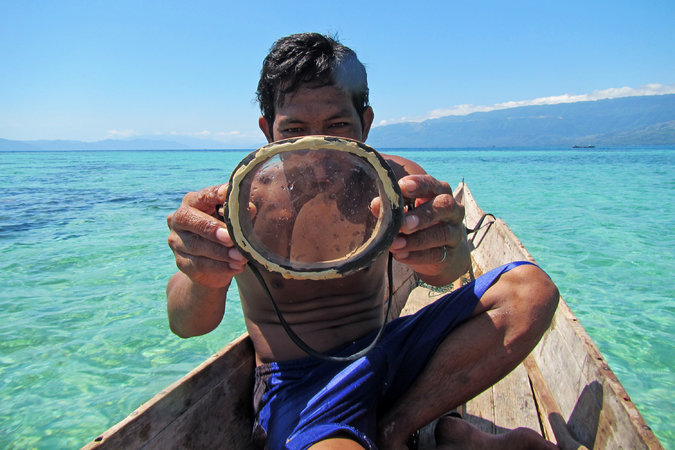 A diver with a traditional wooden mask.
Some researchers suspect the Bajau only began diving when Chinese demand for sea cucumbers rose in the 1600s.
Other experts believe the Bajau began earlier, at the end of the last Ice Age, when rising sea levels turned the region into islands.
Credit Melissa Ilardo

For her own part, Dr. Ilardo suspects that natural selection favored the Bajau variant of PDE10A because deep diving is so risky.
“I would think, as morbid as it is, that if they didn’t have this, it would kill them,” she said.

François-Xavier Ricaut, an anthropologist at the University of Toulouse who was not involved in the study, said that it wasn’t clear yet how quickly this evolutionary change happened.
Some researchers suspect the Bajau only began diving to great depths when a market for sea cucumbers opened up in China in the 1600s.
Or perhaps the adaptation began thousands of years earlier, at the end of the Ice Age, when rising sea levels turned the region around Indonesia into islands.
“This study acts as a cornerstone for exciting questions to follow,” said Dr. Ricaut.

Dr. Ilardo said there were likely a number of other genes that help the Bajau dive.
She and her colleagues also found evidence for natural selection on a gene called BDKRB2.

In a study published last year, Russian scientists discovered that it plays a role in the diving reflex.
In people with variants of BDKRB2, blood vessels are more tightly constricted when they plunge their faces into cold water.

To see if that’s the case with the Bajau, Dr. Ilardo will need to take another trip to beautiful Sulawesi. “I would be happy doing this as long as I can,” she said.