SpaceX, the aerospace company founded by the Mars-hungry tech entrepreneur Elon Musk, just made a big move to enshroud the planet in high-speed internet coverage.
On November 15, the company filed a lengthy application with the Federal Communications Commission (FCC) to launch 4,425 satellites.
(We first heard about the filing through the r/SpaceX community on Reddit.)
That is a hell of a lot of satellites.
According to a database compiled by the Union of Concerned Scientists, there are 1,419 active satellites currently orbiting Earth.
There are estimates of roughly 2,600 satellites that no longer work floating in space, but even factoring those in, SpaceX's planned fleet would be larger than everything already in space.
Some of the biggest telecommunications satellites can weigh several tons, be the size of a bus, and orbit from a fixed point about 22,000 miles (35,000 km) above Earth.
After we took a look at SpaceX's FCC application, though, it seems these won't be your typical telecommunications satellites.
Each satellite in SpaceX's planned constellation will weigh about 850 lbs (386 kg) and be roughly the size of a MINI Cooper car.
They will orbit at altitudes ranging from 715 miles (1,150 km) to 790 miles (1,275 km).
From this lofty vantage point, SpaceX says each satellite could cover an ellipse about 1,300 miles (2,120 km) wide.
That's about the distance from Maine to the Florida panhandle.
"The system is designed to provide a wide range of broadband and communications services for residential, commercial, institutional, governmental and professional users worldwide," SpaceX wrote in its application.

SpaceX's filing with the FCC outlines a two-phase launch plan.
To get the party started, SpaceX wants to send up 1,600 satellites at one orbital altitude, then follow up with another 2,825 satellites placed in four shells at different altitudes.
"With deployment of the first 800 satellites, SpaceX will be able to provide widespread U.S. and international coverage for broadband services," SpaceX wrote.
"Once fully optimized through the Final Deployment, the system will be able to provide high bandwidth (up to 1 Gbps per user), low latency broadband services for consumers and businesses in the U.S. and globally."

A speed of 1 Gbps globally would be huge.
The global average for internet speed in late 2015, according Akamai's "State of the Internet" report, was 5.1 Mbps per user — about 200 times slower than SpaceX's target — with most of the higher speeds tied up in cable and fiberoptic connections.
SpaceX also makes the point in its filing's legal statement that, according to a July 2016 report by UNESCO's Broadband Commission for Sustainable Development, "4.2 billion people (or 57% of the world’s population) are offline for a wide range of reasons, but often also because the necessary connectivity is not present or not affordable."
Bathing the planet in internet is one way to get those people online. 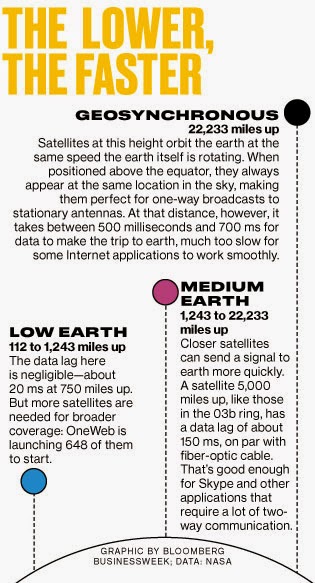 Here are some more details directly from SpaceX's filing, which are notable: 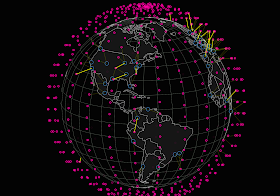 Musk is not alone in recognizing the market potential.
Besides investing in Musk’s project, Google is working on a high-altitude balloon-based Internet delivery system called Loon.
Facebook is developing high-altitude, high-endurance drones to deliver Internet capability to remote areas.
Richard Branson’s Virgin Galactic and Qualcomm, meanwhile, are investing in a competing venture called OneWeb, which aims to build a similar network of micro-satellites.
These projects would be similar in concept to the space-based systems, while operating within the Earth’s atmosphere.
Musk first discussed the unnamed satellite constellation project back in January 2015, later filing for an FCC application to test basic technologies that'd support it.

At the time, Musk said during a SpaceX event (our emphasis added):

"The focus is going to be on creating a global communications system. This is quite an ambitious effort. We're really talking about something which is, in the long term, like rebuilding the Internet in space. The goal will be to have the majority of long distance Internet traffic go over this network and about 10% of local consumer and business traffic. So that's, still probably 90% of people's local access will still come from fiber but we'll do about 10% business to consumer direct and more than half of the long distance traffic."

According to a June 2015 story by Christian Davenport at The Washington Post, Google and Fidelity invested $1 billion into Musk's company, in part to support the project.
So it's a good guess that if and when the network becomes functional, those companies would partly assume control of it.
(Google parent company Alphabet is also working on its own effort to beam internet connectivity from the skies using satellites, balloons and drones.)
The filing comes just two months after a SpaceX rocket exploded during a routine launchpad test.
It was carrying the $200 million AMOS-6 satellite, which Facebook intended to license to beam free internet to parts of Africa.
Business Insider contacted SpaceX for more details on the project, including its projected timeline and how the satellites would be launched (presumably through Falcon 9 and Falcon Heavy rockets), but representatives did not immediately answer our questions.